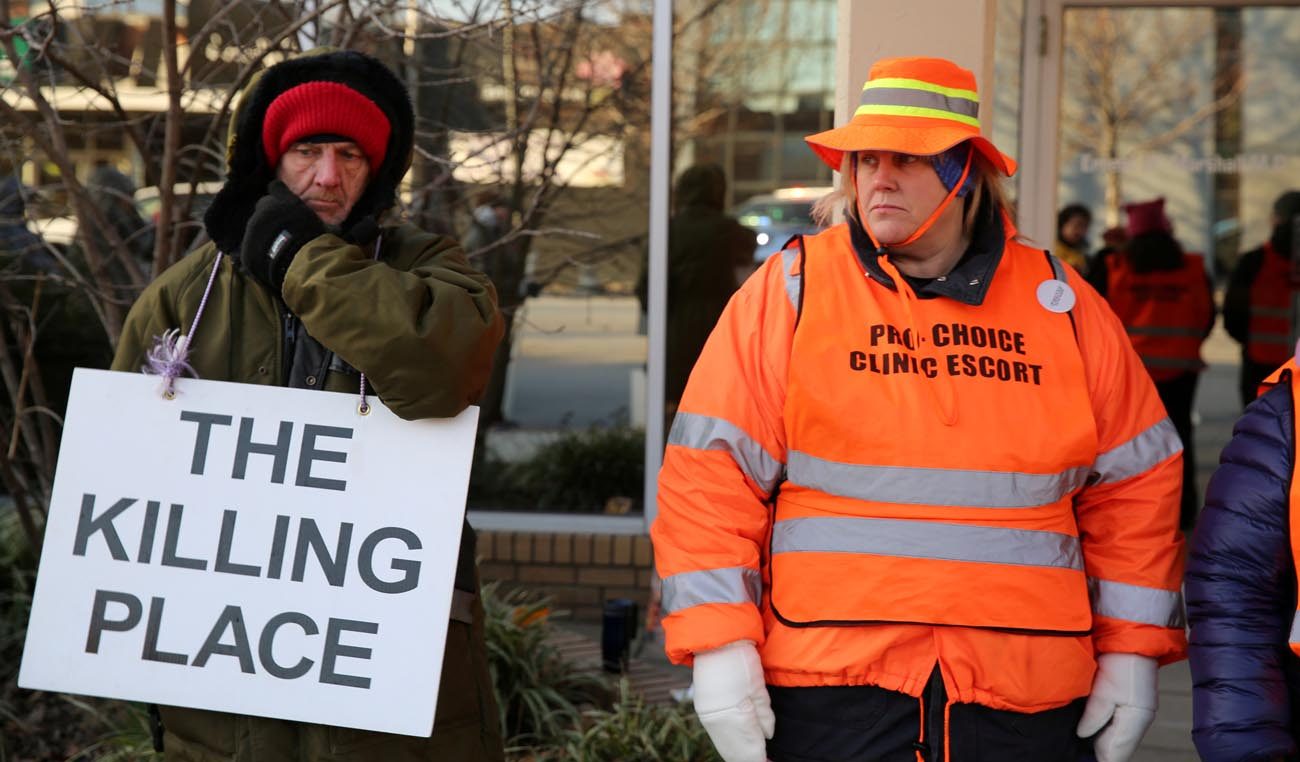 A protester, left, and an escort who ensures women can reach the clinic stand outside the EMW Women's Surgical Center in Louisville, Ky., in this Jan. 27, 2017, photo. Abortion, death penalty, assistance for the poor and affordable housing are among the issues state legislatures have been tackling this year. (CNS photo/Reuters)

WASHINGTON (CNS) — Assisted suicide, abortion restrictions, health insurance coverage of abortion, financial aid for nonpublic schools and some tax relief for low-income families are among the issues being tackled by state legislatures across the country.

In Connecticut and Massachusetts, two of the states where the legislature is still in session, efforts to pass bills to allow doctors to prescribe lethal medication to terminally ill patients ended with no success. News reports said the measures have been shelved.

In Massachusetts, opponents of assisted suicide credited the backlash lawmakers received over the bill from doctors around the state with effectively killing the bill.

In Connecticut, the state Catholic conference said the “failure of the physician-assisted suicide bill will help preserve quality and truly compassionate health care in our state.”

The conference also noted the failure of another “onerous proposal” that would have hurt the state’s pregnancy centers. The measure was similar to a California law being fought now at the U.S. Supreme Court that requires pro-life pregnancy centers in the state to visibly display information about abortions to their clients that the centers say violates their right to free speech.

“The doors of our state’s pregnancy care centers will remain open and they will be able to remain faithful to their mission, continuing to give women a true choice in Connecticut,” said the Catholic conference, the public policy arm of the state’s Catholic bishops.

In Washington state, all health insurance plans that cover maternity care now must cover elective abortions and provide a co-payment and deductible-free coverage for all contraceptive drugs and devices, and voluntary sterilization procedures.

After approving changes made by the House, the Senate passed the measure March 3 (the regular session ended March 8) and Democratic Gov. Jay Inslee signed it into law March 21. It has no religious exemption.

The Catholic bishops of Washington had urged Inslee to veto the bill in a March 5 letter. They also reminded him of multiple conversations they had had with him to make “our position on this matter clear.” The bishops said they also made their objections clear in speaking to “numerous legislators,” including the leadership in both chambers, and testifying in both the House and Senate.

At a minimum, they urged a conscience clause be included to protect those who object on moral grounds to providing such coverage.

“By mandating abortion coverage in state insurance plans, this legislation represents an assault on a foundational teaching of our faith: the inherent dignity of every human person from the moment of conception until natural death,” they said.

“This principle leads us to reject policies that promote abortion, and it is the same principle that compels us to care for the poor and vulnerable in our communities and to oppose the death penalty,” they added.

In a March 6 open letter to elected officials in New Mexico, the state’s Catholic bishops said that on behalf of children of New Mexico they were “very appreciative some appropriations for early childhood programs have been made” but said it was not enough.

“Our state has the resources to address these problems,” they added, and urged elected officials to keep their focus “on the issue at hand: the plight of our children living in extreme poverty.” New Mexico’s legislative session adjourned in mid-February.

Two pieces of legislation under consideration by Pennsylvania lawmakers, who meet throughout the year, would ban the practice of selectively aborting unborn babies with Down syndrome.

“Studies show that as many as 90 percent of babies in the United States who are diagnosed with Down syndrome in the womb are aborted,” said Bishop Ronald W. Gainer of Harrisburg, Pennsylvania. “We must do all that we can to ensure that the life and dignity of every person is respected and protected, at every stage and in every condition.”

Mississippi Gov. Phil Bryant signed into law the most restrictive state abortion bill in the nation because it bans abortions after 15 weeks of pregnancy. The Mississippi House passed the measure 75-34 in February. The state Senate passed H.B. 1510 March 6 in a 35-14 vote. Bryant signed the bill March 19; the next day a federal judge temporarily blocked the law after the state’s only abortion clinic filed suit, saying it is unconstitutional.

The state’s Catholic bishops commended Bryant. “(We) wish to reaffirm the sacredness of human life from conception until natural death,” said Bishop Joseph R. Kopacz of Jackson and Bishop Louis F. Kihneman III of Biloxi. “With Pope St. John Paul II, we recognize abortion as ‘a most serious wound inflicted on society and its culture by the very people who ought to be society’s promoters and defenders.'”

Maryland’s General Assembly passed a state budget with “significant funding increases for Catholic and other nonpublic schools,” the Maryland Catholic Conference said in a statement March 29. The funding provides for additional school safety measures and scholarship assistance for low-income students and students with special needs.

The Nonpublic Aging Schools Program — which this year was named the “Senator James E. “Ed” DeGrange” program by members of the Senate — will now provide $7 million for capital improvements to Catholic and other nonpublic schools as part of the fiscal year 2019 capital budget.

It continues to provide $3.5 million for deferred maintenance and infrastructure repairs and renovations, as well as an additional $3.5 million to assist schools in making their schools safer for their students. Schools will receive funding for security upgrades on a per-pupil basis, with higher amounts going to schools with greater numbers of lower-income students.

The Broadening Options and Opportunities for Students Today program, which provides scholarship assistance to low-income students, was funded for a third straight year at $7.6 million, an increase of approximately $1.6 million for this popular and growing program. For the upcoming school year, a portion of the program’s funding will be directed to assist students with special needs.

Mary Ellen Russell, Maryland Catholic Conference executive director praised DeGrange. “His efforts will have a lasting effect on the lives of students throughout Maryland in both public and nonpublic schools. He has been a tireless and dedicated public servant for the people of Maryland, as well as a dear friend to the church and so many others in Annapolis,” the state capital.

When the final gavel sounded at midnight March 8 in Utah, lawmakers left several bills on the board without a final vote. As per the Utah Constitution, the state Legislature must end its session at midnight on the 45th day even if not all proposed bills have passed through the entire legislative process.

Among these was a bill to strengthen Utah’s Stand Your Ground law, also known as the shoot first and ask questions later bill. This was one of several bills that the Diocese of Salt Lake City was tracking, in keeping with Catholic Social Justice advocacy.

One of two abortion-related bills considered this session passed. S.B. 118 updates and improves the state’s informed consent law regarding abortion by updating informed-consent pamphlets and video.

The Down Syndrome Nondiscrimination Abortion Act did not get a final vote in the Senate. The bill would have made it a crime for a doctor to perform an abortion if he or she knew the women seeking the abortion wanted to do so because the baby had been diagnosed with Down’s syndrome.

On the other end of the sanctity of life spectrum, a measure passed by a House committee to end the practice of state executions was pulled from the House floor by its sponsor before it could be voted on by the full body.

Legislators did pass a measure clearly stating that assisting a suicide is a crime. Another approved measure waives the $20 fee for obtaining a birth certificate for people experiencing homelessness. For many who live on the streets, one major barrier to gaining employment and housing is a lack of identification. Lawmakers also voted to waive fees for professional licensing for individuals who are receiving public assistance, again reducing barriers to work.

However, individuals in poverty will still struggle to find affordable housing after a $100 million bond bill failed to pass. Utah legislators also refused to eliminate the sales tax on food.

Contributing to this story was Jean Hill in Salt Lake City.

NEXT: University says Facebook rejected ad because it shows Jesus on cross