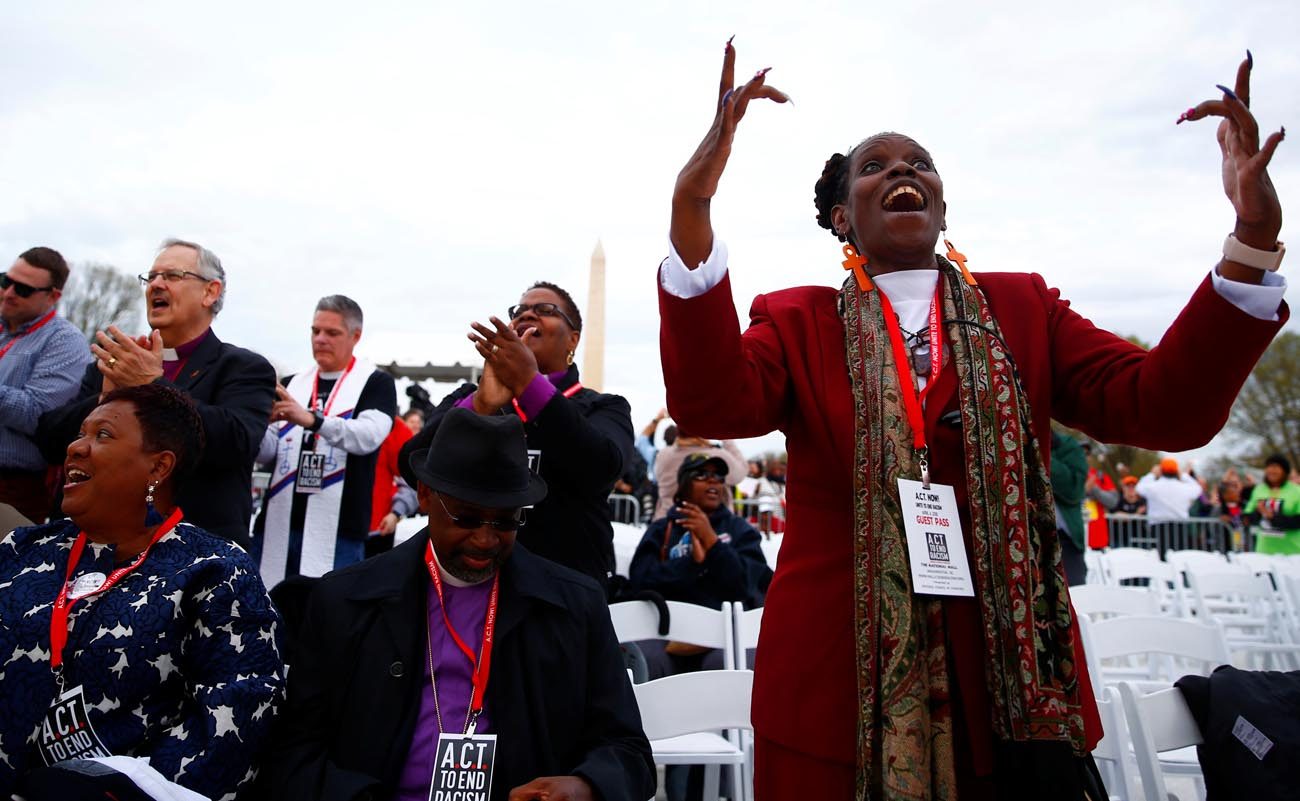 Attendees are seen during an "A.C.T. to End Racism" rally on the National Mall in Washington April 4. The rally marked the 50th anniversary of the assassination of civil rights leader the Rev. Martin Luther King Jr. (CNS photo/Eric Thayer, Reuters)

WASHINGTON (CNS) — Fifty years after the assassination of the Rev. Martin Luther King Jr. — he was gunned down April 4, 1968 — the great civil rights advocate continues to be an outstanding example of how to live the Gospel message, according to Catholic clergy and others.

“This tragic loss (of Rev. King) did not still his voice — it continues to ring out and inspire new generations in confronting the challenges of prejudice, injustice and division today,” Cardinal Donald W. Wuerl of Washington wrote in an April 4 blog.

At dawn, several people gathered at the Martin Luther King Jr. Memorial near the National Mall in Washington for a silent prayer to remember the life and legacy of Rev. King.

Various faith leaders, including Washington Auxiliary Bishop Roy E. Campbell, spoke at a rally on the Mall that followed the prayer service at the memorial. The Archdiocese of Washington sponsored a “Catholics Against Racism” banner at the rally with local Catholics marching behind it. Some participants carried small signs with the same message.

Toward evening churches across the country planned to toll their bells 39 times, symbolizing the civil rights leader’s age when he was killed in Memphis, Tennessee.

Since the news of his murder, “rippled across the country,” bells at the National Civil Rights Museum in Memphis and the King Center in Atlanta will toll at 6:01 p.m. (CDT) — the approximate time Rev. King was killed; in the city of Memphis at 6:05 p.m. (CDT); and at 6:05 p.m. (CDT) nationally.

Other churches ringing their bells included St. Patrick’s Cathedral in New York City and the Basilica of the National Shrine of the Immaculate Conception in Washington. Near the shrine are the headquarters of the U.S. Conference of Catholic Bishops, which announced it joined in solidarity in the shrine’s tribute to Rev. King’s “legacy and his many contributions including the principle of nonviolent resistance.”

“The moment is also an opportunity for us to pause and reflect individually on what we are doing to build the culture of love, respect and peace to which the Gospel calls us and to also ask ourselves how we seek to help our brothers and sisters still suffering under the weight of racism,” the USCCB said.

In a statement issued March 28, the U.S. bishops’ Administrative Committee said that on this King anniversary, “we need to ask ourselves if we are doing all we can to build the culture of love, respect and peace to which the Gospel calls us.”

Rev. King was “a man of God who, like a modern-day Moses had led people on a journey of hope toward freedom,” Cardinal Wuerl wrote in his blog. “It was Dr. King’s steadfast faith which saw him through many dark nights, and it is that faith that calls us to continue his work and see that his unfulfilled dream is more fully realized.”

That call to continue the work of the late civil rights leader was echoed by Bishop Campbell in an interview ahead of the anniversary.

“His (Rev. King’s) legacy has to be carried forth. It is the only way to realize that we are all God’s children and we need to treat each other the way we would treat our own brothers and sisters,” Bishop Campbell told the Catholic Standard, the archdiocesan newspaper.

Rev. King tried “to end injustice and discrimination against all God’s people,” he said, adding that his message was “to judge people by who they are, and not by their superficial bearing, how they look, their height, their sex, their culture, their color.” 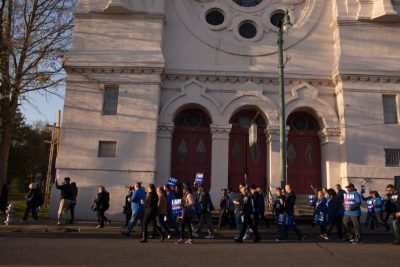 People walk along Beale Street in Memphis, Tenn., April 4, during a march and rally that was part of the observance of the 50th anniversary of the assassination of the Rev. Martin Luther King Jr. (CNS photo/Rick Musacchio, EPA)

In Memphis, Bishop Martin D. Holley, a former Washington auxiliary bishop who now heads that diocese, celebrated Mass in that city’s Cathedral of the Immaculate Conception and then joined Catholic and other religious leaders in a march to the National Civil Rights Museum. The museum includes the Lorraine Motel where Rev. King was shot, and the nearby boarding house from which Ray fired the fatal shots.

Across the country, San Francisco Archbishop Salvatore J. Cordileone said that as the nation marks this 50th anniversary, “we recognize that too much of our present reality is not so different from that of 1968. Many in our country continue to suffer from racism, violence and discord — accompanied by feelings of hopelessness and dismay.”

“We can make an invaluable contribution simply by living the civility that is within is,” the archbishop said in a statement. “Our times are plagued by rancor, name-calling, detraction and polarization.

“Let us draw strength, guidance and inspiration from Dr. King by being civil with each other, especially with those we dislike and with whom we disagree. This is how we live his witness to nonviolence in everyday life, and so prove ourselves worthy of his legacy.”

In Baltimore, Archbishop William E. Lori and several Baltimore-area faith community leaders have planned a special interfaith and ecumenical prayer service in honor of Rev. King April 12 at the Cathedral of Mary Our Queen in Baltimore. The Rev. Rafael G. Warnock, pastor of Ebenezer Baptist Church in Atlanta, will be guest preacher. Rev. King was pastor of Ebenezer Baptist for several years before his assassination.

Earlier this year, Archbishop Lori issued a pastoral reflection on the enduring power of Rev. King’s principles of nonviolence.

At the church, the service was to include readings by different individuals of six brief prayers from the words Rev. King prayed at various events.

Back in Washington, Msgr. Raymond East, pastor of St. Teresa of Avila Parish, recalled how the nation’s capital was among cities across the country that saw rioting, the burning of buildings and other violence as people reacted to the news of Rev. King’s death.

Such events “are remembrances that are really fresh” for some of his parishioners, he told the Catholic Standard.

Msgr. East, who was a senior in high school in San Diego at the time, recalls not only the protests following Rev. King’s death, but also “the great feeling of sadness and looking for direction on how to peacefully bring about change.”

“Fifty years later, what has become clear is the vision Dr. King had of the ‘beloved community’ as a place, a condition of the world in which we reflect what we pray in the Lord’s Prayer — ‘thy kingdom come on earth as it is in heaven,'” Msgr. East said. 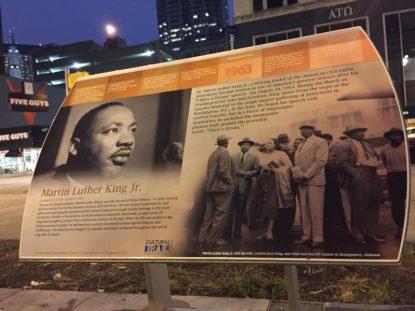 A memorial honoring the life and work of the Rev. Martin Luther King Jr. is seen April 2 in Indianapolis. Robert Kennedy delivered a speech in Indianapolis April 4, 1968, the day the civil rights leader was assassinated in Memphis, Tenn. (CNS photo/Natalie Hoefer, The Criterion)

The Baptist preacher used “beloved community” in his speeches to denote a society in which racism and discrimination is ended by nonviolent means and reconciliation.

“We have to keep that goal always in front of us,” Msgr. East said. “It is kind of keeping the dream alive when we take the idea of ‘beloved community’ as our ideal.”

Both Bishop Campbell and Msgr. East noted that Rev. King lived a life that showed he was a follower of Jesus Christ.

“He (Rev. King) tried to live like Christ, being non-violent and seeing God in all people,” Bishop Campbell said.

Msgr. East said that Rev. King “taught us to care about each other and he taught and spread the good news of Jesus Christ.”

“When his family was threatened — his wife and children were spit upon and threatened — he still loved. That is proof of his idea of the suffering servant,” Msgr. East said. “His faith was put to the test, but he met the test with the grace of God.”