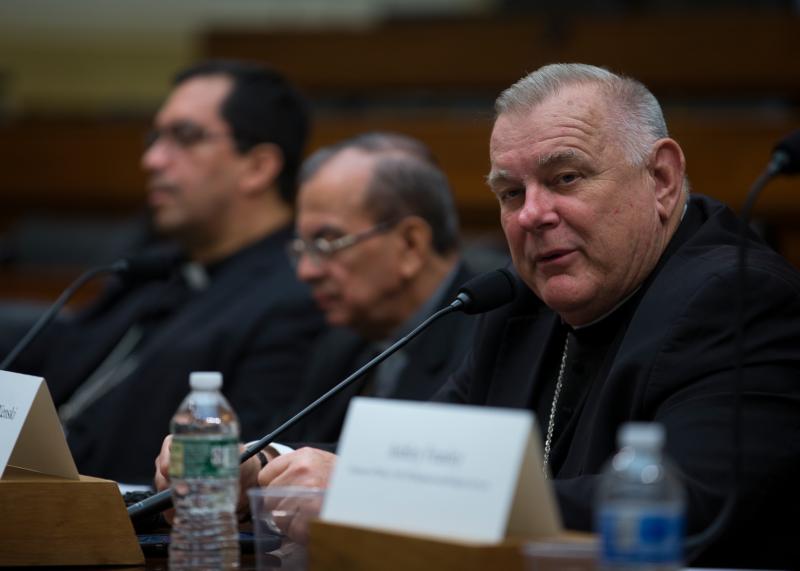 WASHINGTON (CNS) — When a house is on fire, you don’t lock the doors to the outside to help save the people trapped inside, but that’s what U.S. policy is doing when it brings to an end two immigration programs that have helped more than 200,000 Salvadorans live, study and work in the U.S., said a U.S. archbishop April 13.

Miami Archbishop Thomas G. Wenski made the comments as as he joined Salvadoran bishops in Washington on a panel about the roots causes of poverty, violence and migration.

Archbishop Wenski accompanied Archbishop Jose Luis Escobar Alas of San Salvador, Cardinal Gregorio Rosa Chavez and two other Salvadoran bishops on the last day of a historic visit by the prelates to plead with U.S. lawmakers to protect through legislation Salvadorans who benefit from Temporary Protected Status and the Deferred Action for Childhood Arrivals programs.

Returning the combined 215,000 Salvadorans who benefit from those programs to the country’s unrelenting violence and economic instability would mean devastating the nation further, breaking up families in the process and taking away the only income some families have, they said.

TPS and DACA provide work permits and other protections to immigrants who meet certain criteria. The Trump administration announced these programs were ending. The future of DACA is temporarily tied up in the courts and also is pending action from Congress, which has expressed willingness to provide protection for the beneficiaries in some form. TPS recipients from El Salvador, however, have been told to get their affairs in order by the time the program expires in September 2019.

Archbishop Escobar said El Salvador does not want to see its people leave but often it’s not a choice.

“If people leave, it’s because of the situation in the country,” including the violence at the hands of gangs that affects the poor and working class and the lack of opportunities that sometimes drive youth to join the violence, the archbishop said.

Archbishop Escobar said the meetings in Washington, facilitated by officials from U.S. Conference of Catholic Bishops’ Migration and Refugee Services and Catholic Relief Services, were to express the need to keep the immigration programs alive. They also were a chance to tell U.S. officials that the country needs aid to develop economic opportunities for its people, not just to combat violence. After all, poor economic conditions have been largely to blame for the country’s history of violence.

Social exclusion, idolatry of money, impunity, corruption and individualism have been to blame for the problems that led to a 12-year civil war in the 1980s and early 1990s, but also for the current strife, Archbishop Escobar said.

Cardinal Rosa Chavez, who said he works with a program that reaches out to gang members, explained that he has spoken to some of the youth and asked them why they felt the need for violence. He also, he said, has asked them why they were willing to accept the help the church was giving them.

Some of them spoke of bad environments, at home or in their neighborhood, and said they went to the church programs because they felt loved. That helped him realize that people are like fish in a tank, he said. If you don’t have clean conditions in the water, the fish get upset and fight each other. But if the water is clean, the fish are happy, he said.

“We need to change the water,” meaning the environment which some folks are surrounded by in El Salvador and that means changing their economic and other conditions, he said.

Even those who victimize, “they, too, are victims,” he said.

The bishops said sending Salvadorans back would only create a bigger problem, not to mention that those who have left have already found a way to thrive in their adoptive country, including many who are vibrant members of faith communities.

“To think that El Salvador could absorb 200,000 people at this time is not realistic,” said Archbishop
Wenski. “To send these people back would not be sending them back home. Home is here. It’s not there. Home is here. The bishops of El Salvador recognize that. So do the bishops in the United States.”

NEXT: Conference looks at how to preserve religious orders’ archives