Documentarian: Vanier’s world of L’Arche communities ‘makes sense to me’ 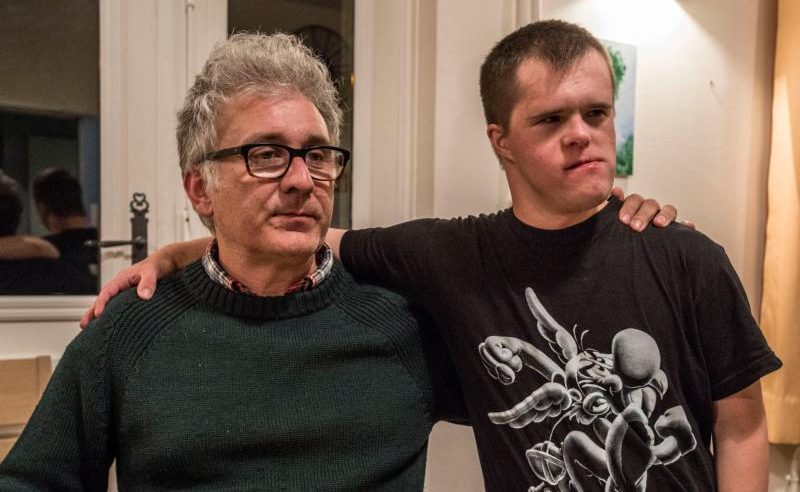 Randall Wright, who directed the documentary “Summer in the Forest” about the L’Arche communities founded by Canadian Jean Vanier, poses with David, a resident who has Down syndrome. L’Arche, French for “The Ark,” brings together people with intellectual or physical disabilities into an intentional-living situation with able-bodied people who share life with them and treat them as equals. (CNS photo/Abramorama)

WASHINGTON (CNS) — Randall Wright, who made the film documentary “Summer in the Forest” on the L’Arche communities founded by Canadian Jean Vanier, said Vanier’s world “makes sense to me.”

Wright knows of which he speaks. “I work in film and television — where you can imagine there are a lot of egos and lot of fantasies and a lot of anxieties,” he told Catholic News Service in an April 6 telephone interview from his home in London. “I’ve spent lots of time in very broken parts of the world. Jean Vanier’s world makes sense to me. I’ve seen a lot of wars, I’ve seen a lot of problems on the planet. It was exciting to see a world that makes sense.”

L’Arche, French for “The Ark,” brings together people with intellectual or physical disabilities into an intentional-living situation with able-bodied people who share life with them and treat them as equals. Nearly all of them are faith-based, although not all are Catholic.

“People in a sense feel liberated with an encounter with L’Arche,” said Wright, who identified himself as a Catholic “very strongly, very much so.”

“For me it was to do with my great-aunt, who was someone with an intellectual disability and somewhat rejected by the family,” he recalled. “I met her when I was 4 and she had a distorted face and she would come and pick me up. … My grandparents had a conventional view of Aunt May and felt she needed to be separated by the rest of the family. There was a feeling in the family of strangeness and I felt very frightened of her.”

By the time he reached his late 40s, Wright said, “I was just trying to work out why I had these feelings.” He was invited to a party given by a L’Arche community in London “in the basement of the church and I went in. I went down. It was a wonderful occasion.”

Wright had been tipped off to Vanier and L’Arche by one of his documentary subjects: Sister Wendy Beckett, the now 88-year-old Sister of Notre Dame de Namur who made a splash on television on both sides of the Atlantic in the 1990s with her programs on art criticism. Wright was her director. While filming throughout Europe, Wright would go to daily Mass with her.

One morning Sister Wendy lamented, “In some ways, I’m famous for talking about art. What I wanted to be famous for was being good.” Wright said she then recommended Vanier to him as “one of the people who was closest to Jesus and I should consider making a film for Jean Vanier. I had some knowledge of him a long time ago,” largely from books.

“Then strongly coincidence, a friend of mine whom I know very, very well — she’d once been the manager (at a L’Arche house) — I told her I was very interested in the whole subject,” Wright recalled. She replied, “If you want to look into it more, you can make Jean Vanier next week. He’s coming through London.” “I just had to put the brakes on and meet him,” he said.

Before setting out to make “Summer in the Forest,” Wright said he thought, “It’ll be impossible to make a film. There’s no money. But I discovered quite quickly that people who get Jean Vanier see him as one of the world’s most incredible figures.” Obtaining permission for individuals to be filmed proved the hardest nut to crack, but “there’s a long trail of paper” proving permissions were obtained, he added.

“In one sense you could argue that the film is about power. It’s about the weak speaking to the powerful. I couldn’t make them do anything. They already trusted me totally. It was on me to trust them. I had to give up my normal techniques and be prepared to accept that what was being offered might contain something profound.”

Wright was not disappointed.

Sister Hosea Rupprecht, in her review of the film for CNS, called it “gentle, loving portrait” of Vanier, “a man with those same qualities.” She added, the documentary “provides inspiration and a glimpse of what our world could be like if we all practiced just a little more compassion and treated everyone with the consideration they deserve.” It is classified A-II– adults and adolescents — for one crude term.

One highlight of Wright’s time with L’Arche was a three-day conversation with the residents of one house solely on the parable of the good Samaritan.

“I had a uniquely privileged insight into the culture of L’Arche,” he told CNS, “which Jean said is not about utopia, it’s very much about humanity and facing reality with great hope and great confidence and great faith.”