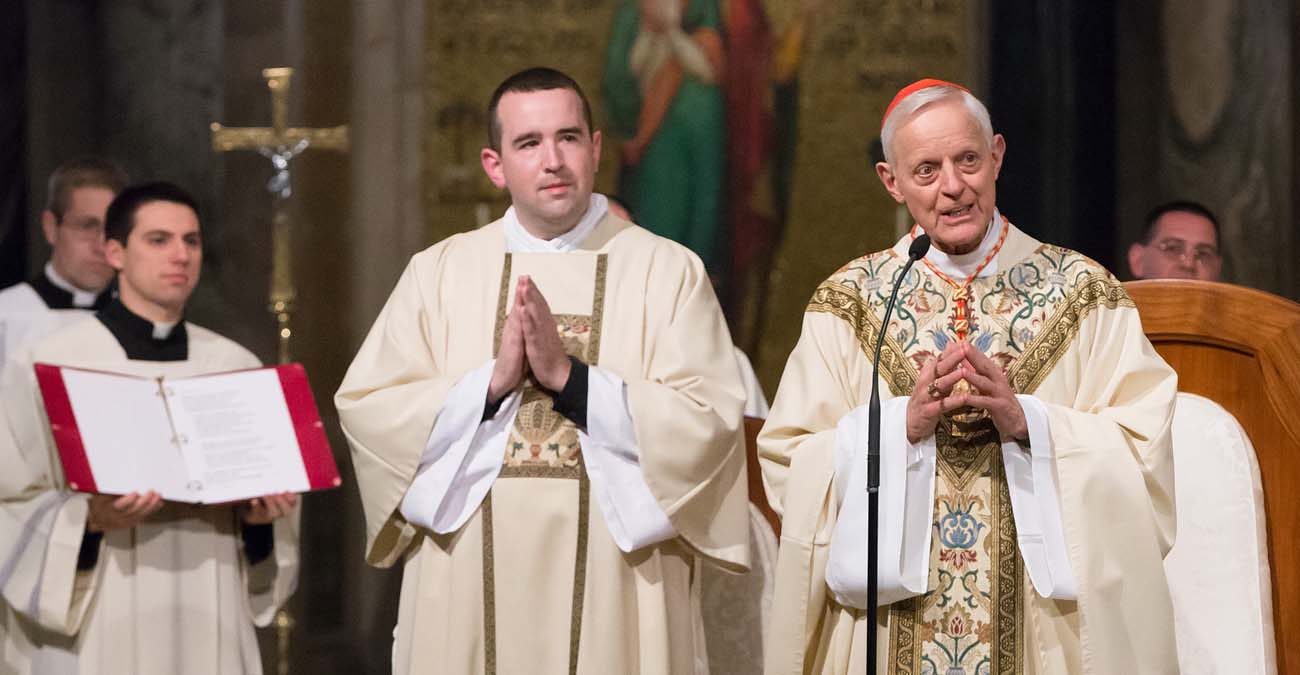 Cardinal Donald W. Wuerl of Washington, right, celebrates Mass April 6 to close a symposium marking the 50th anniversary of Blessed Paul VI's encyclical "Humanae Vitae." The Mass was celebrated in the Crypt Church at the Basilica of the National Shrine of the Immaculate Conception in Washington. (CNS photo/Rui Barros, courtesy The Catholic University of America)

WASHINGTON (CNS) — Surrounding the 1968 release of “Humanae Vitae” (“Of Human Life”) was the cultural context of the sexual revolution and a widespread fear about overpopulation following World War II, said Donald Critchlow, a professor of history at Arizona State University.

At the time, there were movements in support of eugenics, abortion rights, and sterilizations in an attempt to curb population growth, Critchlow told an audience at The Catholic University of America April 5.

Those who thought voluntary family planning was not enough proposed other, more coercive ideas, such as requiring couples to get a license to have a child or requiring sterilization for couples with more than five children, he added.

Critchlow was one of several speakers at a 50th anniversary symposium on Blessed Paul VI’s encyclical “Humanae Vitae” April 4-6 hosted by Catholic University. Keynotes and a number of workshop sessions examined the teaching and legacy of the document on the regulation of birth issued July 25, 1968.

The symposium was titled “Embracing God’s Vision for Marriage, Love and Life,” and brought together experts on a variety of topics related to the encyclical’s teachings on human sexuality and family life.

In a session exploring the historical context of the times when the encyclical was released, Critchlow noted that prior to the drafting of “Humanae Vitae,” a commission was appointed to give suggestions for the Catholic Church’s response to new forms of contraception.

The majority of the people on the commission recommended that the use of the birth control pill should be accepted and church teaching on the subject should be changed.

Blessed Paul rejected the commission’s report and in “Humanae Vitae” affirmed the church’s teaching on the sanctity of human life and its opposition to artificial contraception. In the document, the pope warned of the harm that widespread use of contraception would cause in society, such as lowering of moral standards, marital infidelity, less respect for women, and the government’s ability to use different methods to regulate life and death.

Critchlow said many priests and laypeople, particularly in the United States, dissented from this teaching. Students and faculty went on strike at The Catholic University of America after the board of trustees denied the tenure of a professor, Father Charles E. Curran, who publicly disagreed with the encyclical’s teaching. Cardinal Patrick O’Boyle disciplined 39 priests in the Archdiocese of Washington for their dissent from the document. Thousands of scientists wrote a petition published in The New York Times that criticized the encyclical.

In his homily for the symposium’s closing Mass at the Basilica of the National Shrine of the Immaculate Conception April 6, Cardinal Donald W. Wuerl of Washington recalled that he had been given his first assignment as a priest just a year before the encyclical’s release.

“It was immediately met with widespread dissent and vocal opposition,” he said. “I was surprised to see such vehement rejection.”

Cardinal Wuerl also recalled the quick action on the part of what was then the National Conference of Catholic Bishops in writing a pastoral letter to support and explain the encyclical after it had been issued. The NCCB had as its president then-Pittsburgh Bishop John J. Wright, for whom the future Cardinal Wuerl was serving as priest-secretary.

During that time, Cardinal Wuerl said he learned about the importance of the teaching role of the pope as the successor of Peter.

“We accept and follow the teaching of the Roman pontiff because it is true,” said Cardinal Wuerl. “We know it is true because of the authority with which he teaches it.”

While historians note that “Humanae Vitae” “constitutes a high-water mark in silent lack of reception on the part of the faithful,” Cardinal Wuerl said, “we take confidence in the reminder that a lack of reception of the teaching does not negate its truth.”

Indeed, throughout the anniversary symposium, people continually praised the prophetic message of the document, which still “stands as a profound and affirmative” defense of traditional values and family life, said Critchlow.

“In the end, what ‘Humanae Vitae’ proved was to be prophetic in its warnings of the breakdown of family and the depersonalization of sexual acts we see today in America,” Critchlow added.

Noting Pope Francis’s call to be in touch with realities people are facing in their daily lives, Mary Eberstadt, an author and speaker on issues of American culture, spoke about how the sexual revolution and the teachings of “Humanae Vitae” fit into that reality.

“The promise for sex on demand without restraint may be the biggest temptation humanity has been faced with,” she said.

In the face of that temptation, the teachings of “Humanae Vitae” are difficult, “but to confuse hard (teachings) with wrong is an elementary error,” said Eberstadt.

“If we are truly to lean into reality as Pope Francis has asked us to do … there is only one conclusion … the most globally reviled and widely misunderstood document … is also the most explanatory and prophetic of our era,” she added.

While many proponents of contraception support it as a way to reduce the number of abortions, Eberstadt said it is now “clear beyond a reasonable doubt that contraception also led to an increase in abortion,” as rates of out-of-wedlock births exploded at the same time that people were increasingly using modern contraceptive methods.

When the availability of abortion made the birth of a child “a physical choice of the mother,” it also made fatherhood a social choice for the father, who no longer felt equally responsible for the out-of-wedlock birth, said Eberstadt.

Many women believe contraception will make them happier and freer than they were before, Eberstadt said, noting that to the contrary, studies have shown that female happiness has declined.

As an example of how the sexual revolution and widespread use of contraception benefited men more than women, Eberstadt pointed to the recent “Me Too” movement where women have been sharing stories of sexual harassment in the workplace. These stories show how “widespread contraception licensed predation,” she said.

Margaret McCarthy, an assistant professor of theological anthropology at the Pontifical Pope John Paul II Institute for Studies on Marriage and the Family, spoke about another contemporary challenge that resulted from the sexual revolution: “the un-gendering of gender.”

Today’s view of gender as a social construct without any natural difference has resulted in the “forced separation of inseparable things,” such as a woman from her child, the man from the woman, and the child from the parents, said McCarthy.

In this worldview, relationships with others are seen as constraining arrangements that “we didn’t’ sign up for,” she noted. Through artificial reproductive technology, these relationships are then brought back into the picture on different terms, as choices within an individual’s control rather than a natural occurrence, she added.

With these realities in mind, Eberstadt noted that the consistency in the teaching of “Humanae Vitae” continues to draw in “people who seek the truth and can find it nowhere else.”

Marking the end of the conference, Cardinal Wuerl recognized that a large part of the anniversary celebration for “Humanae Vitae” is “a call to the continued accompaniment of those to whom we go out, announce, engage and walk with as we try to help them grasp and appropriate the teaching of this encyclical.”

“We, evangelizing disciples of the Lord Jesus, bring so much to the appreciation of the value of life and the integrity of its transmission,” said Cardinal Wuerl.