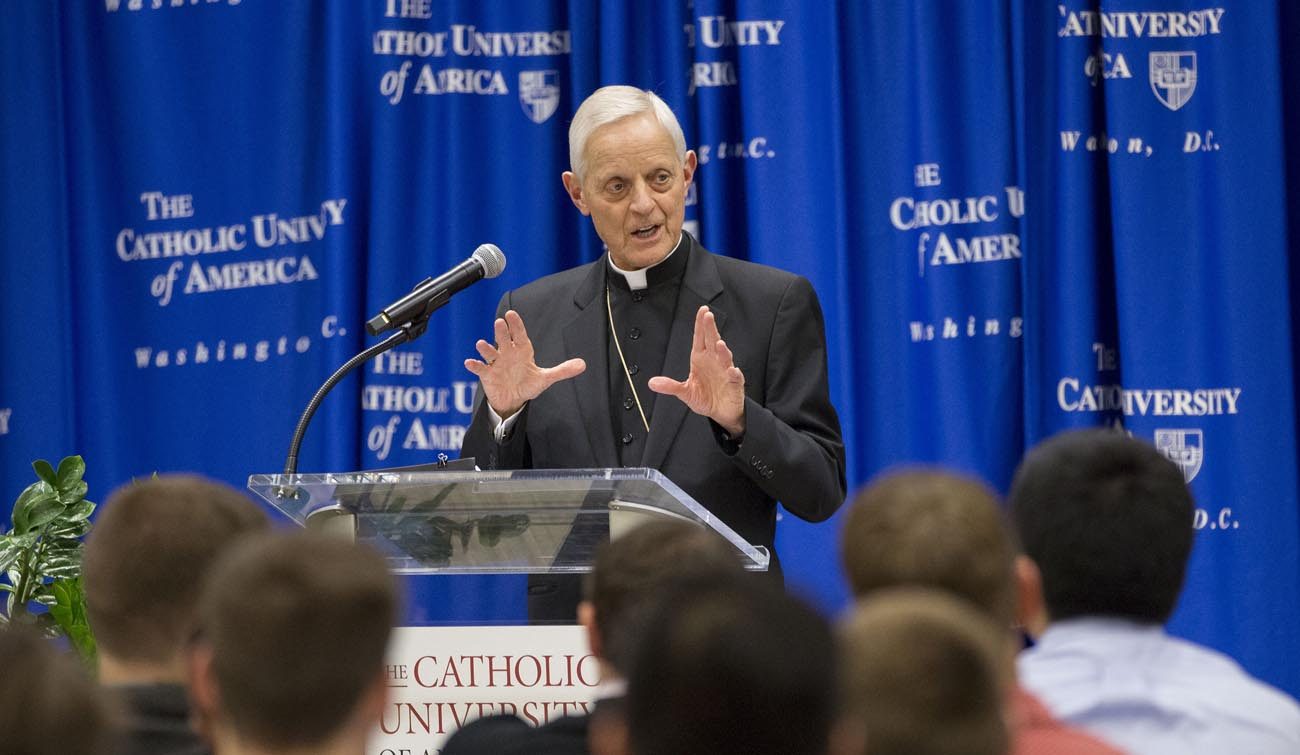 WASHINGTON (CNS) — With faith, people can confront and help overcome the evil of racism, Washington Cardinal Donald W. Wuerl said in an April 17 talk at The Catholic University of America.

“The elimination of racism may seem too great a task for any one of us or even for the whole church,” he said. “Yet we place our confidence in the Lord, because in Christ, we are brothers and sisters, one to the other. With Christ, we stand in the spirit of justice, peace and love.”

Cardinal Wuerl, who as the archbishop of Washington is Catholic University’s chancellor, was invited by its president, John Garvey, to speak on his recent pastoral letter, “The Challenge of Racism Today.”

Speaking at the university’s Pryzbyla Center to an audience consisting mostly of seminarians and other students, the cardinal compared racism to a residue that has contaminated streams that flow into the societal well from which people drink. He warned that the unhealthy contaminants causing racism in our culture can be subtle and ubiquitous.

“We have the possibility to be that fresh stream of water flowing into the societal well,” he said.

Noting that the U.S. bishops in their 1979 pastoral letter “Brothers and Sisters to Us,” identified racism as a sin, the cardinal said that evil has spanned continents and centuries and continues in today’s world.

“In societies around the world, the social construct of race has been used to classify ‘us’ and ‘them,’ separating those who are seen as ‘different’ — those who come from a different place or look differently or speak a different language,” Cardinal Wuerl said. “This construct has then led to the assertion of innate superiority of one group over the other. This has real destructive effects in society and in the lives of individuals and families.”

He said the concept of race is not a biological reality, but a social construct.

“Properly understood, there are not multiple races, but objectively there is only one race — the human race,” he explained. “We are all one species, one people, one human family, albeit manifested in diverse ethnic, cultural and societal ways.”

He added, “We are, all of us, brothers and sisters, children of the same God.”

Quoting from his pastoral letter on racism, Cardinal Wuerl said, “Today we need to acknowledge past sins of racism and, in a spirit of reconciliation, move toward a church and society where the wounds of racism are healed.”

Noting that African-Americans because of their skin color have borne “the social scars of denigration and a cultural classification rooted, fostered and experienced in slavery in this nation and the denial of their fundamental human dignity,” he said the societal impacts of racism endure today.

“The context in which our response to racism takes place,” the cardinal said, “must also include a recognition of the lingering effects of slavery and segregation and of the many social inequities that exist, including the disparate negative impact that certain policies have had, including the concentration of people by race in residential neighborhoods, de facto segregation in public schools, with many African-American children being consigned to poor quality schools, the inequities manifested in employment opportunities, health care and incarceration rates.”

In his pastoral letter, Cardinal Wuerl emphasized the importance of church efforts to foster social justice, opportunity and hope in facing those problems.

Speaking in the month that marked the 50th anniversary of the assassination of the Rev. Martin Luther King Jr., Cardinal Wuerl praised him as being first and foremost “a man of faith.”

“His Christian faith is what animated his life and kept him going day after day,” the cardinal said. “Always faithful to the Lord and his Gospel, he also insistently, forcefully, yet without violence, reminded this nation that we are all brothers and sisters, because we are all children of the same God.”

Cardinal Wuerl also praised Cardinal Patrick O’Boyle, the first resident archbishop of Washington in 1948. Immediately he began working to integrate the archdiocese’s schools, six years before the Supreme Court’s landmark Brown v. Board of Education decision that outlawed segregation in public schools. Then-Archbishop O’Boyle also gave the invocation at the beginning of the 1963 March on Washington, which featured Rev. King’s immortal “I Have a Dream” speech.

In February, Cardinal Wuerl blessed commemorative bronze plaques honoring unknown enslaved men, women and children buried throughout the Archdiocese of Washington. The plaques will be installed this spring in the archdiocese’s five cemeteries, to prayerfully remember those enslaved people buried in unmarked graves.

As he concluded his talk, the cardinal said, “My brothers and sisters, it is possible that we can build a new city, a new heaven and earth, a new community. … We’re capable of a much better world. Each one of us can renew the face of the earth.”

Afterward Julian Ehiem, a seminarian for Washington who is studying at Theological College, said the topic is very timely.

“We’re all one big family. From the theological point of view, we’re all God’s children, and that’s the first thing we should look at,” he told the Catholic Standard, Washington’s archdiocesan newspaper.

Ehiem, who was born and grew up in Nigeria before immigrating to the United States when he was in high school, said he appreciated how Cardinal Wuerl pointed out that Rev. King’s work for civil rights and racial justice was rooted in his Christian faith.

“He’s a very prophetic figure… (and) a great example of standing up for what you believe in,” the seminarian said, adding that Rev. King’s faith “was essential to who he was and his message.”

“It’s an individual choice, for clergy and laypeople, to take a stand against what is morally and objectively wrong in our society,” he said. “By all of us consciously taking that stand, that’s how change occurs.”

NEXT: All Catholics have duty to ‘walk with’ their neighbors, bishop says