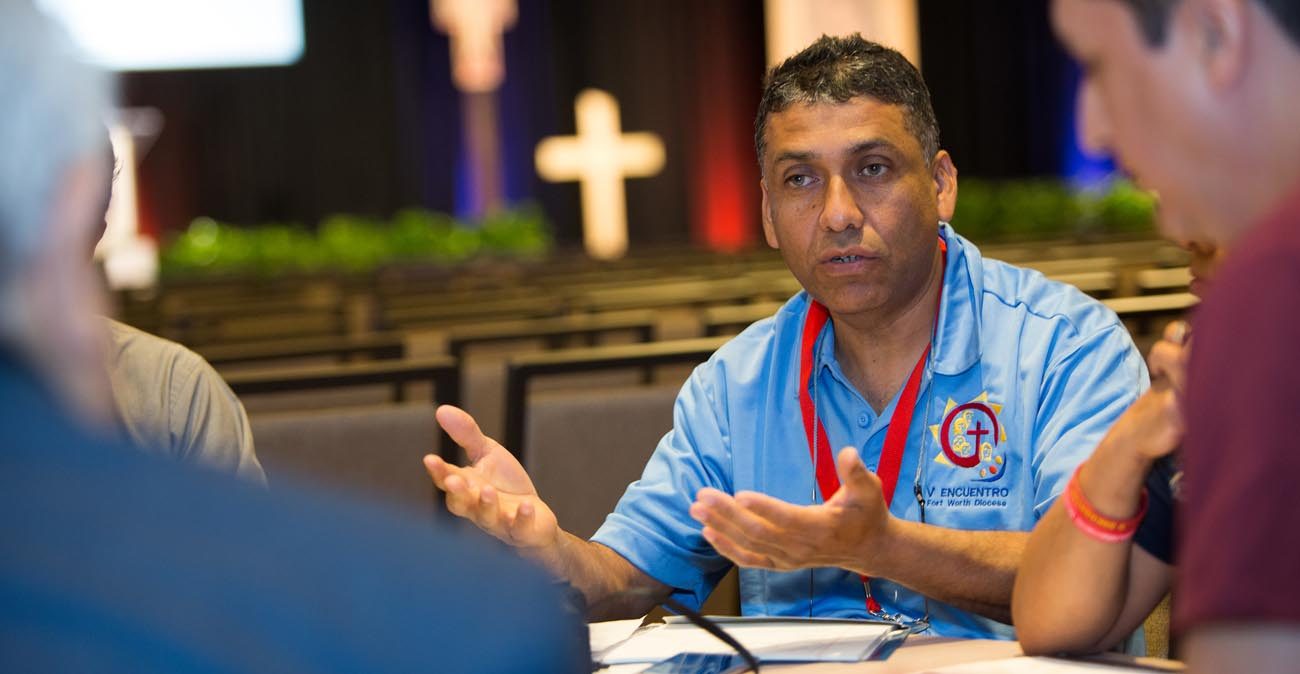 UPDATED – SAN ANTONIO (CNS) — Answer the call to missionary discipleship by addressing the needs of your church. Meet young people where they are and just listen. Improve catechetical resources and prepare future leaders.

These were some of the strategies discussed by more than 800 delegates representing 18 Catholic dioceses in Texas, Oklahoma and Arkansas, as they participated in a bilingual three-day Region X encuentro in San Antonio April 13-15.

Regional meetings are the latest phase of preparations for the U.S. Catholic Church’s Fifth National Encuentro, or “V Encuentro,” to be held Sept. 20-23 in Grapevine, Texas. Previous national encuentros were held in 1972, 1977, 1985 and 2000.

Encuentro is a multiyear process to discern the needs, aspirations, and faith practices of the 29.7 million Hispanic and Latino Catholics in the United States. First came parish-level encuentros, then the diocesan gatherings and now the regional encuentros are taking place.

The process for the upcoming national encuentro — inspired by Pope Francis’ 2013 apostolic exhortation, “Evangelii Gaudium” (“The Joy of the Gospel”) — began in 2014.

“What is the Holy Spirit calling us to at this moment as a region?” asked Ken Johnson-Mondragon, the Fifth National Encuentro’s research coordinator, as he presented to delegates in San Antonio a regional working document based on diocesan findings. He added that the conversations among participants while using the document as a discernment tool were most important.

The delegates worked in about 80 small groups to talk about challenges, opportunities and successful practices in areas like evangelization and mission, faith formation and catechesis, youth, family ministry, immigration and theology. Their recommendations will be presented before the national encuentro in Grapevine.

According to the working document, Hispanic Catholics make up 6 million of the estimated 8.4 million Catholics living in the U.S. church’s episcopal Region X. Some dioceses in the region, like Beaumont and Fort Worth, Texas, Oklahoma City and Tulsa, Oklahoma, and Little Rock, Arkansas, have seen their Hispanic population increase more than 100 percent between 2006 and 2016.

“We have seen the growth of the Hispanic community in our region and we are seeing our needs within the church,” said Francisco Lariz of Fort Worth, who came to the Region X encuentro with 40 members of his diocese. “We hope that with our contribution we can all find the best ways to fulfill the needs of the future generations and of those who are here now.”

The encuentro weekend was full of honest and fruitful dialogue in both Spanish and English, bilingual presentations, and time for prayer and song. Over 20 bishops from the region accompanied the delegates throughout the weekend, with many choosing to participate in the small working groups’ conversations.

During the discussions, delegates representing different ministries and cultures, shared some of the early fruits of “V Encuentro,” which included increased participation, more resources for Hispanic ministry and a renewed openness to encountering Jesus in those most vulnerable.

“Parishioners are going beyond their comfort zones and take time to hear those in need,” said Lily Morales, Hispanic ministry coordinator for the Dioceses of Austin, Texas. She described how touched people have been by the process of going out and encountering people in the peripheries during their parishes’ encuentros.

A parishioner in Morales’ encuentro group approached a blind woman and just listened to her — as the process encourages. The parishioner discovered that the woman was struggling financially and did a raffle fundraiser with her church, Morales said. “She also invited her to the sessions. That person was so grateful that the church reached out to her.”

Martha Pena, who has been a catechist for over 20 years and now does prison ministry in Little Rock, Arkansas, shared the encuentro program with the inmates of three prisons during her weekly visits. She also encouraged parishioners of St. Edward Church to reach out to those in prison.

“It is urgent that the Catholic Church reaches out to them,” she said. “We cannot forget about them.”

“We had made a decision that the culture of encuentro will be part of the (archdiocesan) pastoral plan, so we are going to be embracing more and more parishes until our parishes are attached by the ‘Joy of the Gospel ‘that is the heart of the whole of ‘V Encuentro,'” he said.

Listening and sharing experiences during the Region X encuentro gave delegates ideas on how to get more involved and serve their community.

“My mentality has changed,” said Silvia Hernandez-Martinez, a parishioner of St. Anthony in Columbus, Texas, a parish in the Dioceses of Victoria that is starting a Mass in Spanish as a result of “V Encuentro.”

Before, she said, she would only see the church’s need to share information in small towns like hers, but now she wants to inform others about church’s resources. “This encuentro motivates me to be a bridge, to let the diocese know about our needs.”

Organizers explained that the multiyear “V Encuentro” process seeks to activate at least 20,000 new Hispanic Catholic leaders nationwide. People such as Marco Elizaldi, who traveled 12 hours to San Antonio with his Tulsa delegation.

Elizaldi joined the church 10 years ago, and said he found out about the encuentro process when signing his son up to receive his first Communion. Elizaldi, who is a lector and is looking into becoming a deacon, said he was inspired by delegates’ discussions on leadership development and the different ministries Hispanic Catholics are joining

“I saw willingness to follow the steps of Jesus Christ,” he told CNS. “Good things happen when you are able to become that tool to help others.”

Jackie Flores, a youth minister at St. Thomas More in Tulsa, added that the “V Encuentro” process encouraged her to evangelize in her community and family. “The ‘V Encuentro’ helped us to see that we don’t only need to help ourselves but we need to help others,” she said.

Another priority of “V Encuentro” is to reach out to U.S.-born Latinos, said Julio Beltran, coordinator for the Pastoral Juvenil (Hispanic Youth and Youth Ministry) in the Diocese of Beaumont and chair of the Region 10 Team.

Citing a study that says that 60 percent of Catholics under age 18 are Hispanic, Beltran told delegates, “We need to offer spaces where bicultural and bilingual youth can use their gifts and take leadership roles.”

Beltran himself found a second home through youth ministry at his parish when he was a teenager. This encouraged him to serve the Catholic Church through in Pastoral Juvenil, which is what he did as soon as he received his Deferred Action for Childhood Arrivals, or DACA, status and was able to work for the Beaumont Diocese.

There is not “one way” to reach out to the second- or third-generation Hispanic Catholics, Beltran said, but we can empower them from their reality. “We cannot have a culture of ‘English only,’ ‘Spanish-only’ or ‘We have always done it this way,'” he added.

Parishes and dioceses must try to provide a sense of community along with catechetical and leadership formation for both first and second generation Hispanic Catholics. Beltran echoed the comments of youth ministers at the regional in San Antonio by saying that young people yearn for authentic concern for their well-being and their future and someone willing to accept them as they are and accompany them in their journey.

“Young Latinos are the present and the future of this country,” Beltran said. “We should not want to evangelize our youth because of fear of having an empty church tomorrow, we should do it because it’s our baptismal responsibility.”

The three-day Region X encuentro concluded with the celebration of the Mass, with Archbishop Garcia-Siller as the main celebrant, and a reminder of the baptismal call to be missionary disciples.

“Pope Francis has insisted that to be missionaries does not happen at the end,” said Archbishop Garcia-Siller. “As you are becoming a disciple, you are missionary.”