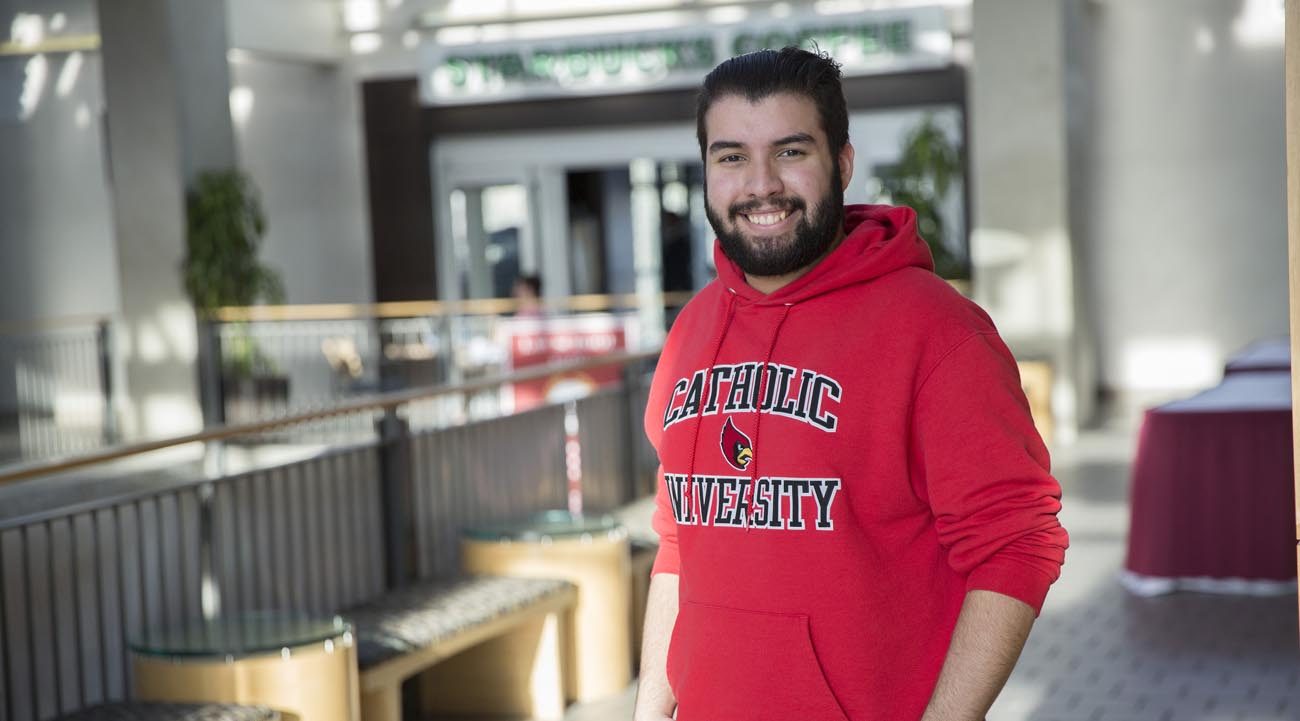 Gabriel Agosto, who had just begun his freshman year at the University of Puerto Rico when Hurricane Maria struck, poses for a Feb. 1 photo at The Catholic University of America in Washington. The university said in November that it would take up to 40 students who were enrolled in colleges or universities in Puerto Rico as visiting students for the spring 2018 semester, and would waive their tuition and standard student fees. Agosto is one of seven who accepted the offer. (CNS photo/Jaclyn Lippelmann, The Catholic Standard)

WASHINGTON (CNS) — Puerto Rican students who are studying at The Catholic University of America in Washington for the spring semester said that this opportunity not only gives them a reprieve from the damage caused by Hurricane Maria, but allows them to pursue their dreams.

Many students found themselves with nowhere to study after Maria — the most powerful hurricane to hit Puerto Rico in nearly 90 years — slammed into the island in September, killing dozens and decimating local infrastructure. More than six months later, thousands of Puerto Rico’s 3.3 million residents remain without power.

The Catholic University of America in Washington said in November that it would take up to 40 students who were enrolled in colleges or universities in Puerto Rico as visiting students for the spring 2018 semester, and would waive their tuition and standard student fees.

The main goal is to allow the students to stay on the path to graduation, because “if they lost an entire academic year, it can be really hard to get back into the academic groove,” said Chris Lydon, vice president for enrollment management and marketing at The Catholic University of America.

Among the seven students who have taken up the offer is Desiree Cordero Rios, who had just begun her freshman year at the University of Puerto Rico at Aguadilla, in the city of Aguadilla, when the storm hit.

She was with her family at their home in the countryside, where her father works as a farmer. The family had put up barriers inside their home and took turns peeking through a small opening at a window to see what was happening to their neighborhood. Water was flooding into the house.

“It was desperate,” Cordero Rios told the Catholic Standard, newspaper of the Washington Archdiocese. She said she remembers waking at 6 the morning after the storm and trying to call her boyfriend, only to find that there was no phone signal.

The vegetables and plantains on her father’s farm were ruined, and many of the chickens and rabbits had died.

“We were shocked,” she said, noting that “we knew it was going to be hard, but not that hard.” 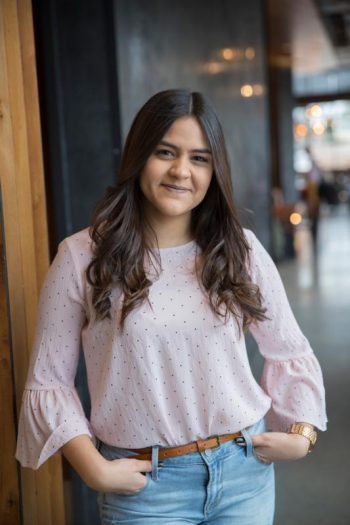 Desiree Cordero Rios, who had just begun her freshman year at a university in Puerto Rico when Hurricane Maria struck, poses for a Feb. 1 photo at The Catholic University of America in Washington. (CNS photo/Jaclyn Lippelmann, The Catholic Standard)

When Cordero Rios went outside for the first time after the storm, there were no trees, and she could see houses that she had not seen before. There was no electricity or running water, but her father had stored water, and there was a generator that they were able to use.

Gas for generators was in such high demand that Cordero Rios and her family woke at 4 a.m. every day to be at the gas station by 5 a.m. They would wait in line for eight hours to buy the $30 worth of gas that they were allowed.

The family, including aunts, uncles and cousins, would gather together every night in each other’s homes in the neighborhood.

It was unclear if and when the university would reopen, and Cordero Rios said she began to think, “What about my future if they don’t open?”

When telecommunications resumed, she called an aunt who lives in Maryland and went to stay with her. She had thought about someday moving to the United States mainland, and this hurricane pushed her to make that dream a reality, she said.

Cordero Rios is living in a residence hall on the campus of The Catholic University of America, where she is studying marketing. She loves looking at the paintings in the domes when she goes to Mass in the Basilica of the National Shrine of the Immaculate Conception, she said.

Cordero Rios aims to transfer to The Catholic University of America for the rest of her college career.

“The education here is awesome,” she said, noting that living in Washington is making her more independent and improving her grasp of the English language. She hopes to start her own digital marketing company after graduation.

Like Cordero Rios, Gabriel Agosto also was starting his freshman year at the University of Puerto Rico when Hurricane Maria hit the island.

He was at the university’s campus in Bayamon municipality. His mother was working as a hotel wedding coordinator and after the storm she was transferred to Washington, where Agosto was accepted to attend The Catholic University of America for the spring semester.

This is a particularly exciting opportunity for Agosto, because it allows him to study what he is really interested in — drama. He was studying marketing in Puerto Rico, because there aren’t many drama programs there, but his dream is to become an actor.

“I am really grateful that I got the opportunity to come here and study,” he said.

In his senior year of high school, Agosto and others in his drama class entered a movie into a competition where it was voted “gem of the festival” and won other awards.

That award-winning night “cemented in my mind that I was capable of doing anything,” he said.

To pursue his dream, Agosto wants to keep studying at The Catholic University of America, and he said he could see himself graduating from the school.

The university’s Spanish Club invited him and other Puerto Rican students to a meeting, which gave him a taste of the culture from back home.

“Puerto Rico is home, it will always be home,” said Agosto.

PREVIOUS: NCAA championship is a win-win for Catholic universities