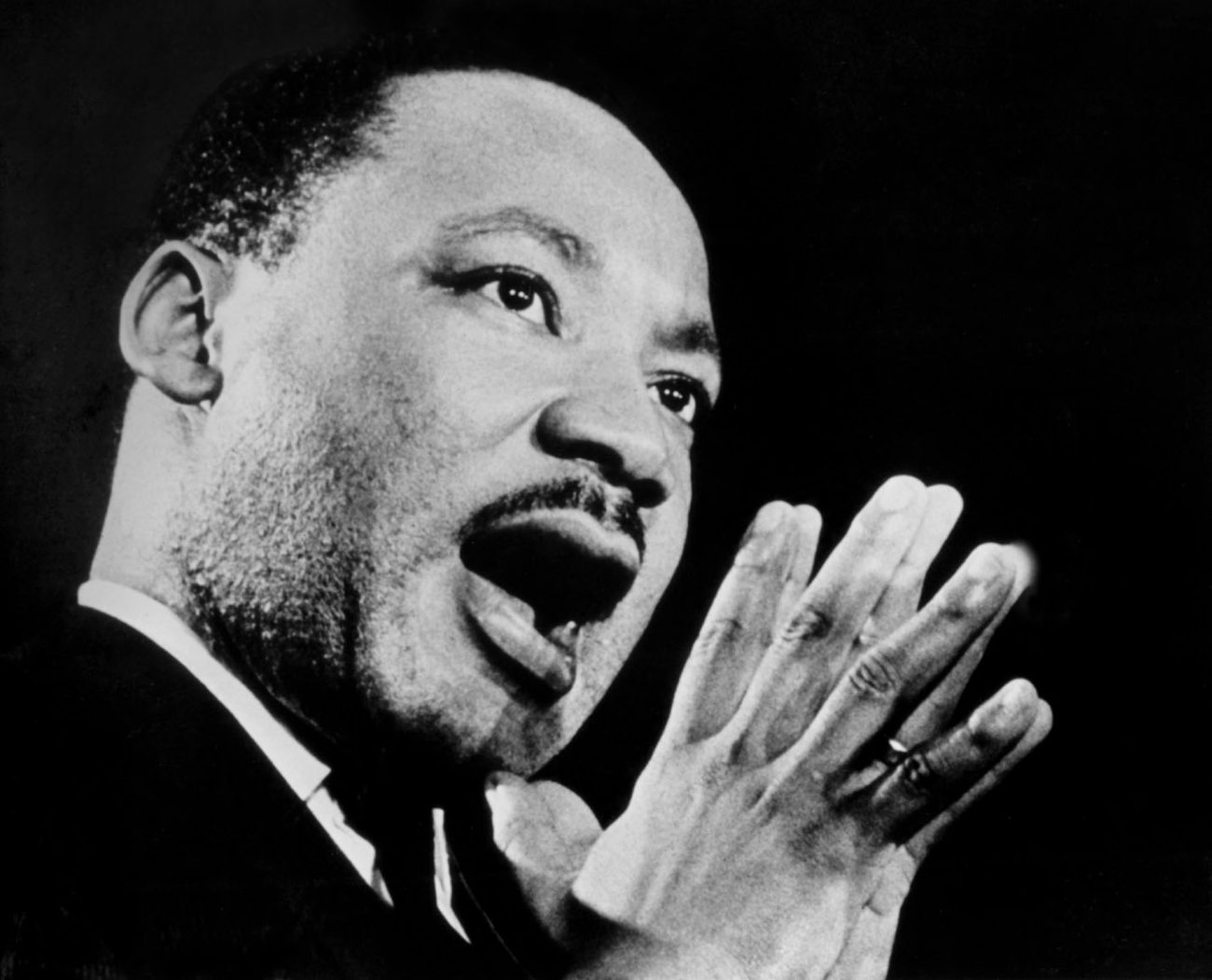 NASHVILLE, Tenn. (CNS) — Father Pat Connor was on his way from a graduate class at the University of Memphis to St. Joseph Hospital to visit a priest friend the evening of April 4, 1968.

That’s when he heard the news crackle over his car radio speakers: the Rev. Martin Luther King Jr. had been critically injured by a gunshot wound and was being rushed to St. Joseph.

Realizing he wouldn’t be able to get near the hospital under those circumstances, Father Connor headed home to his residence at Immaculate Conception Church on Central Avenue, just a few miles from the Lorraine Motel, where Rev. King was shot.

After local news outlets later announced Rev. King’s death, an eerie silence followed. “Real news was hard to get at the time,” recalled Father Connor, now a retired priest of the Diocese of Nashville, which at the time encompassed all of Tennessee.

Armed National Guardsmen rolled up and down Central Avenue, the only vehicles moving through the streets, determined to quell any potential rioting. Smoke and flames erupted in the distance.

The assassination of Rev. King evoked a visceral reaction in communities across the country, as grief, anger and racial tensions rose to a volatile level.

The civil rights leader went to Memphis to stand with the striking sanitation workers, and his presence among them was “like Jesus coming into my life” recalled Clinton Burrows in the documentary “At the River I Stand,” which chronicles the strike and Rev. King’s involvement in the movement, leading up to his assassination. When Rev. King was killed, it represented nothing less than the slaying of a prophet.

Half a century after his death, many of the issues he tackled are still part of our national dialogue.

“Fifty years ago it was about overturning laws and policies that really concretely divided us,” said Christ the King parishioner Megan Black, who holds a master of divinity degree from Vanderbilt University.

“Now, we’ve changed the laws but we still have the structures that are designed to keep people of color sick, uneducated and incarcerated,” she told the Tennessee Register, Nashville’s diocesan newspaper. “The consequences are very much felt and lived in the black community. There’s still work to be done.”

The long march toward equality, toward the mountaintop, and the promised land that Rev. King spoke of the day before he died, continues.

In the days following Rev. King’s death, Father Connor and fellow members of the Nashville diocesan priests’ council met in Memphis with city government representatives and then with members of the sanitation workers’ union, which the mayor of Memphis did not recognize at the time. They decided to issue a statement backing the workers, reinforcing “that they had a right to march and be on strike,” Father Connor said.

They agreed when Rev. King told the workers in Memphis that “all labor has dignity,” and “it’s a crime for people to live in this rich nation and receive starvation wages.”

The priests’ council also recommended to Nashville Bishop Joseph A. Durick that the diocese make a $1,000 donation to support the striking workers’ families, almost all of whom were African-Americans living below the poverty line.

“We began to get some pretty nasty calls at the rectory” after that news came out, Father Connor said. “Some people had a really bad reaction to that.”

That brought into sharp focus for Father Connor just how bitterly divided the people of the diocese were on confronting racial justice.

He remembers how white parishioners who were staunchly opposed to integration openly challenged Bishop Durick’s support for Rev. King and the sanitation workers’ strike, his stance on civil rights, even his authority as bishop. “It definitely took a toll on him, but it didn’t stop him,” Father Connor said.

When Bishop Durick was named coadjutor bishop of Nashville in 1964, he began the arduous task of convincing white Catholics that it was high time for African-Americans to move beyond the second-class place they had been relegated to for so long.

“Bishop Durick was quite progressive for the era,” said Reavis Mitchell, dean of the School of Humanities and Behavioral Social Sciences at Fisk University and a lifelong parishioner at St. Vincent de Paul Church in Nashville.

Mitchell wrote his graduate thesis on “The involvement of the Catholic Church with the black community in Nashville, 1954-1970,” and personally interviewed Bishop Durick on several occasions.

Even though Bishop Durick and his “kitchen cabinet” of allies were at the forefront of the civil rights movement in Tennessee, their message did not always filter down to the white Catholics in the pews or reach the historically black parishes.

Members of the black Catholic community were often left wondering, “Are there any … priests of white congregations openly challenging segregation? Encouraging their congregations to take action to end segregation? To be part of the civil rights movement?” Mitchell said. “If they were, they were keeping it secret from the black folks.”

One of Rev. King’s legacies is that “he held the church accountable for its complicity in racism,” said Black, of Christ the King Parish. “He reminded the church of what it stands for.”

A lifelong Catholic, Black is the national clergy organizer for PICO National Network. In her job, she has worked with organizers in the Black Lives Matter movement, and “absolutely” sees these modern-day advocates for racial justice as walking in the footsteps of Rev. King, holding both civil and clerical servants accountable.

The Catholic Church has a role to play in dismantling racism, Black said, noting the U.S. Conference of Catholic Bishops last August established the Ad Hoc Committee Against Racism, with Bishop George V. Murry of Youngstown, Ohio, as its chairman. The U.S. bishops also are expected to issue a new pastoral on racism. Their 1979 pastoral on the issue is now in its 19th printing.

She would like to see funding for comprehensive resources and a solid curriculum that can be used at the parish level.

Black recently organized a Lenten adult education series at Christ the King addressing race. “I sense there is a deep hunger for these types of conversations,” she said. “But it’s hard to find a way into it.”

Since the Catholic Church in U.S. has historically been majority white, “the church doesn’t fully experience the pain of this problem,” Black said.

With only eight black Catholic bishops currently active in the U.S. church, the bishops “largely represent the white Catholic experience,” she noted, and don’t collectively grasp the weight of racism. What’s needed is “profound spiritual leadership … to confront race in a radical way.”

The night before he was murdered, Rev. King delivered his famous “Mountaintop” speech at the Mason Temple, the Church of God in Christ in Memphis.

“I just want to do God’s will,” he told the enthusiastic crowd packed inside the church sanctuary. “And He’s allowed me to go up to the mountain. And I’ve looked over, and I’ve seen the Promised Land. I may not get there with you. But I want you to know tonight, that we, as a people, will get to the promised land.”

Before he died, Rev. King was in the final planning stages for a large-scale Poor People’s March on Washington; today, there is a new Poor People’s Campaign, built around a “national call for moral revival,” designed to “recapture what Dr. King called the ‘revolutionary spirit’ needed to solve these systemic problems” of racism and poverty.

The modern-day movement for civil rights, Black said, can “remake what it means to be religious: I’m a person who takes action, who is aligned with the poor and marginalized,” a person who is carrying on the unfinished work that was started so many decades ago.

NEXT: Resurrection can inspire hope, love in a divided world, cardinal says