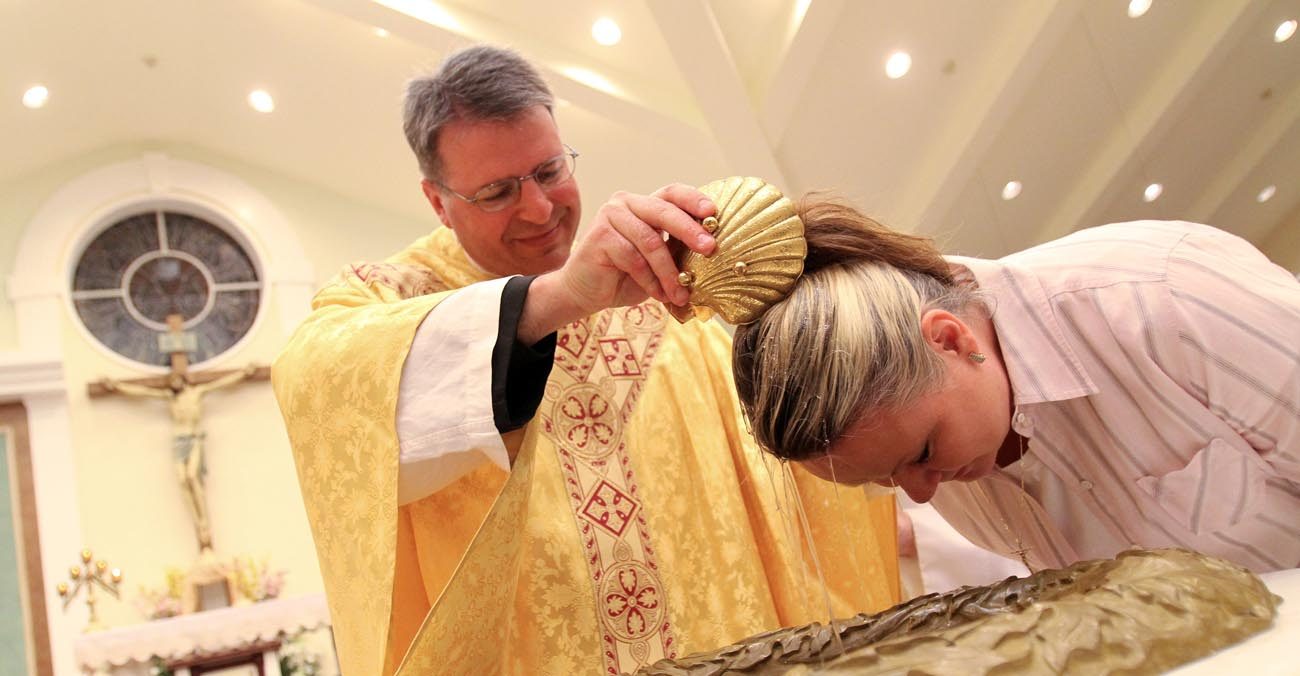 WASHINGTON (CNS) — By entering the Catholic Church, catechumens and candidates are joining the history of God’s plan to redeem the world from sin, Detroit Archbishop Allen H. Vigneron said as the Rite of Christian Initiation of Adults process began in February.

“It is by communion with Jesus Christ that God’s history becomes our history,” Archbishop Vigneron told the congregation in his homily Feb. 18 during the first milestone in RCIA — the Rite of Election.

The RCIA process, carried out in parishes and dioceses across the United States, cames full circle as the U.S. church welcomed thousands of new Catholics at Easter Vigil Masses March 31.

“As the culmination of the Easter Triduum, the vigil celebrates the passion, death and resurrection of Jesus,” said a news release from the U.S. Conference of Catholics Bishops in Washington.

“While people can become Catholic at any time of the year, the Easter Vigil is a particularly appropriate moment for adult catechumens to be baptized and for already-baptized Christians to be received into full communion with the Catholic Church,” it said.

About 85 of the nearly 200 dioceses across the nation reported their numbers of catechumens and candidates for full communion to the USCCB. Based on these numbers, more than 30,000 people were expected to be welcomed into the church.

Catechumens, who have never been baptized, received baptism, confirmation and first Communion at the Easter Vigil. Candidates, who have already been baptized in another Christian tradition, entered the church through a profession of faith, being confirmed and receiving the Eucharist.

The U.S. archdiocese with the largest Catholic population in the country — the Archdiocese of Los Angeles — welcomed 1,700 catechumens and 1,127 candidates.

Among them was catechumen Tina Robinson. Raised in a Baptist church, Robinson eventually started attending a nondenominational church. After she married a cradle Catholic, she prayed to God for guidance. A few days later on the front door of the couple’s house, she received an invitation to attend St. Bernard’s Church. “That was my calling,” Robinson said.

The Archdiocese of San Francisco welcomed 173 catechumens and 169 candidates. In the group was Tina Wok, who had been a nominal member of a non-Christian religion, and Kent Iglehart, whose wife Jacqueline inspired his conversion.

In the Archdiocese of Philadelphia, 490 adults were received into the Catholic Church at the Easter Vigil — 254 catechumens and 236 candidates.

In the Diocese of San Diego, a combined 1,091 catechumens and candidates were welcomed into the church. They include Karrie Johnson. After regular attendance in a Christian church for a number of years, Johnson felt that God might be guiding her toward the Catholic Church. Open to the possibility, she attended Mass for the first time and had the “profound feeling” that she was truly home.

Just as each person’s conversion story is unique, Archbishop Vigneron said in his February homily, the Rite of Election and the Easter Vigil are very much public acts in which one’s personal history is joined with the history and gifts of the Catholic Church.

A list of the numbers of catechumens and candidates that archdioceses and dioceses reported to the USCCB can be found here.

NEXT: Still seeking the mountaintop 50 years after Rev. King’s assassination