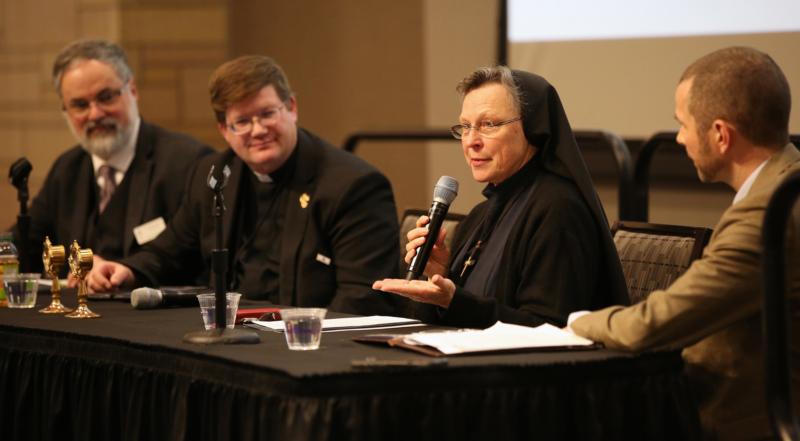 Sister Esther Mary Nickel, associate director of worship for the Diocese of Sioux City, Iowa, talks during a panel discussion March 22 at the University of St. Thomas in St. Paul, Minn. The panel was part of a conference on faith, agriculture and the environment. Others pictured are panel moderator Christopher Thompson of St. Paul Seminary School of Divinity, Father Gregory Mastey of the Diocese of St. Cloud, Minn., and the Rev. Brad Roth, a Mennonite pastor from Kansas. (CNS photo/Dave Hrbacek, The Catholic Spirit) See AGRICULTURE-NOBLE-VOCATION April 11, 2018.

ST. PAUL, Minn. (CNS) — The story was about a duck — a friendly duck that had been spending time in a man’s yard, and now the man was feeding it.

He had asked his pastor, Father Gregory Mastey, if he had time to listen to his story, and Father Mastey had said yes.

“After about 15 minutes of him telling me these stories about this duck that keeps showing up … then he turned to tears. And I said, ‘What else is happening, George?’ And he says, ‘I’m lonely after my wife passed. My life isn’t the same when I have neighbors so far away. I feel the pains of this.’ And that came out of a duck story.”

This is the reality of pastoral life in rural areas, said Father Mastey at a recent three-day conference in St. Paul on agriculture and vocation. Titled “A Noble Vocation: Integrating Faith, Food and the Environment,” the event was organized by St. Paul-based Catholic Rural Life.

A priest of the Diocese of St. Cloud, Father Mastey was one of three panelists speaking on “Faith, Food, and the Environment and the Task of the Pastoral Leader.”

Held in March at the University of St. Thomas in St. Paul, the conference’s other sessions focused on U.S. agriculture history, environmental challenges and climate change, and included international and indigenous perspectives.

The 110 participants from 18 states were drawn together through concerns about “what’s happening around agriculture and family farms, what’s happening in our rural communities and our rural life, concerns about food security and how we’re going to feed the world in the future, while caring at the same time for our environment,” Catholic Rural Life executive director James Ennis said.

“There are concerns about retrieving this sense of the nobility of agricultural production and the nobility of the farmer. How do we do that, and what does our faith tell us about that?”

About 60 of the conference’s participants were farmers or worked in agribusiness, Ennis said. Others were scientists, food experts, faith leaders and theologians.

In his keynote address, Archbishop Bernard A. Hebda of St. Paul and Minneapolis acknowledged the difficulties many farmers face, as well as the complexities of agricultural production and its environmental impact, but he said that challenges should be faced with hope. He encouraged deeper reflection on agriculture as a vocation.

“To refer to the vocation of an agricultural leader means someone who is called and then also listens,” he said. “The commitment to agriculture is a vocation given by God, a unique and privileged way of life. Indeed, of all the occupations undertaken by men and women, the task of ’tilling and keeping the earth’ reaches to the depths of our relationships with God the Creator, with creation and with all of humanity,” Archbishop Hebda said.

During the panel on pastoral life, Father Mastey said that as the duck-watcher intimated, rural life can be isolating. There used to be four farms on a square-mile of land, but by the 1990s, on average there was only one farm building in that same space, with no guarantee of it being occupied, he said. Because people are “busier and busier,” the social structure that once held rural life together has unraveled, and the economy makes it difficult for young people to take over family farms, even if they want to.

Ministering in rural areas should be rooted in building relationships that understand people’s connection to their land, Father Mastey said. During Minnesota’s warmer months, he holds a weekly Tuesday evening outdoor Mass at his parishioners’ homes, and he asks them to introduce themselves and their land — how they came to call it home — as well as their families. The liturgies bring people together, he said.

Father Mastey, who grew up on a farm, turns outdoor excursions into ministries and is known for offering a canoeing ministry, fishing ministry and hiking ministry. These retreats open the door to relationships, he said.

“The pastoral life is really about connecting the dots and relationship and realizing that God is in all these places,” he said.

Also on the panel were Sister Esther Mary Nickel, who does parish planning in the Diocese of Sioux City, Iowa, and the Rev. Brad Roth, a Mennonite pastor from Kansas and author of “God’s Country: Faith, Hope, and the Future of the Rural Church.”

Sister Nickel, a member of the Religious Sisters of Mercy of Alma, Michigan, has spent time listening to people in rural parishes at risk of closing, and has helped church leaders and parishioners change their perspective from criticism to hope, and from financial concerns to faith, she said.

Shifting demographics and parish merging and closings have “a dramatic effect on community and communion,” she said.

“Change can affect a vision, or, with the proper perspective of faith, it can be an occasion to bring a deeper and real communion among the faithful and their pastor. Most often, people just need to be heard,” Sister Nickel said.

“The task for pastors and parishes is not to create community but to reveal community,” she said.

The panel was moderated by Christopher Thompson, director of the Center for Theological Formation at St. Paul Seminary School of Divinity in St. Paul. He and Ennis drafted the document “Vocation of the Agricultural Leader: Integrating Faith with Agriculture and the Environment,” published in 2016 by Catholic Rural Life and the Vatican-based International Catholic Rural Association.

Ennis said that the importance of listening — including farmers’ listening with humility to the needs of the natural world, as well as listening to God’s will in hard times — was a recurrent theme at the conference.