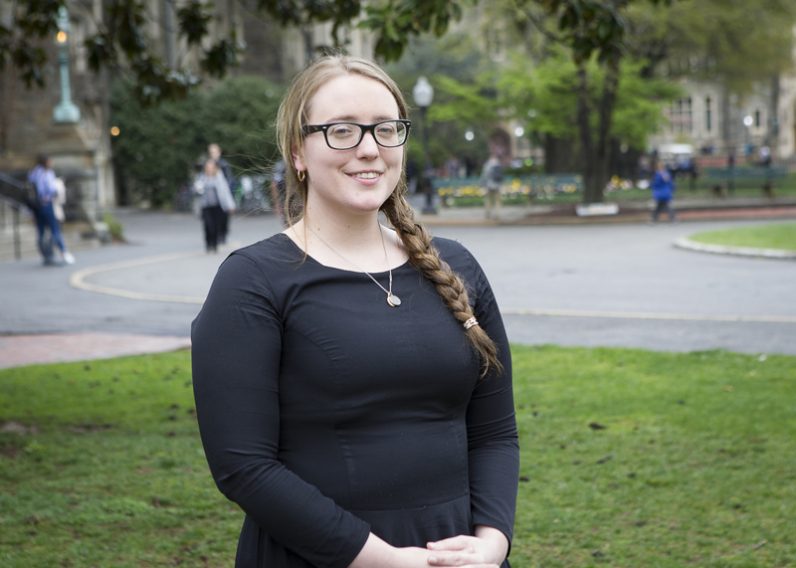 For Burhans, 28, a map represents more than a way to identify a geographic locale; each location on a map represents complex layers of data that can be used to respond to human needs and protect fragile ecosystems.

The Buffalo, N.Y. native envisions using her startup, which she named GoodLands, to work with church officials, hospitals, schools and development agencies to help them nurture life in all its forms.

Since presenting her idea at the Vatican in 2016 — including a meeting with Cardinal Peter Turkson, prefect of the Vatican Dicastery for Promoting Integral Human Development — Burhans has spent much of her waking life mapping and studying the challenges facing the church.

She told Catholic News Service that she approached the Vatican and was pleasantly surprised with church officials’ warm reception. At the time, she wanted to raise anew the important role that maps can play in the daily life of the church, which itself has a long history of cartography.

On her way to the meetings, she was led through an ornate hallway in the papal residence covered with meticulously painted maps dating to the 16th century. That’s when she felt her ideas would be welcomed.

During one of the meetings in the Vatican Secretariat of State, two priests, after conferring in Italian, told her what she was planning “would be useful for everything,” Burhans recalled.

Burhans uses cutting-edge geographic information system software — GIS — to plot data on maps, which can be used to help church leaders increase “spatial understanding” of its work, prepare for the future and respond to pressing issues such as rising sea levels, habitat destruction, drought, famine and homelessness.

“We’re really just focused on solutions for communities. And we want to be sure everyone feels they can be part of the conversation, part of the solution with our work,” Burhans said.

Those solutions depend on how the data is understood and Burhans has found that once people see the maps she has developed, they also begin to better understand how they can advance the vision of Pope Francis in his 2015 encyclical, “Laudato Si’, on Care for Our Common Home.”

The document helped boost Burhans’ dream for GoodLands, which she launched about the same time the encyclical was released and after she completed work on a master’s degree in ecological design from the Conway School in Western Massachusetts.

“It really captured everything that we’re doing … it captures the values of ecological design and faith,” she said of the encyclical.

“At many points, it jumped out how directly the pope is talking about land and about things that I could see geographically, about protecting critical habitats, about ocean conservation, about water quality, which is a huge part of land use planning, and habitat connectivity, food scarcity and economics and the pro-life element. He’s got it all in there.”

The idea of addressing land stewardship first rose in Burhans’ mind as she discerned a religious vocation after graduating in 2014 from Jesuit-run Canisius College in her hometown of Buffalo. She had returned to the Catholic Church in college, years after her family left the church. Discovering Ignatian spirituality with the help of a spiritual director helped her along her path.

During her discernment — which continues — Burhans visited a religious congregation, which she declined to name. There, she saw serious erosion and unsustainable land use and began thinking there had to be a way to help religious communities protect habitats. She decided to explore how to do that in graduate school.

At Conway, Burhans discovered GIS software and could see its value in her desire to help the church steward its property holdings.

“It was as though someone had put my brain into a software program perfectly and all I had needed to do was learn how to speak to it,” she said.

“She pulled the idea out of me,” Burhans recalled of Conway. “She might have seen something in me that I definitely didn’t see … she gave me the courage.”

Her idea also caught the attention of Jack Dangermond, president of Environmental Systems Research Institute in Redlands, California, whose sophisticated GIS software is in widespread use. Dangermond invited Burhans to work with the company’s developers and she spent more than four months in California in 2016 mapping the global Catholic Church.

Burhans has surrounded herself with a team of advisers, including Dana Tomlin, an early developer of GIS technology and founder of the University of Pennsylvania’s Cartographic Modeling Lab, and Rosanne Haggerty, an affordable housing advocate who is president of Community Solutions in New York City.

Haggerty formerly was coordinator for housing development at Catholic Charities in the Diocese of Brooklyn, New York, and helped repurpose empty convents and schools into affordable housing. She invited Burhans to live and work for free in her Hartford, Connecticut, home and helped Burhans get the important meeting at the Vatican through two bishops she knew.

Burhans has developed a comprehensive five-year strategic plan for her company, which she envisions operating as a hybrid business with for-profit and nonprofit entities. She is in the process of adding staff to take the load from her full schedule so she can raise investment capital.

Only recently did Burhans take enough of a salary to be able to afford an apartment, albeit with two roommates, in New Haven, Connecticut. As the interest in GoodLands’ services grows, Burhans wants to keep the momentum going.

“The thing we have to realize as Catholics is that our land management directly supports every single one of our missions (as church) in the long run,” she said. “Whether you’re talking about community health, mental health and well-being, economic development, all of these things are tied together.”

NEXT: Pittsburgh Diocese to reduce number of parishes from 188 to 57