Music stirred his heart, led him to cusp of priesthood 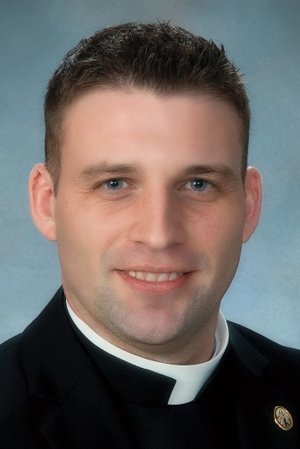 Last in a series of profiles on the six men to be ordained priests for the Archdiocese of Philadelphia on May 19. See the series in our Profile section.

Transitional Deacon Kyle Adamczyk, 31, will be among the six men to be ordained to the priesthood by Archbishop Charles Chaput at the Cathedral Basilica of SS. Peter and Paul on May 19.

Like most of his brother seminarians, he thought long and hard before he entered St. Charles Borromeo Seminary. In fact for his first Come and See weekend retreat to the seminary he kept it secret even from his own family.

He made the visit at the suggestion of a friend who was also considering the priesthood. Although his friend ultimately decided not to become a priest, he did. God does indeed work in mysterious ways.

The son of Ed and Rosemary Adamczyk, he was raised in Our Lady of Peace Parish, Milmont Park. After graduation from the parish school he went on to Cardinal O’Hara High School.

From an early age Kyle was involved in music one way or another, including at his parish, where the music director Steve Denkin took him under his wing. This continued at Cardinal O’Hara and after that onto Delaware County Community College. Music, in one form or another, was part of who he was.

After Denkin’s death, Father John Collins, the pastor at Our Lady of Peace, acting on a suggestion by the choir master before he died, asked Kyle to take over the choir, which he did.

At that point Kyle had no clear idea what he would do for the rest of his life. The thought of being a teacher of music was appealing, and he worked on the side as an orchestra conductor at Archbishop Carroll High School while also working part time at Kohl’s Department Store, which could lead to a retail management career.

It really was music that drew him into a deeper spiritual life. He recalls when he was younger going to Mass with his parents, “mostly it wasn’t participating in the Mass, it was just sitting there. Through the choir I started learning more about the liturgy, and I loved it,” he said. 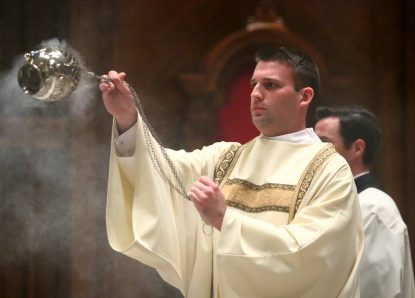 Rev. Mr. Kyle Adamczyk blesses the congregation with incense during the Chrism Mass March 29 at the Cathedral Basilica of SS. Peter and Paul, where he will be ordained a priest May 19. (Photo by Sarah Webb)

By the time he received his associate’s degree at Delaware County Community College he was beginning to see the possibility of the priesthood. Nevertheless he enrolled at Immaculata University where he majored in music and theology, and became active in the choir, campus liturgies and a campus ministry.

Through this experience, “I learned more about my own spiritual life,” he remembers.

It was during that first visit to St. Charles while sitting alone in the chapel at night before the Blessed Sacrament that Kyle made his final decision to become a priest. “I was looking at the altar, looking at the sanctuary lamp, and knew this is where I needed to be,” he said.

Although his family was surprised they were totally supportive, he remembers.

When Kyle entered in 2012 he really didn’t know what to expect, and it did take a bit of getting used to. He was accustomed to going and coming as he pleased, and making his own decisions with not many rules to follow.

“There are things that ground you here and become part of your life. You get used to it,” he said.

His spiritual life changed in ways he never knew existed. He was introduced to the spirituality of St. Ignatius of Loyola, lectio divina, a method of immersing oneself in the Scriptures.

“My spiritual director taught me that,” he said, “and it really works.”

Looking back, he can think of many priests who influenced him over the years, starting perhaps with Msgr. Joseph Duncan, who was a parochial vicar when he was a young child at Our Lady of Peace. Most recently he points to Msgr. John Marine, the pastor of St. Bede the Venerable Parish in Holland where he has served his deacon assignment.

Now in a few weeks he will be Father Kyle Adamczyk.

“I love people, I love being around them,” he said. “I want to share my love with them and the way I can do that is by bringing Christ into their lives.

”I’ve been forming myself for six years,” he added. “I’m ready to go out to work with the people of Christ, to bring them alive to the faith, and that’s what I am looking forward to doing.”