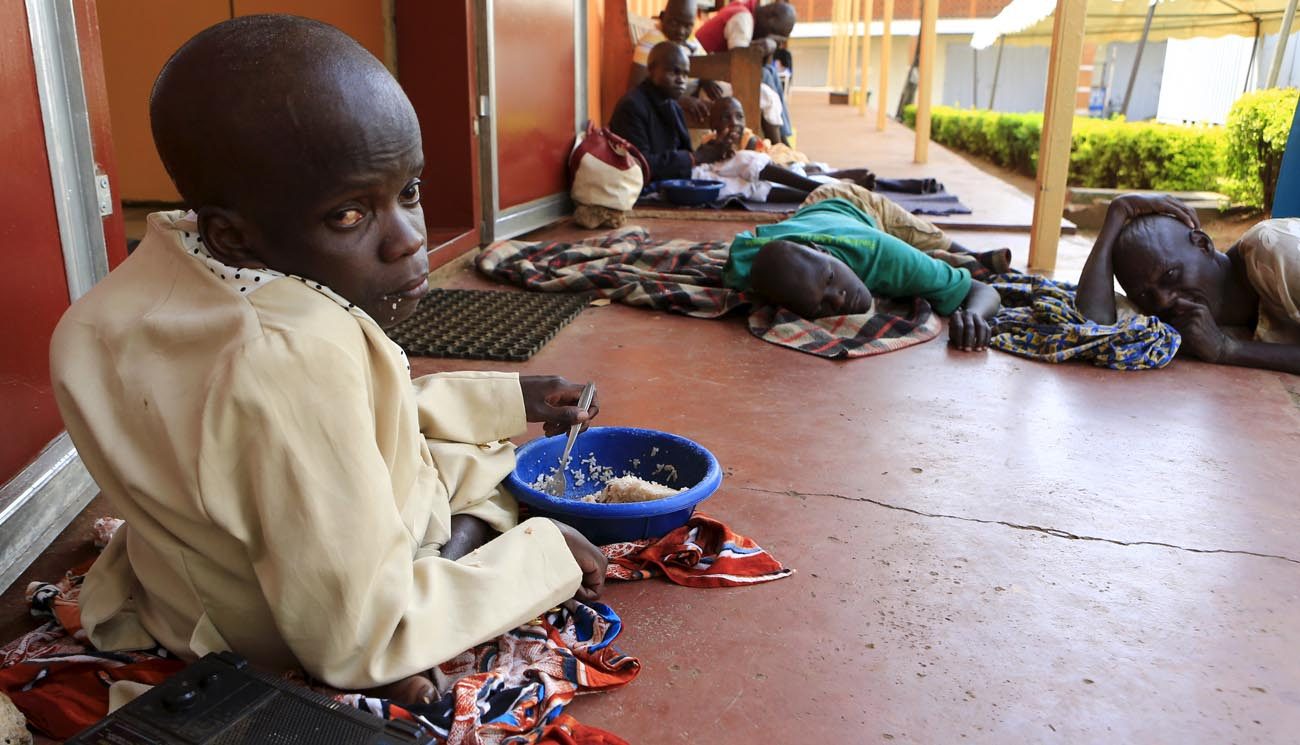 A boy eats his meal in 2015 at Mapeera Bakateyamba's Home near Kampala, Uganda. Economic globalization has led to activities that "cause poverty and show a complete disregard for the poor," said Archbishop Charles Palmer-Buckle of Accra, Ghana. He was one of 25 bishops and more than 35 participants from Europe and Africa who met April 12-15 to discuss the effects of globalization on the church and cultures in Europe and Africa. (CNS photo/James Akena, Reuters) (CNS photo/James Akena, Reuters)

CAPE TOWN, South Africa (CNS) — While globalization at its best can enable the sharing of spiritual and material riches, it also can lead to huge destruction, the bishops of Europe and Africa said after a four-day meeting in Fatima, Portugal.

Globalization is a dynamic process that “affects all areas of individual, family and social life, including economics, politics, culture and religion,” said an April 16 statement by the Council of European Bishops’ Conferences and the Symposium of Episcopal Conferences of Africa and Madagascar.

Twenty-five bishops were among the more than 35 participants from the two continents who met April 12-15 to discuss the effects of globalization on the church and cultures in Europe and Africa. Cardinal Manuel Clemente, patriarch of Lisbon and president of the Portuguese bishops’ conference, and Bishop Antonio Marto of Leiria-Fatima hosted the meeting.

Participants discussed the impact of globalization on young people, on migration, and in the understanding of humanity and human ecology.

Economic globalization has led to activities that “cause poverty and show a complete disregard for the poor,” said Archbishop Charles Palmer-Buckle of Accra, Ghana, noting that land bought cheaply in African countries for mining or manufacturing activities often displaces people, breaks up families, and damages the environment.

The world’s powerful people and countries, particularly those linked to transnational corporations, “enjoy the fruits of globalization at the expense of the poor,” the SECAM treasurer said in an April 14 telephone interview from Fatima.

The bishops from Africa and Europe discussed the need to work together to address these and other common problems, he said.

“It’s our task as church leaders to help our countries to correct these excesses,” he said.

“Adequate legislation must be put in place to ensure that the vulnerable are not exploited,” Archbishop Charles Palmer-Buckle told CNS, noting that increased human trafficking and internet-based criminal activities were among the “negative effects of globalization” that were discussed at the meeting.

When misused, social media can “disorientate children and intrude in family life,” he said.

“When used sensibly,” online activities, including social media, “can help communication and increase knowledge, but family members need to know that they must control this, and not allow this to control them,” he said.

The European and African bishops’ joint statement said that, on one hand, globalization “can serve justice and peace” and “can spread noble and constructive ideas and values.”

Yet, globalization, “when marked by sin as is often the case today, tends to cause a profound gap between rich and poor, between powerful and weak; it strengthens the struggle for power, for growing profit and hedonism; it destroys the legacy of high culture, spirituality, and human dignity, triggering a deconstruction of the very foundations of existence,” the statement said.

“The negative aspects of globalization demand an active and courageous vigilance on the part of priests, consecrated persons, lay faithful, all believers, and people of good will,” it said.

Urging effective action in support of their educational work with families, the bishops noted that “the defense of the poor, sick, marginalized and weak is not optional but imperative.”

The bishops renewed “their dedication to their communities and their continents,” and prayed for “the gift of peace for the world, especially for many areas where conflicts are prolonged or intensified,” the statement said.

Italian Cardinal Angelo Bagnasco of Genoa, president of the Council of European Bishops’ Conferences, told participants in the meeting that, in some parts of Europe, it seems that Christianity is dying and faith is considered outdated.

To different extents, secularism has reached all the countries of Europe, he said, noting that secularism causes society to become bureaucratic and soulless.

For this reason, the European church’s greatest challenge is to engender faith, said Cardinal Bagnasco, who is also president of the Italian bishops’ conference.

Faith, “with Jesus Christ at the center,” needs to lead all areas of pastoral care, he said.

Archbishop Gabriel Mbilingi of Lubango, Angola, president of the Symposium of Episcopal Conferences of Africa and Madagascar, said for the African church to be a true “spiritual lung” for humanity, all of its people need to practice reconciliation, justice and peace.

The two continental groupings have held joint meetings since 2004, Archbishop Palmer-Buckle said, noting that the regular discussions “of common concerns and how they affect the people in our different countries” has helped to “build better pastoral solidarity.”

PREVIOUS: Pope, Christian leaders condemn use of violence against Syria

NEXT: Catholic leaders: Winnie Mandela was a friend to South Africa’s poor