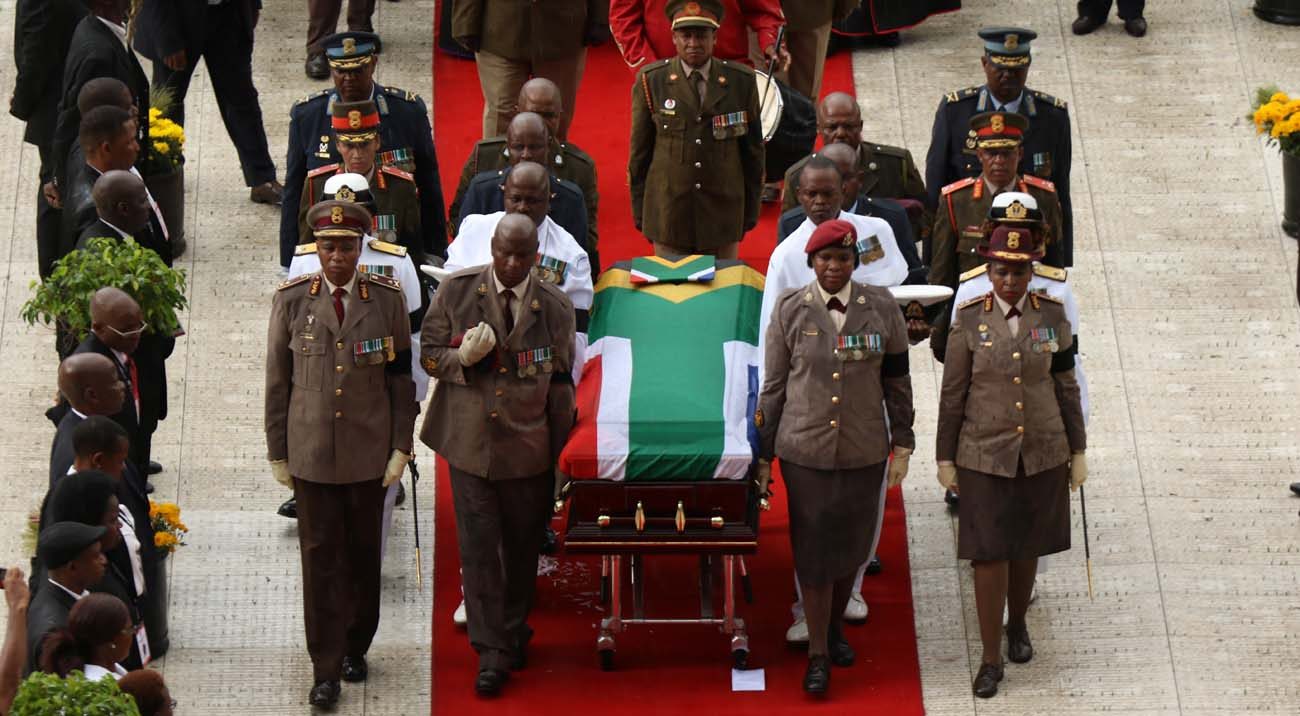 Winnie Madikizela-Mandela's coffin is taken from the Orlando stadium in Soweto, a township outside Johannesburg, during her April 14 funeral service. (CNS photo/Philimon Bulawayo, Reuters)

“Victims of rape and all kinds of abuse always knew that they could call on Winnie, who would be there for them,” said Bishop Victor Phalana of Klerksdorp.

Often called the “Mother of the Nation” and “Mama Winnie,” the ex-wife of the late South African President Nelson Mandela “mothered everybody,” said Bishop Phalana.

Madikizela-Mandela died April 2 at age 81. The April 14 funeral service in Soweto, a township outside Johannesburg, was attended by tens of thousands of people and was followed by a burial ceremony at a memorial park north of Johannesburg.

She attended the Wesley Methodist Church in Meadowlands and spent five hours at the Good Friday service there three days before her death, Sister Makoro told Catholic News Service April 12.

Sister Makoro said she and the conference’s associate secretary-general, Stigmatine Father Patrick Rakeketsi, visited the family before the funeral on behalf of South Africa’s Catholic Church and “were well received” by Madikizela-Mandela’s daughters and other family members.

Madikizela-Mandela, who had a “complex history,” was a “courageous leader,” the bishops’ conference said in a statement.

“In her resistance to oppression and in her hatred of injustice, she inspired a whole country, galvanized the youth and inspired women,” it said.

Noting that Madikizela-Mandela had “a suffering and impetuous heart,” the bishops said that witnessing the daily “deep humiliations” of her people and observing as a social worker the injustices and human rights abuses of apartheid “were bound to cloud the mind.”

For Madikizela-Mandela, the anti-apartheid struggle involved separation from her husband and children, banishment and continuous surveillance, “while bearing the expectations of the oppressed millions,” the bishops said.

“Her life was played out against the background of world attention,” they said.

Madikizela-Mandela’s reputation was tarnished when evidence emerged of the brutality of her bodyguards, known as the “Mandela United Football Club.” In 1991, she was convicted of kidnapping and being an accessory to assault, but her six-year jail sentence was reduced on appeal to a fine and a two-year suspended sentence.

“The majority of the poor never stopped loving her,” said Bishop Phalana, who was among thousands of South Africans, including Archbishop Buti Tlhagale of Johannesburg, at an April 11 memorial service in Soweto for Madikizela-Mandela.

Her “positive attributes were so much more than her flaws,” Bishop Phalana said in an April 12 telephone interview.

“Winnie filled the role of mother for so many people who felt abandoned,” he said, noting that she “shared their lives, their pains, their crying and suffering.”