Be fruitful and multiply: Threatened trees planted in Vatican Gardens 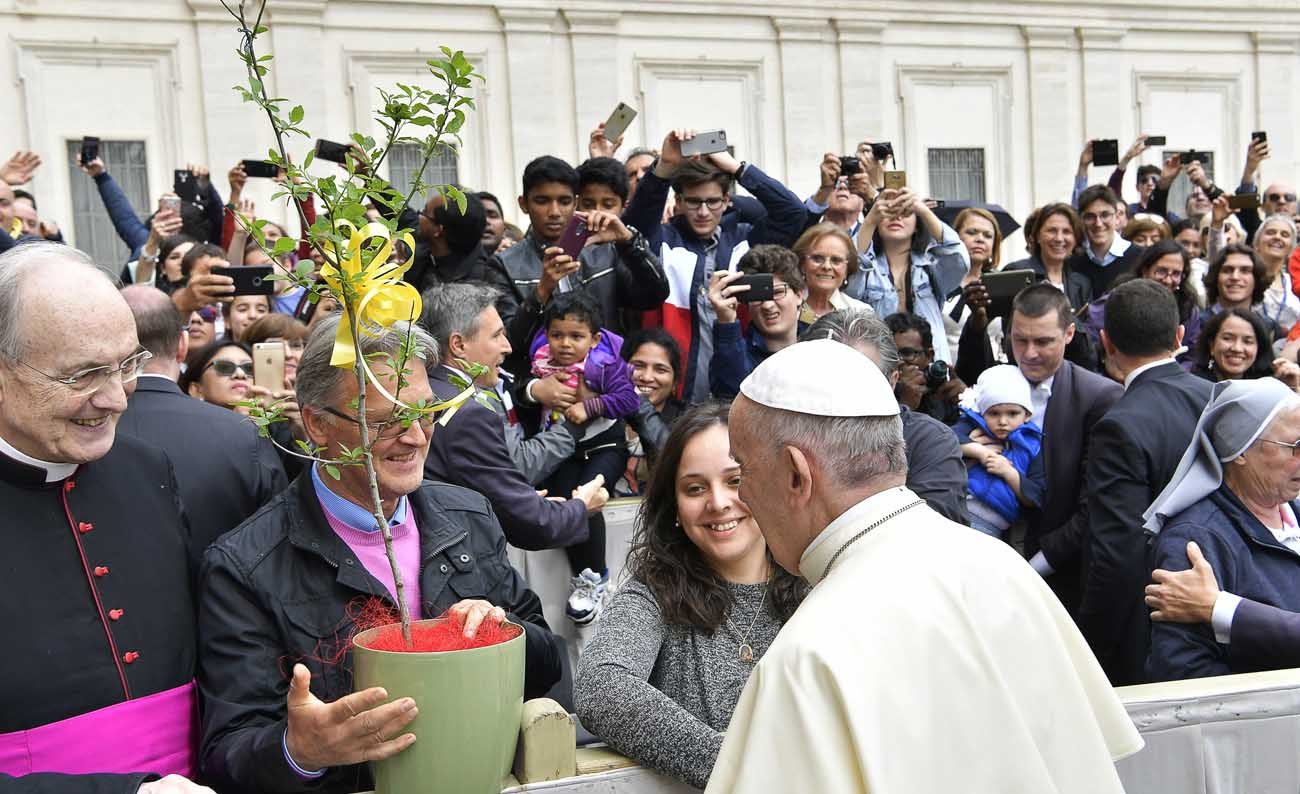 Sergio Guidi, president of the Italian tree conservation association, "Patriarchi della Natura," presents a potted tree to Pope Francis at his general audience April 18. The association presented eight saplings from tree species that are threatened or endangered with extinction. The saplings were planted in the Vatican Gardens. (CNS

VATICAN CITY (CNS) — The Vatican Gardens has branched out and added a small orchard to its hillsides, becoming a safe haven for a number of endangered native Italian fruit and nut tree species.

If all goes well with weather and pollination, the eight new saplings planted behind St. Peter’s Basilica should be bearing fruit in just a few years. Hopes are for a harvest including pomegranates that can weigh as much as three pounds each and a natural hybrid fruit called the “susincocco,” which could be translated as a “plumpricot” — a dark red fruit that has the juiciness of a plum with the tastiness and velvety feel of an apricot.

The Italian tree conservation association, “Patriarchi della Natura,” made the donation as part of its national effort to protect biodiversity by collecting and propagating native tree species that are threatened or in danger of extinction in their natural habitats.

Sergio Guidi, the association’s president, greeted Pope Francis at the end of his Wednesday general audience April 18 with a large potted tree decorated with a big yellow bow.

“The Pope’s Orchard” will be a small “field gene bank” or collection of living plant species in need of protection, the association said in a written press release.

The donated fruit and nut trees represent some of Italy’s oldest and most rugged species that are naturally resistant to inclement weather and pests, which means they do not need pesticides or other chemicals, it said.

— One “St. John” pear tree and one “St. John” plum — both named because the fruit ripens around June 24, the feast of St. John the Baptist.

— The “sussincocco,” also known as the “black apricot of the pope,” which ripens in July.

— An old apple tree species from the Apennine Mountains and another apple tree sapling “reproduced” from what had been the oldest apple tree in Italy and one of the oldest in Europe; it grew in the Alps of northern Italy before it died. Both bear fruit in September.

— A “San Giovanni Rotondo” almond tree that comes from the town where St. Pio of Pietrelcina lived and died. Tradition says that St. Pio prayed and blessed from his window the town’s almond trees whose leaves and flowers had been devoured by caterpillars. Even though the trees had been reduced to looking like sticks, they miraculously produced the most abundant harvest ever that fall, according to legend. It’s the largest almond tree species in Italy, and its trunk can reach 13 feet (four meters) in circumference.

— The “giant Faenza pomegranate” tree that produces fruit at the end of October.

— The “Natalino” fig tree from Basilicata — named because its fruit ripens around Christmas — is a graft from one of the biggest fig trees alive in Italy.

“This model of garden-orchard that allows for conserving very old plant genes should be seen as a role model and replicated in other countries too where biodiversity is at risk of extinction,” the association said in its statement.

According to the conservation network, Global Trees Campaign, more than 10,000 tree species are threatened with extinction around the world.