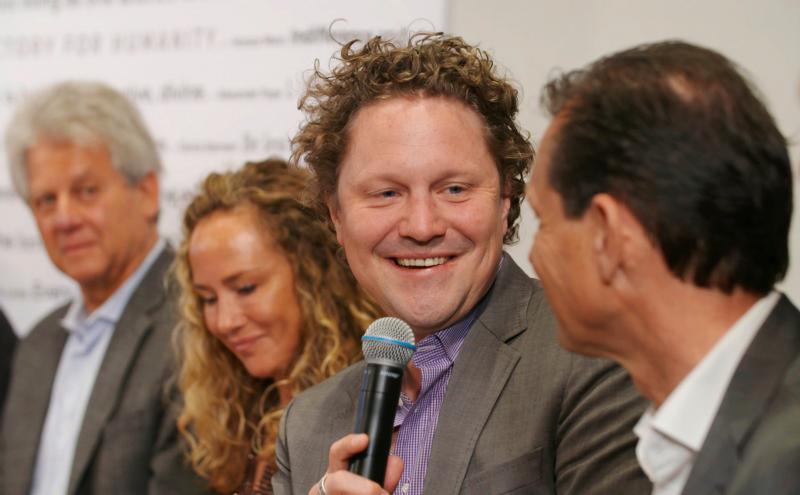 Brendan Doherty, co-founder of Forbes Impact, speaks at a meeting of business, science and humanities leaders associated with the Humanity 2.0 project at the Vatican April 20. The daylong event kicked off a process of connecting people with different resources, but who are all committed to improving the lives of others. (CNS photo/courtesy Emmanuel Massou, Longbeard)

A project called “Humanity 2.0,” supported by the Vatican Dicastery for Promoting Integral Human Development, designed the daylong event April 20 to kick off a process of connecting people with different resources, but who all are committed to improving the lives of others.

During the meeting, the discussions moved from the concept of tenderness to ways tenderness becomes action and to a multisession discussion about the worrying state of maternal and prenatal medical care and ways to address it.

“Healthier mothers are an investment in the health and well-being of our communities and our world,” Marie-Louise Coleiro, president of Malta, told the gathering. She particularly challenged Humanity 2.0 participants to brainstorm concrete ways to improve holistic care — medical, psychological and spiritual — for pregnant women and new mothers who are migrants or refugees.

“The challenge is to translate our love for humanity into real service to our brothers and sisters,” said Jesuit Father Michael Czerny, undersecretary of the Vatican office for migrants and refugees. “We cannot claim to have or promote ‘integral human development’ if we leave some people out.”

Jennie Joseph, a midwife and executive director of Commonsense Childbirth in central Florida, spoke about the increasing rate of maternal mortality in the United States — the only developing nation in which the rate of mothers dying during or shortly after delivery has increased over the last 25 years. And, she said, “there are three or four times as many black women dying.”

“In the U.S.,” she said, “our maternal mortality is so outrageous that you cannot believe it’s the world’s richest country.”

Dr. Christine Hemphill, an OB-GYN from Pennsylvania, represented the U.S. Catholic Medical Association at the Vatican meeting, which she described as an effort “to turn our thoughts of caring into action.”

Commenting specifically on the situation Joseph described and its detrimental impact on pregnant women and new mothers, Hemphill said that because of its medical malpractice laws Florida, in effect, forces physicians to practice “defensive medicine” that sharply increases the rate of cesarean sections and “puts women at risk.”

Proper maternal and prenatal care must recognize “there are two patients involved,” the mother and her baby, she said.

Rabbi Riccardo Di Segni, the chief rabbi of Rome, noted how in English and Italian, “humanity” is both a reference to all human beings and the description of a virtue. And “tenderness,” he said, “is not cultural, it’s natural.” In fact, he said, “tenderness is the noble part of our nature.”

For the entrepreneurs and financiers at the Vatican meeting, tenderness also is an important part of doing business ethically and successfully.

Brendan Doherty, co-founder of Forbes Impact, which promotes investments that create both financial gain and positive social change, told participants, “We are beyond the point where we can be barons by day and philanthropists by night.”

Ensuring business and investment practices are both profitable and socially beneficial has “virtuous, but also other motivating factors,” he told Catholic News Service.

The “sword and shield” of a smartphone allows people to capture and share something that happens at a business, research a company’s history and practices and communicate the findings to others and reactions to the company, he said. It creates pressure to do better.

“Every investment has an impact whether we acknowledge it or not,” he said. The challenge is to “transform the economy to create value not only for the shareholders.”