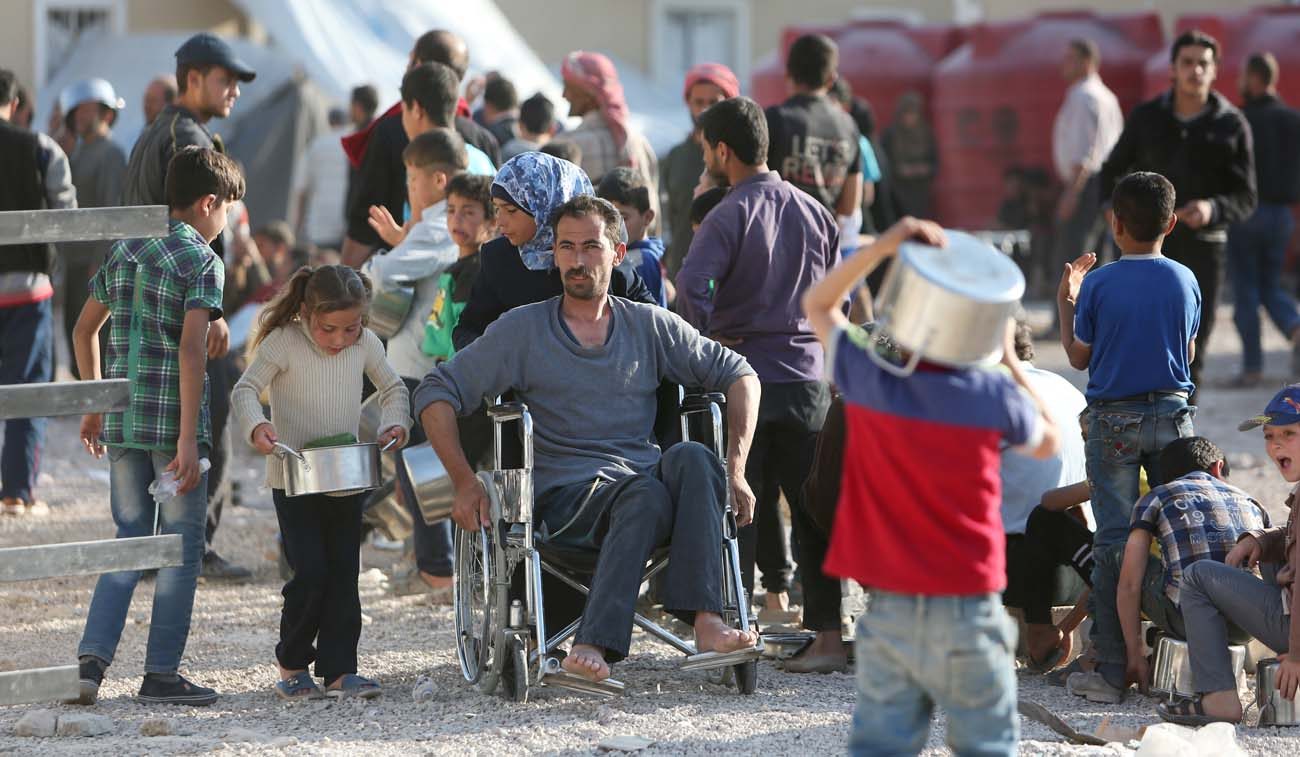 A displaced man from Ghouta, Syria, sits on a wheelchair in a Herjelleh shelter April 15. (CNS photo/Ali Hashisho, Reuters)

“We have enough pain in our lives, we don’t need any more,” said Sandra Awad, communications director for the Catholic aid agency Caritas Syria, adding that such intervention does not solve the crisis.

“Those (strikes) won’t help. It’s the opposite. They are opening the wounds of our hearts. We don’t want to live in war anymore,” Awad told Catholic News Service by telephone from Damascus April 19. “When we heard the bombardment, we felt, ‘please, no, not again.'”

Awad explained that those “living in the areas close to the targeted points were very afraid.”

She said a Muslim family receiving Caritas aid, having earlier fled Ghouta and now living in the Barzeh district of Damascus, told her that “everyone was shaking and crying because they have already been traumatized.”

“They suffered a lot during the war, with the father killed and a son who his lost legs from mortar shell fired into Damascus” from the once rebel-held area, which for the past six years fired shells into the Syrian capital.

Pope Francis sharply criticized the inability of world leaders to find a nonviolent means to restore peace to Syria after the April 14 attack.

“I am deeply disturbed by the current world situation, in which, despite the instruments available to international community, it struggles to agree on joint action in favor of peace in Syria and other regions of the world,” he said.

During an address to the European Parliament April 17, French President Emmanuel Macron acknowledged that the strikes likely did not “resolve anything” in the region, but were nevertheless “important” for preserving the “honor of the international community.”

Critics suggested that prior notification limited the effectiveness of the attacks carried out in response to the Syrian government’s alleged use of a nerve agent and chlorine gas, killing dozens of civilians in Ghouta.

Caritas Syria is the country’s branch of Caritas Internationalis, the Catholic Church’s international network of charitable agencies. Awad said Caritas is doing what it can to meet the huge needs of many suffering the violence, now in its eighth year, which has engulfed the beleaguered country. It provides food and nonfood necessities to a large number displaced throughout the country due to fighting.

“They lost everything, their properties, their houses. They are forced to rent tiny apartments in big cities, and the rent is very expensive,” Awad said of money used to pay rent in Damascus and Aleppo, where some reconstruction is beginning.

“We are helping families with destroyed houses in Aleppo to return to their homes and live there instead of paying high rents or staying in shelters,” she said.

Medical assistance is also provided in Damascus, Aleppo, Hasakeh, Homs and the Houran.

“Family medical expenses are very high. Sanctions prohibit materials needed to make medicines. Most of the medical (or pharmaceutical) factories have been destroyed. All the good doctors left the country and emigrated. Half of the health centers are also destroyed,” Awad explained.

This means patients requiring medical treatment can often wait very long to see an available physician and even months for surgery.

“Paying for medical expenses is very difficult for Syrian families, so charities must help pay for medical care, otherwise they wouldn’t get any medication, examinations, etc.,” she said. “Surgeries are expensive and require assistance from other charities as well.”

Caritas is also providing psychosocial support to children in Damascus and Aleppo most affected by the grinding conflict.

“They are likes sponges that absorb all the dirt of the war,” Awad said of those who try to express the fear they feel by drawing “blood, cutting heads, and shells raining down.”

“They are very vulnerable. The psychosocial team uses activities to make them more comfortable, express their feelings, their fears, and to get relief from the trauma they have suffered,” she added.

Caritas also assists some 150 elderly in Aleppo and helps to pay for tuition, uniforms, and stationery used by Syrian university and other students still in school. .

“More and more elderly come to the Caritas centers for help, because most of the young people left the country and their parents behind without any income or care,” she said.

“We have been responding to those fleeing the Syrian conflict for eight years. The poorest and most vulnerable people in Syria have been the most impacted,” he told CNS.

“They do not need more bombs. Syria needs serious diplomacy between all parties to end the conflict. Further violence only leads to more suffering and displacement,” O’Keefe said.