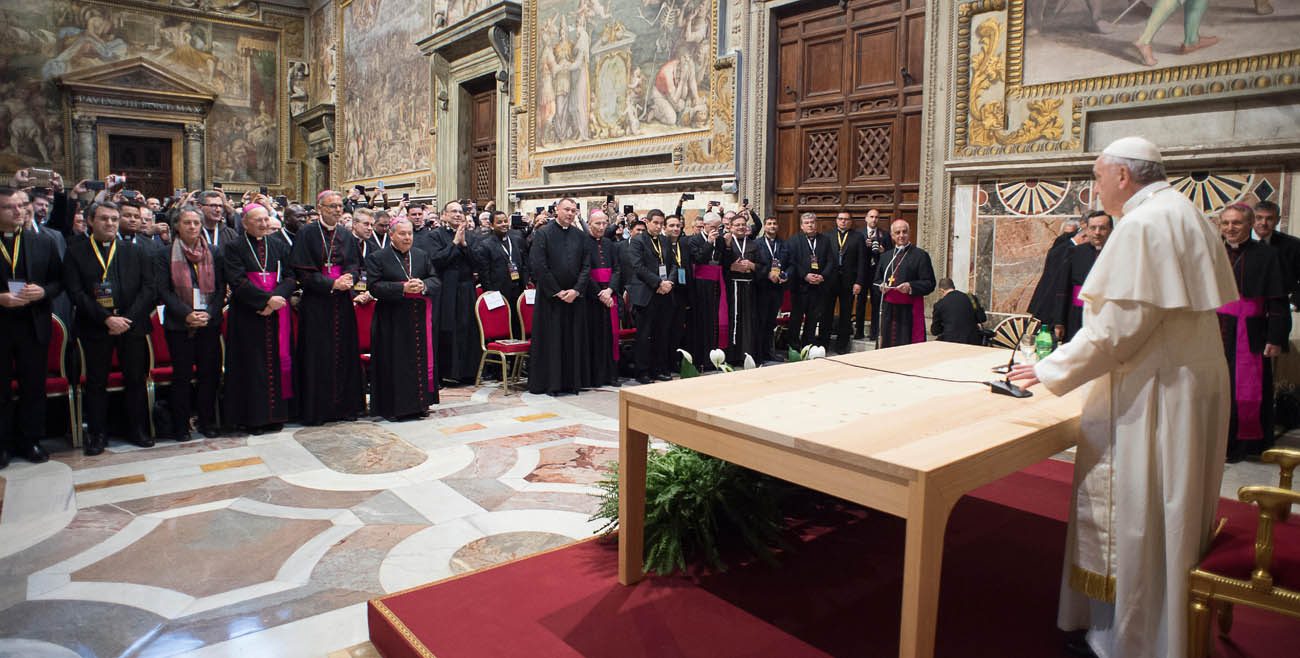 Pope Francis speaks April 10 to some 550 "missionaries of mercy" in the Sala Regia of the Apostolic Palace at the Vatican. The pope, who originally commissioned the priests during the Year of Mercy, has extended indefinitely their special mission of preaching God's mercy and showing it, especially through the sacrament of reconciliation. (CNS photo/Vatican Media)

VATICAN CITY (CNS) — As a sign that God’s mercy cannot be limited, Pope Francis has recommissioned his special army of priests charged with bringing that divine mercy to everyone.

Originally instituted in 2016 for the Year of Mercy, the “missionaries of mercy” were invited to return to Rome April 8-11 to share their experiences and to be reaffirmed in the ministry of mercy.

Meeting them April 10, Pope Francis said they had offered such a needed service to the church, he wanted their mandate, which temporarily had been extended past the jubilee year, to continue indefinitely.

“We must truly recognize that God’s mercy knows no limits and with your ministry you are concrete signs that the church cannot, must not and does not want to create any obstacles or difficulties that prevent access to the Father’s forgiveness,” he told them.

In his many remarks and writings, the pope has shown that his vision for this unique ministry reflects the attentive zeal of the good shepherd — who cannot sit idly by, but must go out and search when a member of his flock goes missing — and the forgiving father of the prodigal son, whose love never wanes as he celebrates with sincere joy his wayward child coming home.

“Pope Francis has asked us to be models and to show the behavior of a forgiving God,” said Father Bernard Olszewski, a New Jersey-born missionary of mercy incardinated in the Diocese of St. George’s in Grenada.

“The vision of the pope is that all those who feel alienated from Jesus might be received back into the arms of a loving and merciful God,” he said.

“The worst sin that we could commit is to alienate ourselves from God” and believe “we can never be forgiven,” Msgr. Ted Bertagni, a Nebraska-born missionary of mercy, told CNS.

“That places someone in their own personal hell, and I believe that the vision of Pope Francis is that no one deserves to be placed in that position,” said the monsignor, who is incardinated in the Diocese of Mandeville, Jamaica, and is director of clergy and diocesan relations for the Florida-based Cross Catholic Outreach.

To pull people out of a dead end of despair, the pope has called the church to be — with its missionaries as models — like a field hospital, to aid and heal the wounded; like a father, who forgives and guides; and like a mother, who nourishes and generates new life in Christ.

During their April 10 meeting, the pope gave the missionaries an in-depth reflection on the “doctrine of your ministry” so they could continue to serve the way God wants and needs: by being “men who bring the world his forgiveness and mercy.”

At the same time, the pope said there is nothing special about a missionary of mercy — no “extraordinary charisma” that places them above anyone else.

They are just “normal priests, simple, meek” and even keeled, who place special emphasis on preaching about God’s love, hearing confessions and granting absolution; they have been granted special authority or faculties to pardon even those sins reserved to the Holy See.

Father Olszewski said being able to forgive a repentant sinner “without having to say, ‘I need to clear this with someone,’ has been a monumental, monumental experience in the life not only of the person who received that grace, but the ability of me as God’s minister to be able to transmit that grace.”

He and Msgr. Bertagni said many people who had not been to confession in years, sometimes decades, had been drawn to sit down with them, in part because there was more publicity and extended hours for confession during their visits to parishes and because people felt more comfortable speaking anonymously with an “outsider.”

Msgr. Bertagni said, “It was a very moving experience for me because oftentimes you get a laundry list” of sins, “but these were really moments of real catharsis for these people,” with the powerful, emotional impact of “God’s mercy really touching them.”

People, he said, seemed more willing to confess knowing the priest would embrace them, without judgment, like the prodigal son.

When asked about criticisms or concerns that a generous attitude of forgiveness may signal too much leniency or diminish the gravity of sin, Msgr. Bertagni said God’s unconditional love “does not lessen the fact that a sin is a sin, it doesn’t lessen the impact that sin has on other people’s lives.”

“It’s a fine line between emphasizing the gravity of sin and how that affects people,” since all sin impacts others, and how God’s love is so “enormous and unbounded” that he will always welcome the contrite back, he said.

When the priest says, “Go and sin no more,” he said, it is about going forth to “live the life that God has called you to live.”

It is “asking a penitent to envision what their ideal relationship with God should be, how that should be lived, not to look at what they did, but rather whom do I wish to be? What is the fullness of my being as a son or daughter of a loving God? And how do I respond to that call of love?” Father Olszewski said.

“Then we can say, ‘These things do not fit with that vision and, therefore, you need to remove them from your life as best as you can'” and avoid or remove habits or situations that would tempt people to sin again, he added.

Pope Francis sees the shame and embarrassment sin provokes in a human heart as God already secretly at work, niggling and nudging the person to seek relief, peace and joy again through reconciliation.

That is why he insists confessors do everything that will not impede or undermine what may be a slow, gradual flowering of conversion, and to see the wounds of sin as a doorway that can be opened to encounter God.