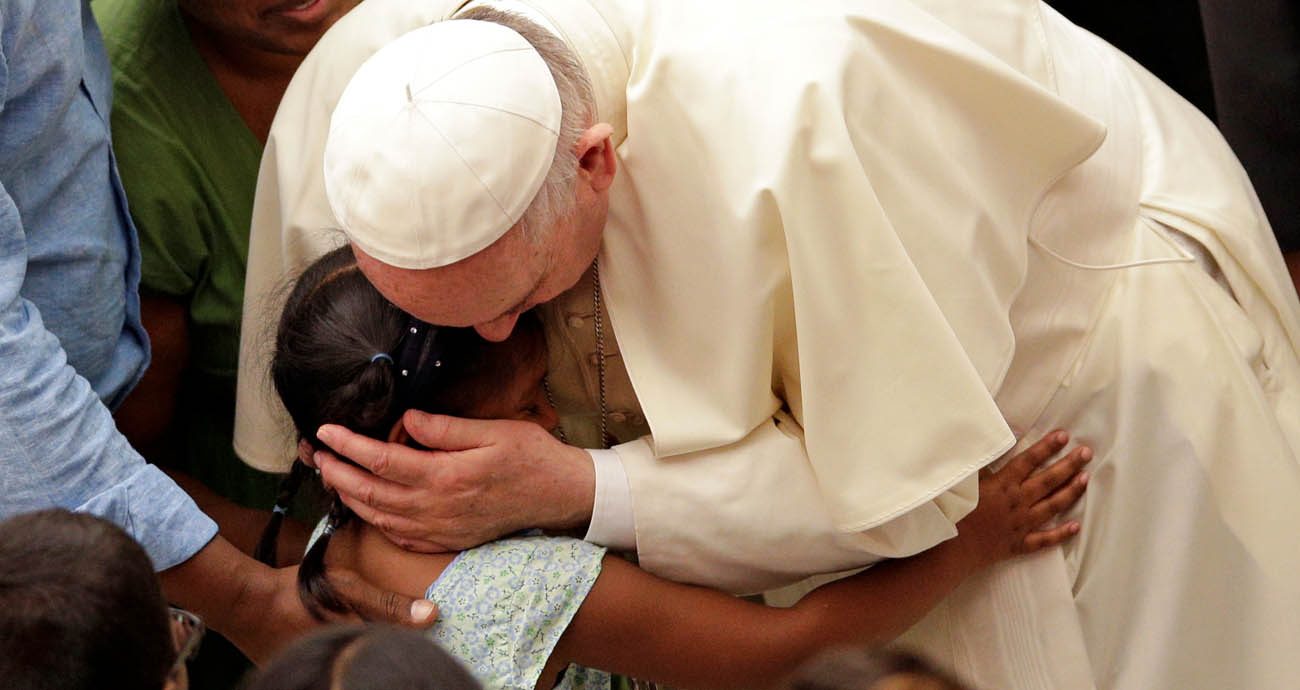 A child is embraced by Pope Francis during his weekly audience in Paul VI hall Aug. 2 at the Vatican. (CNS photo/Max Rossi, Reuters)

VATICAN CITY (CNS) — Parents who prefer not to baptize their children in the hopes that they will “understand and ask for baptism” as adults lack faith that the Holy Spirit will act in their child’s life, Pope Francis said.

While some believe that there is no need to “baptize a child that does not understand” the meaning of the sacrament, the pope said doing so would deny the chance for “Christian virtues to grow within that child and blossom.”

“Always give this opportunity to all children: to have within themselves the Holy Spirit that will guide them in life. Do not forget to baptize your children,” the pope said during his weekly general audience in St. Peter’s Square April 11.

Arriving in the square under cloudy skies, Pope Francis once again picked up several children who rode around in his popemobile while he circled around to greet thousands of pilgrims.

After dropping them off, the pope made his way toward the stage when he was greeted by some unlikely guests at the audience: three llamas.

According to the Italian newspaper Corriere della Sera, the three llamas — named Buffon, Shaquiri and Tiento — along with their owner and his two traveling companions, began their pilgrimage to Rome in February. The pilgrims traveled over 650 miles on foot from the northern Italian province of Bolzano to meet the pope.

The names of two of the llamas seemingly reference two soccer greats — Gianluigi Buffon and Xherdan Shaqiri — while Tiento is also the name of the 1930 World Cup soccer ball.

The pope greeted the pilgrims and smiled as he saw the llamas, which are indigenous to South America.

In his main talk, Pope Francis reflected on the sacrament of baptism as “the foundation of Christian life.”

As the first of seven sacraments, he said, baptism “is the door that permits Christ the Lord to make his dwelling in us and allows us to immerse ourselves in his mystery.”

While being immersed in water is a common ritual “in various beliefs” that signifies the passing from one condition to another, Pope Francis said Christians must never forget that just as the body is immersed in water at baptism, so is the soul “immersed in Christ to receive forgiveness from sin and shine with divine light.”

“By virtue of the Holy Spirit, baptism immerses us in the death and resurrection of the Lord, drowning the old man — dominated by the sin that divides us from God — in the baptismal font and giving birth to the new man, recreated in Jesus. In Him, all the sons of Adam are called to new life,” the pope said.

The pope, who often tells people to look up the date of their baptism, called on those who don’t remember the date to ask their family and to celebrate it like a birthday and “give thanks to the Lord because it was on that day when Jesus entered” in their lives.

“We should all know the date of our baptism. It is another birthday, it is the day of our rebirth,” he said.

Although baptism occurs only once in a Christian’s life, Pope Francis said, “it illuminates our entire life, guiding our steps until (we reach) the heavenly Jerusalem.”

“No one deserves baptism, which is always a gift for everyone, adults and newborns. But like what happens to a seed full of life, this gift takes root and brings forth fruit in a land nourished by faith,” the pope said.

NEXT: Door to door: Pope reaffirms missionaries’ mandate to knock on hearts