French bishops on euthanasia: ‘Killing can in no case be a cure’ 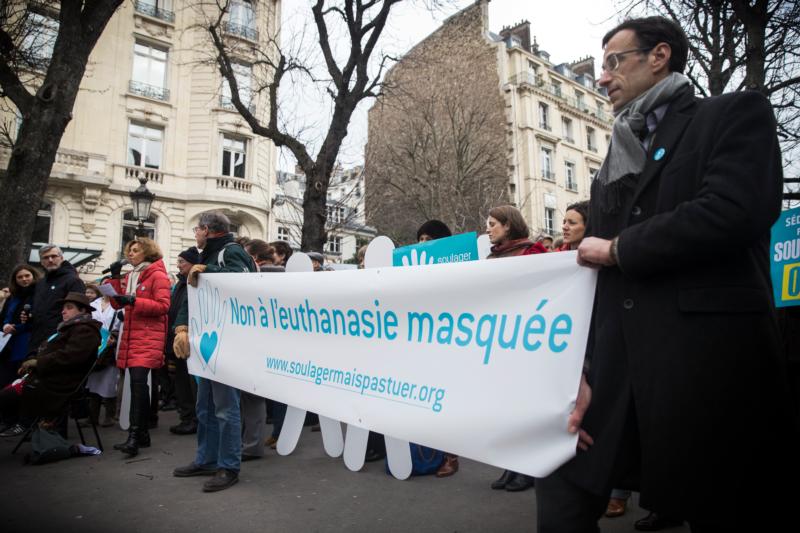 Activists carry a banner stating “No to hidden euthanasia,” during a protest in Paris. More than a hundred French bishops have signed a statement opposing their country’s drift toward legal euthanasia. (CNS Photo/Etienne Laurent, EPA)

LOURDES, France (CNS) — More than a hundred French bishops have signed a statement opposing their country’s drift toward legal euthanasia.

At the end of meeting at the Marian shrine of Lourdes, 118 bishops — the overwhelming majority of the French bishops’ conference — declared that euthanasia would damage the sense of fraternity that held their society together.

They predicted that euthanasia would put pressure on the gravely ill, vulnerable and elderly to end their lives prematurely, and that it would corrupt medical ethics.

The bishops said euthanasia would give rise to “institutions specializing in death” similar to those seen in some neighboring countries, such as Belgium and Switzerland, where euthanasia or assisted suicide is already legal.

To permit euthanasia, the bishops said, would be to “inscribe in the heart of our society the transgression of the civilizing imperative: ‘You shall not kill.'”

“The signal sent out would be dramatic for all and, especially, for people of great fragility, who often torn by this question: ‘Am I not a burden for my family and for society?” they said.

“Whatever legal subtleties are sought to stifle the problems of conscience, the fratricidal gesture would rise in our collective consciousness as a repressed and unanswered question: ‘What did you do with your brother?'” the bishops continued.

The six-point March 22 declaration, called “End of Life: Yes to the Urgency of Fraternity,” came in response to increasing calls to allow euthanasia, following claims that palliative care in France is inadequate.

In their statement, the French bishops lamented the scarcity of palliative care in some areas of the country, but argued that euthanasia was not the answer.

Medical professionals, they said, would come to see some lives as “no longer worth living” while the bond of trust between doctor and patient would be gravely undermined.

“Killing, even under the guise of compassion, can in no case be a cure,” the bishops said.

While a conscience clause might offer some medical staff protection from involvement in the killing of patients, it offered no protection whatsoever to the aged or vulnerable, the bishops noted.

Such people, including those who were asking to die, needed “supportive care,” the bishops said, and deserved “attentive accompaniment, not a premature abandonment to the silence of death.”

“It is a true fraternity that is urgently needed — it is the vital link of our society,” they said.

The signers of the letter, who included three cardinals, were also severely critical of the ideology of absolute autonomy they described as “illusory” and which they blamed for driving the demand for euthanasia.

“Our personal choices, whether we like it or not, have a collective dimension,” the bishops said. “The injuries of the individual body are wounds of the social body. If some people make the desperate choice of suicide, society has a duty to prevent this traumatic act. This choice must not enter social life through legal cooperation.”

The bishops instead encouraged their fellow citizens and legislators to renew their commitment to a fraternal society “where we will take individual and collective care of each other.”