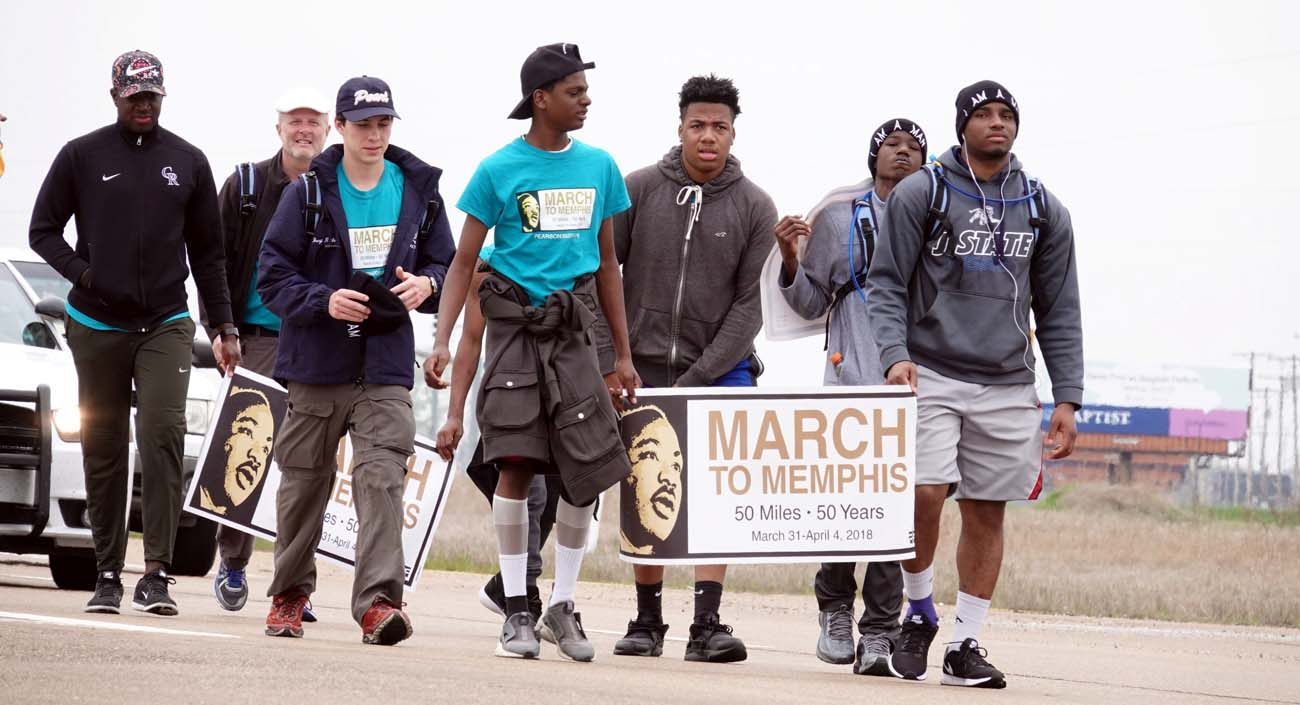 A group of teenagers from Pearl, Miss., walk along U.S. Highway 61 just south of Memphis, Tenn., April 2, on their 50-mile "March to Memphis" tribute to the Rev. Martin Luther King Jr. April 2. April 4 marks the 50th anniversary of the death of the civil rights leader in Memphis. (CNS photo/Karen Pulfer Focht, Reuters)

VATICAN CITY (CNS) — The Rev. Martin Luther King Jr.’s dream of a dignified life for all men and women regardless of color or creed continues to live on in the teachings of one his most influential admirers, Pope Francis, a Vatican representative said.

Speaking to Vatican News April 3, the eve of the 50th anniversary of Rev. King’s assassination, Archbishop Ivan Jurkovic, Vatican observer to U.N. agencies in Geneva, said both the slain civil rights leader and the head of the Catholic Church have “brought universal attention to a new vision of the world.”

“Of course, Martin Luther King did it in the defense of human rights of the African-American people. The pope, instead, brings a new vision of the church,” Archbishop Jurkovic said.

Rev. King’s legacy of nonviolent resistance to the injustices suffered by African-Americans in the United States, he said, began a “new era” that ushered in “a general development of society and democracy” in the world.

The first principle “is nonviolence, a principle that has become somewhat problematic today in the face of the many violent actions that surround us. Then there is the principle of universal fraternity: to consider all people as beneficiaries of the same brotherhood,” Archbishop Jurkovic said.

Those principles, he added, not only must remain relevant for those working at a bureaucratic level crafting policy in the United Nations but must be defended by influential leaders in society today.

“Pope Francis does it — he does it in a splendid way — and everyone recognizes the role he has gained in such a short time,” the archbishop said. “The pope believes that the only future worthy of the human person is one that includes everyone.”

Archbishop Jurkovic said that all people must pursue and defend this vision which brought about change through the life and death of Rev. King.

“We can all be happy, but this only comes if all are included, from the last one to the most privileged and vice versa,” he said.

PREVIOUS: French bishops on euthanasia: ‘Killing can in no case be a cure’

NEXT: Christ is victorious over all that divides people, pope says