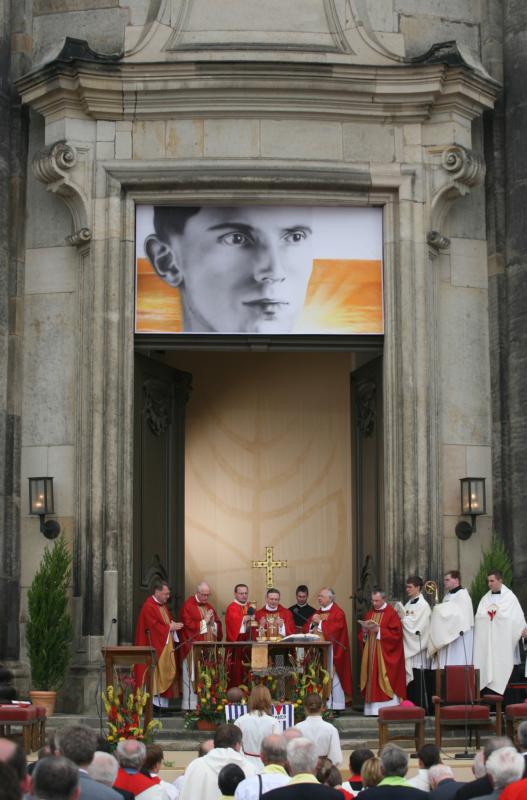 An image of Father Alois Andritzki hangs above the altar during his Mass of beatification in Dresden, Germany, in this 2011 file photo. The young German priest was executed in 1943 at the Nazi death camp of Dachau. (CNS photo/KNA-Bild)

EMMITSBURG, Md. (CNS) — When a virulent typhus epidemic swept through a World War II concentration camp in Dachau, Germany, in early 1945, many imprisoned Polish priests volunteered to minister to the dying men.

Eighteen clerics were chosen to go to the typhus block, each knowing he was almost certainly agreeing to a death sentence. All the priestly volunteers contracted the disease, with only two surviving it.

The heroism of those Polish priests is but one example of many feats of faith among the more than 2,500 Catholic priests, brothers and seminarians imprisoned at the Nazi-run camp.

Eileen Lyon, professor of history at State University of New York at Fredonia, has researched the “priest barracks” of Dachau. She recently discussed her study during the spring meeting of the American Catholic Historical Association April 12-14 at Mount St. Mary’s University in Emmitsburg.

In an interview with the Catholic Review, news outlet of the Archdiocese of Baltimore, Lyon said that more than 1,000 Catholic clerical prisoners died at Dachau, sometimes by torture.

She noted that the Catholic Church already has beatified 56 of the clergymen and the causes of many more are being studied.

Catholic priests, brothers and seminarians, along with clergy from other denominations, were sent to Dachau because they posed a threat to the Nazi regime. They included German clergy who had spoken out against Hitler or his policies. A much larger group was composed of clerics from the occupied territories, including many from Poland.

At Dachau, a political re-education camp established in 1933 in an abandoned munitions factory near Munich, three barracks were designated for priests: numbers 26, 28 and 30.

In December 1940, clergy held at other camps began to be transferred to Dachau, Lyon said, following intervention from the Vatican and German bishops who were concerned about the “very harsh” treatment they were undergoing. At the Gusen concentration camp near Linz, Austria, for example, many died working in a quarry.

Because clergy were exempt from heavy labor, she said, the Nazis decided to find other “uses” for them at Dachau.

“They did horrific experiments with malaria and with temperature,” the historian said. “They were pseudo-medical experiments that had no scientific value.”

Nazis permitted ethnically German priests to celebrate Mass in a chapel erected in Barrack 26. But Polish priests, for significant periods of time, were barred from the chapel. They celebrated Masses in their barracks or work sites, Lyon said, or German priests smuggled consecrated hosts to them so they could receive the Eucharist.

A common tactic among the Nazis was to offer freedom to any priest who promised to renounce his priesthood.

“I can’t find anyone who took them up on that,” Lyon said. “It’s not possible to say whether that’s because of their deep commitment to the priesthood or they didn’t trust the deal.”

Lyon said one of the most extraordinary moments in the history of the concentration camp was the priestly ordination of Blessed Karl Leisner, a young German who received the sacrament by an imprisoned French bishop. Blessed Leisner had already been ordained a deacon prior to his arrest by the Gestapo.

“He was terminally ill (with tuberculosis),” Lyon said, “and just so desired to receive that sacrament of ordination.”

Diaries and reflections written after their release show many clerical prisoners found their faith deepened after surviving Dachau.

“They felt they were contemplating the faith in a much purer way,” she said. “They talk about the way it really deepens their experience, and they understand what it is to rely upon God in a way they didn’t before.”

After Americans liberated Dachau in April 1945, many clerical prisoners returned to academia and pastoral ministry within months. Others were so weakened by their ordeal that they were physically unable to continue ministry.

About a dozen of the former prisoners became bishops, and some participated in the Second Vatican Council.

“In their memoirs, they really talk about reconciliation,” Lyon said. “There is not a sense of bitterness, a sense of blame, particularly in terms of the Germans who had perpetrated this.”

Rebuilding the Catholic Church after World War II was a tremendous task, Lyon said. Some dioceses in Poland lost more than half their priests, with many summarily executed at the outset of the Nazi invasion.

“The task of rebuilding the church is a very difficult one,” Lyon said. “There’s also the coming to terms and trying to address the fact that the torture they endured (and) the genocide that had been committed was something perpetrated by the baptized. So how do you try and restart the spiritual life of Europe after that?”

Lyon said researching the Holocaust is difficult because “you are confronted with evil on a scale that’s hard to imagine.”

“When you see them able to forgive all they had suffered,” she said, “it’s a very powerful witness to the faith that they have.”

The interview with Lyon was broadcast on the radio program “Catholic Baltimore” and can be heard here.

PREVIOUS: The church, like a bike, balances best when in motion, pope says