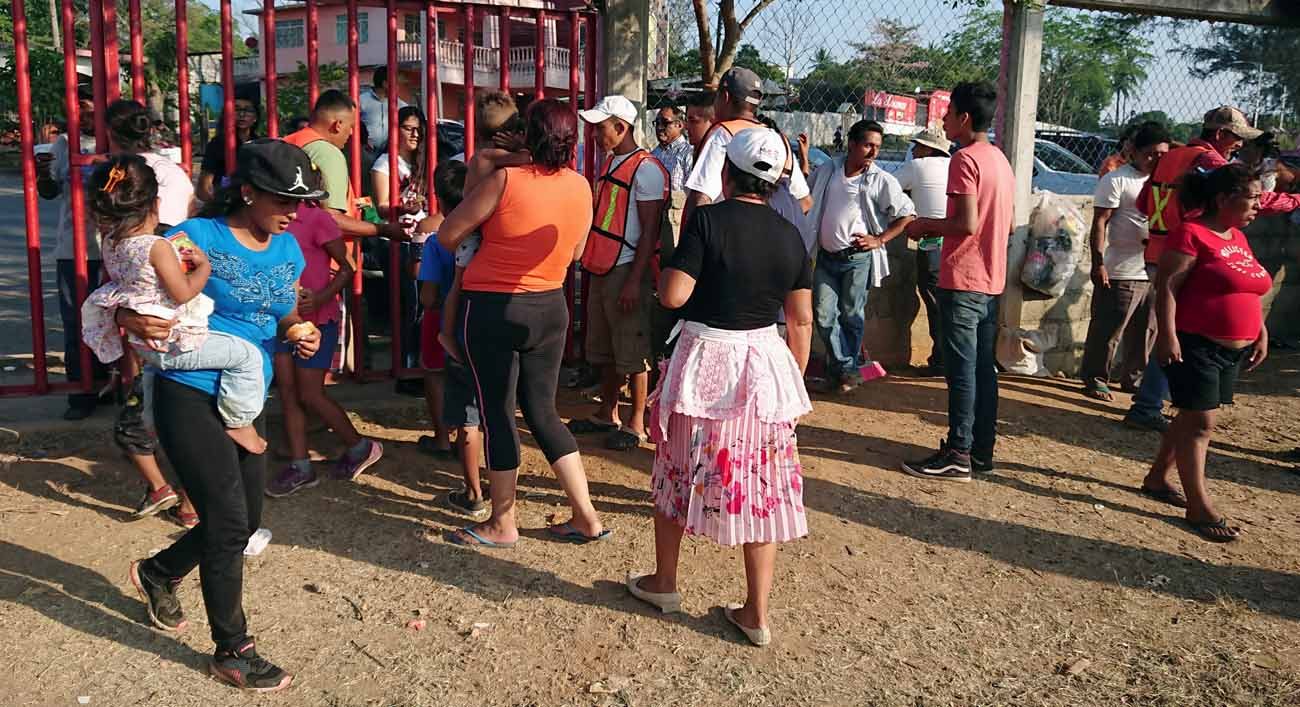 Central American migrants participating in a caravan heading to the U.S. receive water from Catholic volunteers April 2 in Oaxaca, Mexico. The caravan of migrants transiting Mexico was stopped after its push to the U.S. border set off a barrage of criticism from U.S. President Donald Trump. (CNS photo/Jose de Jesus Cortes, Reuters)

MEXICO CITY (CNS) — A caravan of Central American migrants traveling through Mexico was stopped after its push to the U.S. border set off a barrage of criticism from U.S. President Donald Trump.

The caravan of more than 1,000 migrants was winding its way through the Isthmus of Tehuantepec in southern Oaxaca state April 2 when the Mexican government announced it would move to break up the mass movement of people through the country.

In a joint statement, the interior and foreign relations ministries said the migrants — mostly from the violent and tumultuous northern triangle of Central America: Guatemala, Honduras and El Salvador — would be subject to “administrative procedures.”

Most would be given 10 days to leave the country, though they could ask for extensions, while those considered “vulnerable” such as pregnant women and the infirm could receive humanitarian visas, media outlets reported.

“Under no circumstances does the government of Mexico promote irregular migration,” the statement said.

Migrant caravans commonly move through Mexico, highlighting the plight of people fleeing poverty, gang violence and, in the case of Honduras, political repression after an election considered by critics to have been rigged. The caravans also call attention to the travails of traveling through Mexico, where undocumented migrants are routinely preyed upon by kidnapping gangs and crooked public officials.

The most recent caravan, organized by the migrant advocacy group Pueblos Sin Fronteras, became controversial after conservative media warned of an “invasion” and Trump targeted the mass movement of Central Americans. In series of tweets, he tersely told Mexico to stop the caravan.

“The big Caravan of People from Honduras, now coming across Mexico and heading to our ‘Weak Laws’ Border, had better be stopped. … Cash cow NAFTA is in play, as is foreign aid to Honduras and the countries that allow this to happen. Congress MUST ACT NOW!” Trump tweeted.

The perceived inaction of Mexican officials caused consternation north of the border, but several sources working with migrants and involved in immigration issues said many of the marchers in past caravans set out after applying for either humanitarian visas or asylum, allowing them freedom of movement.

“What we have seen … is when the caravan is followed in the media, the authorities keep their distance,” said Alberto Xicotencatl, director of the diocesan migrant shelter in the northern city of Saltillo. “But when the march ends, there are repercussions against the migrant and those that defend their rights.”

Many Catholic priests, nuns and laypeople assist migrants as they traverse Mexico by operating a network of shelters, which run the length of the country and offer humanitarian and legal assistance.

Yet the shelter operators expressed wariness with the caravan, saying in a statement they would stay on the “margins,” while supporting the goal of safe migration.

“They have good intentions, but they’re exposing (the migrants)” to danger, including trips on “La Bestia,” a freight train that migrants steal rides on, said Jorge Andrade, spokesman for a coalition of mostly Catholic-run shelters known as the “You Are Us Collective.” The caravan “doesn’t have a sense of migrant protection.”

Xicotencatl’s shelter and representatives of other shelters accompanied a caravan in 2014, but found the movement became infiltrated by human smugglers and “people pretending to be migrants,” who extorted others moving north.

The shelters, meanwhile, “collapsed” under the strain of serving so many migrants, while security screening — done with each guest arriving — became impossible. So many migrants arriving at the border also presented problems, Xicotencatl said, noting very few would cross, and those remaining become targets for kidnappers.

Both Xicotencatl and Andrade said previous caravans have put priests in dangerous parts of Mexico at risk as many in the caravan arrived without a plan and some of the organizers engaged in imprudent activism, which targeted and angered organized crime.

“We realized that being demanding is not the only thing that is important,” Xicotencatl said. “It’s also important the people develop a strategic plan” for what they’ll do upon arriving at the border, so that their efforts do not end up making them even more vulnerable.

PREVIOUS: Christ is victorious over all that divides people, pope says

NEXT: Leave Mass praising God, not gossiping about others, pope says