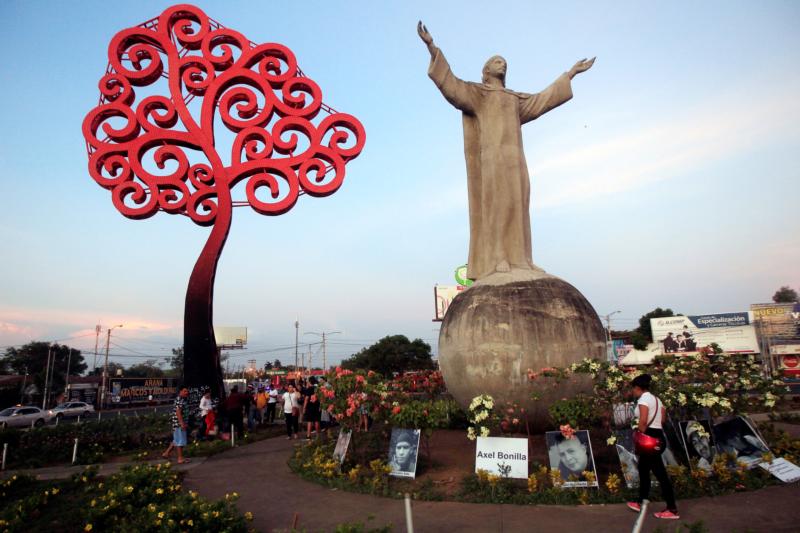 People in Managua, Nicaragua, are seen April 23 at a makeshift memorial for demonstrators killed during protests against a reform to pension plans. The bishops’ conference of Nicaragua has accepted an invitation to mediate talks aimed at calming the Central American country. (CNS photo/Jorge Cabrera, Reuters)

MEXICO CITY (CNS) — The bishops’ conference of Nicaragua has accepted an invitation to mediate talks aimed at calming the Central American country, which has been roiled by protests over proposed changes to the national social security system and discontent with an increasingly authoritarian government.

“The (bishops) after praying, listening and seeking guidance from the Holy Spirit, accept being (part of), in the character of ‘mediator and witness’ the dialogue convened by the President Daniel Ortega Saavedra … in the face of the very serious situations the Nicaraguan nation has experienced and intensified in the past week,” the bishops said in an April 24 statement.

“To facilitate the climate of dialogue, we consider it essential and imperative that both the government, along with each member of civil society, avoid all acts of violence, disrespect for public and private property and that a climate of serenity and absolute respect for human life … prevails.”

Protests in Nicaragua have claimed 25 lives and left more than 400 injured — the product of a heavy-handed crackdown, human rights observers allege.

Ortega, whose Sandinista government returned to power in 2006, has canceled the proposed social security reforms, but protesters have stayed in the streets and demanded his ouster, accusing the president and his family of corruption, cracking down on the media and stifling dissent.

The Jesuit-run University of Central America, commonly called UCA, was the scene of a protest repressed by police April 18. The university, Jesuits in Nicaragua and Latin America and the Association of Jesuit Universities and Colleges all called on the authorities to respect the rights of citizens and students to protest.

“The damage caused to our facilities as a part of this aggression was significant, an attack carried out with impunity,” read an April 21 letter signed by six Jesuit priests, including the provincial for Central America, Father Rolando Alvarado. “We are worried (our) academic and civic work will be distorted with false accusation intending to display the UCA as a promoter of violence and social instability.”

Ortega thanked the bishops and the conference president, Cardinal Leopoldo Jose Brenes, for their acceptance in mediating an end to the dispute. Observers say polling shows the church is considered the country’s most trusted institution, and few others could carry out a mediation role.

“Separate from the average citizens, the elites on each side have some reasons to distrust the Catholic Church,” said James Bosworth, a former Nicaragua resident and founder of Hxagon, a political risk analysis firm.

“The opposition dislikes the church’s previous willingness to work with Ortega on banning abortion. The government is obviously nervous due to the church’s criticisms of Ortega’s authoritarian tendencies in recent years,” he said.

“That distrust means both sides know the church is an institution that is not in the pocket of the other side. That can give them a credible mediation position,” he said.

PREVIOUS: Pope to host ecumenical prayer for peace in the Middle East

NEXT: Listening must lead to action, clerical abuse survivors say