Pope joins meeting to prepare synod for the Amazon 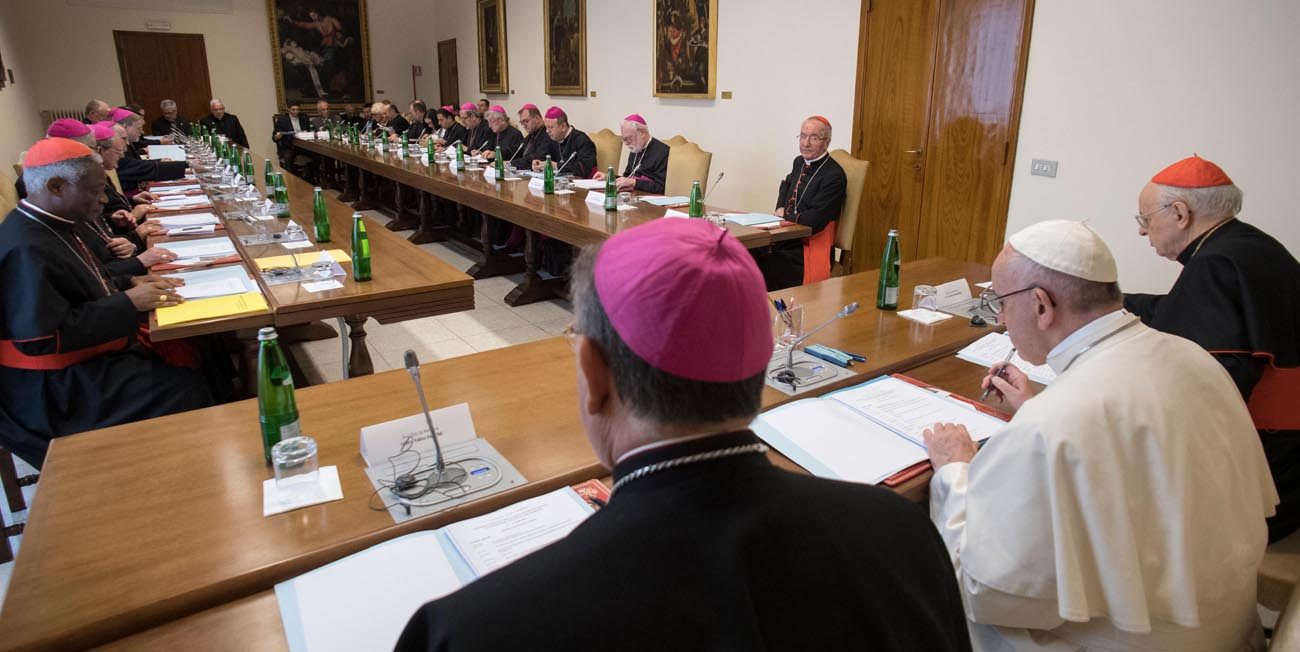 Pope Francis meets with members of the preparatory council for the Synod of Bishops for the Amazon region at the Vatican in this photo dated April 12-13 and released by the Vatican April 14. The synod will take place in October 2019. (CNS photo/Vatican Media)

VATICAN CITY (CNS) — Pope Francis met with members of the preparatory council for the Synod of Bishops for the Amazon region, which will take place in Rome in October 2019.

Meeting in Rome April 12-13, the presynod council worked with Cardinal Lorenzo Baldisseri, secretary-general of the Synod of Bishops, to finalize the preparatory document and related questionnaire for the special assembly next year.

The council members and several experts on the Amazon, who were invited to attend, discussed the pastoral needs in the territory, especially the need “for a more incisive inculturation of the Gospel for the people who live there, particularly the indigenous people,” the Vatican said in a statement April 14.

They also “reflected on the ecological crisis affecting the region and underlined the need for promoting an integral ecology along the lines” of the pope’s 2015 encyclical “Laudato Si’, on Care for Our Common Home,” the Vatican said.

Announcing the gathering of bishops last October, the pope said the synod will seek to identify new paths of evangelization, especially for indigenous people who are “often forgotten and left without the prospect of a peaceful future, including because of the crisis of the Amazon forest,” which plays a vital role in the environmental health of the entire planet.

The theme chosen by Pope Francis for the synod is: “The Amazon: New paths for the church and for an integral ecology.”

Jesuit Father Fernando Roca Alcazar, one of five experts chosen by the Pan-Amazonian Church Network to attend the presynod meeting, told Vatican Media’s Spanish edition that he was proud to take part in defending and protecting the Amazon “where I have lived for many years not only as a Jesuit, but also before I became a Jesuit when I was a child.”

Those who addressed the presynod council, he added, sought to improve the preparatory document and address the challenges facing the indigenous population of the Amazon “in a fraternal atmosphere.”

Father Roca also told Vatican Media that the pope’s presence at the meeting “was very inspirational. He has an amazing humanity; his presence was discreet, always listening, yet always close to everyone.”

In a video posted on the Vatican Media website, Pope Francis said that although the Synod of Bishops for the Amazon will take place in Rome, the synod “began in Puerto Maldonado, Peru.”

“The native Amazonian peoples have probably never been so threatened on their own lands as they are at present,” Pope Francis said. “Amazonia is not only a reserve of biodiversity, but also a cultural reserve that must be preserved in the face of the new forms of colonialism.”

Among the 18 members of the synod council are three cardinals, 13 bishops, one nun and a layman — the majority of them are from countries in the Amazon region.

NEXT: Pope, Christian leaders condemn use of violence against Syria