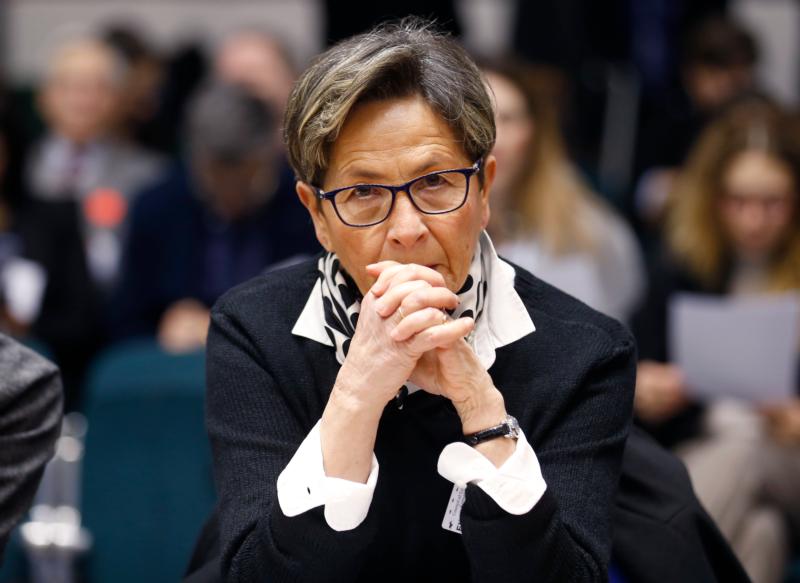 Viviane Lambert, the mother of Vincent Lambert, waits for the start of an hearing concerning the case of her son at the European Court of Human Rights in Strasbourg, France, in this Jan. 7, 2015, file photo. Vincent Lambert, 42, a quadriplegic since an automobile accident in 2008, has been on a feeding tube at a hospital in Reims. The hospital has ordered his food and water be removed April 19. (CNS photo/Vincent Kessler, Reuters)

VATICAN CITY (CNS) — Highlighting the plight of a seriously ill toddler in Great Britain and a severely brain-damaged man in France, Pope Francis called for greater respect for every patient’s life and dignity.

After praying the “Regina Coeli” with people gathered in St. Peter’s Square April 15, the pope asked that everyone pray for “people, such as Vincent Lambert in France, little Alfie Evans in England, and others in different countries, who have been living, sometimes for a long time, in a condition of serious infirmity, (and are) medically assisted for their basic needs.”

These “delicate situations,” he said, are “very painful and complex. Let us pray that every sick person may always be respected in their dignity and cared for in an appropriate way for their condition, with the unanimous contribution of family members, doctors and other health-care workers, and with great respect for life,” he said.

Archbishop Vincenzo Paglia, president of the Pontifical Academy for Life, said he strongly hoped there could be an opening of dialogue and collaboration between Alfie’s parents and hospital officials so that “together they may seek the integral well-being of Alfie and caring for his life will not be reduced to a legal controversy.”

“Alfie cannot be abandoned; Alfie, and his parents likewise, must be fully loved,” the archbishop said in a written statement released April 15.

The pope had already asked that all efforts be made to accompany Alfie, whose parents are fighting a legal battle to keep him on life-support.

“It is my sincere hope that everything necessary may be done in order to continue compassionately accompanying little Alfie Evans, and that the deep suffering of his parents may be heard. I am praying for Alfie, for his family and for all who are involved,” the pope tweeted in English and six other languages April 4.

Doctors have not been able to make a definitive diagnosis of the 23-month-old child’s degenerative neurological condition; he has been on life-support at a children’s hospital in Liverpool.

However, doctors at the hospital have said keeping the toddler on life-support would be “futile,” and he should begin receiving palliative care. A high court judge backed a lower court’s ruling saying the hospital can go against the wishes of the family and withdraw life-support.

In an effort to fight that decision, the parents, Tom Evans and Kate James, brought their case to the European court of human rights, which found no indication of any human rights violations and declared their application “inadmissible” March 28.

The parents want to transfer their son to the Vatican-run Bambino Gesu pediatric hospital in Rome to see if it is possible to diagnose and treat his condition, but the high court ruling would prevent that from happening, according to the parents’ lawyer. The parents were expected to ask judges in a court of appeal April 16 to allow their son to continue life-support.

The other person the pope referred to by name was 41-year-old Vincent Lambert, who has been receiving artificial nutrition and hydration at a hospital in France after a motorcycle accident in 2008 left him paralyzed and in a “minimally conscious state.”

Lambert’s wife and his doctor, Vincent Sanchez, want to end continued nutrition and hydration, viewing such support as “unreasonable obstinacy,” while Lambert’s parents have brought their fight to a number of courts to continue basic life support for their son.

The Vatican Congregation for the Doctrine of the Faith clarified in 2012 that providing artificially administered nutrition and hydration to patients, including those in a vegetative state, is morally obligatory except when that support can no longer be assimilated by the patient’s body and, therefore, cannot achieve its purpose or causes significant discomfort.

Artificially administered nutrition and hydration cannot be discontinued for a patient even when physicians have determined with reasonable certainty that a patient will never recover consciousness, the doctrinal congregation said.

PREVIOUS: ‘Is my dad in heaven?’ little boy asks pope

NEXT: Pope joins meeting to prepare synod for the Amazon