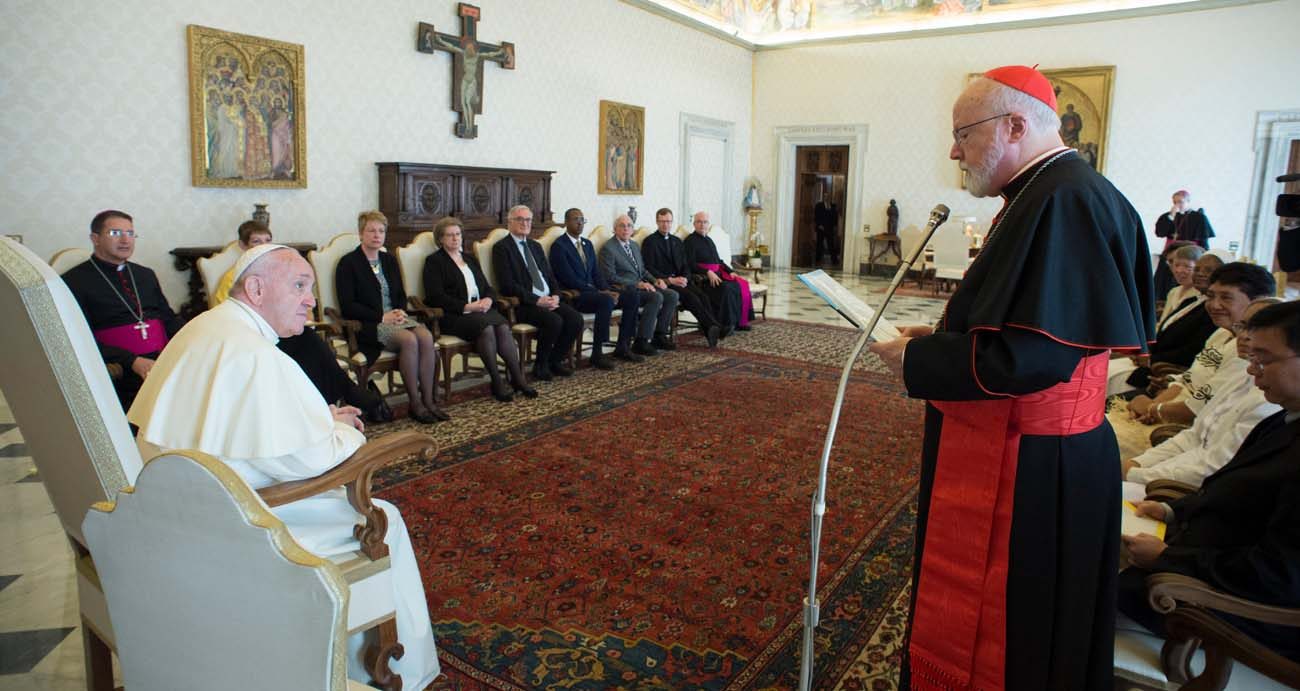 Pope Francis listens as Cardinal Sean P. O'Malley of Boston, president of the Pontifical Commission for the Protection of Minors, speaks during a meeting with members of the commission at the Vatican April 21. (CNS photo/Vatican Media)

VATICAN CITY (CNS) — In its efforts to help advise the pope, the Roman Curia, bishops’ conferences and local churches on protecting minors from abuse, a Vatican commission listened to abuse survivors from Great Britain and discussed the results of Australia’s public inquiry into its country’s institutional responses to abuse.

The plenary assembly of the Pontifical Commission for the Protection of Minors (PCPM) April 20-22 was the first gathering with a group of new members appointed in February.

Pope Francis met with the commission members in a private audience April 21 and had met the day before with Cardinal Sean P. O’Malley of Boston, who is president of the 17-member commission. The commission secretary is U.S. Msgr. Robert W. Oliver, a Boston priest, canon lawyer and former promotor of justice at the Congregation for the Doctrine of the Faith.

The pope said he wanted to confirm the commission’s statutes, which were issued April 21, 2015, “ad experimentum” for a period of three years, according to a press statement by the commission April 22.

During their meeting, according to the statement, members “heard presentations on ‘The outcome of the Australian Royal Commission,’ on ‘The U.N. Convention on the Rights of the Child,’ and on ‘The role of faith communities in overcoming abuse trauma.'”

Members also listened to the survivor advisory panel of the National Catholic Safeguarding Commission from England and Wales.

An unidentified speaker from the advisory panel said, “I hope our visit will help the PCPM to develop a wider network of survivors who are willing to advise and support the ongoing work of the commission in a similar way.”

The panel’s contribution was meant to reflect the papal commission’s “ongoing commitment to ensuring that the thoughts and contributions of people who have been abused inform all aspects of the commission’s work,” the statement said, as well as “help the commission to develop effective ways to integrate the voice of survivors into the life and ministry of the church.”

After Pope Francis founded the commission in 2014, two abuse survivors were named as members. However, one survivor, Peter Saunders, was asked to take a leave of absence in 2016 after he publicly criticized the way some church leaders had handled accusations of abuse; the other survivor, Marie Collins, quit the group in 2017 over what she described as resistance coming from Vatican offices against implementing recommendations.

In February, the pope reconfirmed Cardinal O’Malley as president, reconfirmed seven of the 14 founding members, and named nine new members, including Teresa Kettelkamp, a former colonel in the Illinois State Police and former director of the U.S. bishops’ Secretariat of Child and Youth Protection.