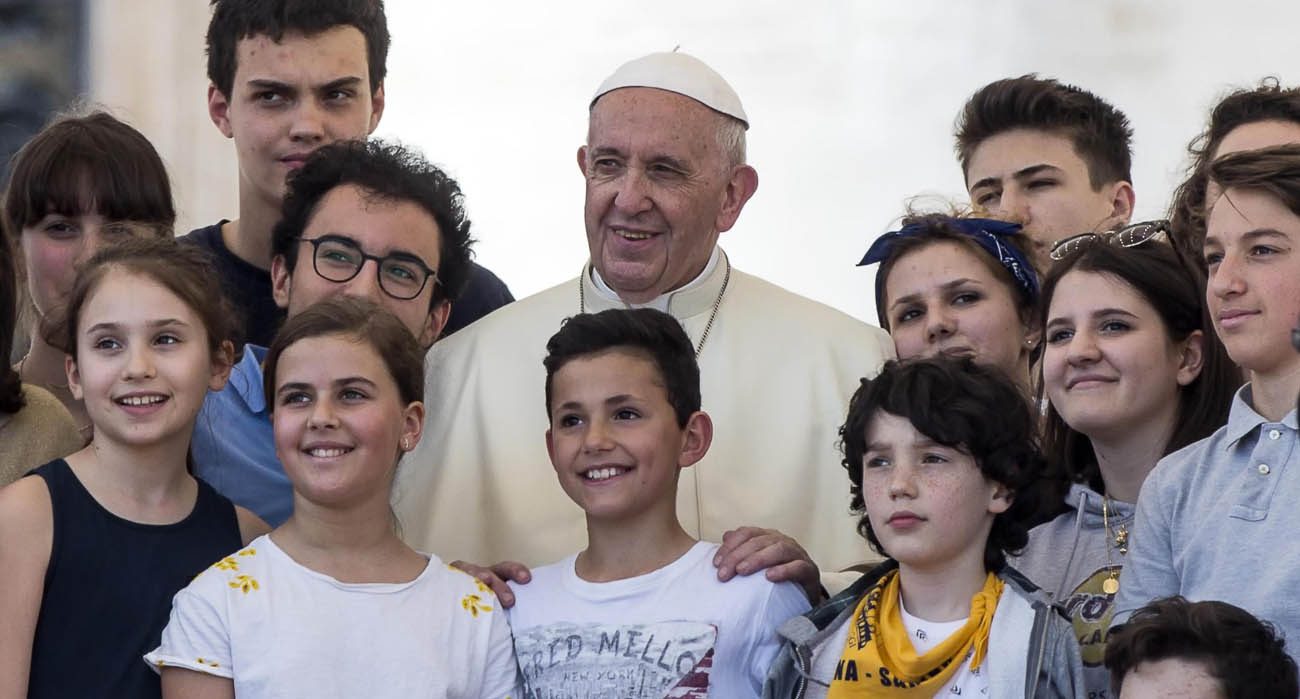 Pope Francis poses for a photo with young people during an audience with faithful from the Italian dioceses of Bologna and Cesena in St. Peter's Square at the Vatican April 21. (CNS photo/Angelo Carconi, EPA)

VATICAN CITY (CNS) — The call to holiness is not only a mission entrusted to all baptized men and women, but also a gift that is shared with others, Pope Francis said.

Meeting with pilgrims from the dioceses of Bologna and Cesena April 21, the pope said Christians are called “to be the leaven of love, brotherhood and hope through small gestures” in their daily lives.

“The men and women of our time need to meet Jesus Christ. He is the path that leads to the Father, he is the Gospel of hope and love that enables” Christians to give of themselves, he said.

The pope circled St. Peter’s Square to greet an estimated 13,000 pilgrims, who sang and waved yellow and white flags bearing the papal arms.

Joined on stage by young men, women and children, the pope recalled his visit to both cities in October 2017 and said he was moved by “the moments of faith and prayer we shared.”

“It was a gift of providence to confirm and strengthen the sense of faith and belonging to the church which translate into attitudes and gestures of charity, especially toward the most fragile,” he said.

During his visit to Cesena, Pope Francis marked the 300th anniversary of the birth of Pope Pius VI who, along with his successor Pius VII, was born in the northern Italian city.

The people of Cesena, he said, are “heirs of these and other important figures of pastors and evangelizers” and “are called to continue along this path, committing yourselves generously to proclaiming the Gospel to your fellow citizens and giving witness to it with deeds, which do not necessarily have to be great,” he said.

Recalling his subsequent visit to Bologna, which coincided with the conclusion of the diocesan Eucharistic Congress, Pope Francis said he hoped the event would “not fade away but would grow and bear fruit, leaving an indelible mark on the path of faith of your Christian community.”

The Eucharist, he added, not only unites the church but also “reconciles and unites us because it nourishes relations within the community and encourages attitudes of generosity, forgiveness, trust in our neighbor and gratitude.”

Pope Francis reminded the pilgrims of Bologna and Cesena that their mission is to follow along a path of holiness that begins at baptism and “that is carried out every day by receiving the Gospel in one’s life.”

“I encourage you to resonate in your communities the call to holiness which concerns every baptized person and every condition of life,” the pope said.

NEXT: Italy grants citizenship to Alfie Evans in attempt to guarantee his care