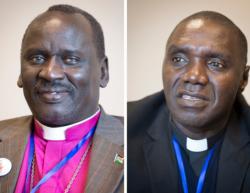 Pentecostal Bishop Isaiah Majok Dau, head of the Pentecostal Church of South Sudan, and Father James Oyet Latansio, general secretary of the South Sudan Council of Churches, are pictured in this composite photo at the headquarters of U.S. Conference of Catholic Bishops in Washington April 23. (CNS photo/Tyler Orsburn)

WASHINGTON (CNS) – News item: A multiparty cease-fire in South Sudan that took effect on Christmas Eve unravels in less than four months. News item: Peace talks to end the civil war in Africa’s newest nation are put on hold indefinitely without an explanation. News item: Seven aid workers are freed after being held by a rebel group for three weeks; 100 aid workers have died during the war, including one March 7, when gunmen fired at a truck marked “Catholic Organization for Relief and Development Aid.”

Amid these headlines and others, none of which are positive, Christian leaders in South Sudan say they must hold out hope for peace in the war-scarred nation.

“It seems to us the American influence is receding,” said Bishop Isaiah Majok Dau, head of the Pentecostal Church of South Sudan, part of the delegation.

Father James Oyet Latansio, general secretary of the South Sudan Council of Churches, said America could declare that “no guns should be imported to South Sudan” as the armed factions — estimates put the number as high as 40 — squabble over wealth and territory.

The bishop and priest were among several South Sudanese Christian leaders in the United States on an April 23-27 visit to urge the United States to use its influence to bring about peace in their country, just as they helped birth the new nation in 2011.

They said the seven Christian denominations in South Sudan represent about 75 percent of the nation’s people. Together, they form the South Sudan Council of Churches.

“We are people that have known nothing but war all our lives,” the bishop said. “We expected there would be acrimony” within the new nation after its split from Sudan, he added. “But this is shell-shock.”

“We are people of hope. We will not stop working. We hope it (peace) will happen in our lifetime,” Father Latansio said.

Together, they worked out an English-language translation to the closing line of South Sudan’s national anthem, with the lyrics stating their own hope for the future: “One day, justice, liberty and prosperity shall forevermore reign.”

Father Latansio said the council of churches has developed a four-point peace plan for the country.

The first point is “to change the narrative” from violence. “We want to change form violence to peace, from revenge to peace,” the priest told Catholic News Service during a break in an April 23 briefing with staffers of the U.S. Conference of Catholic Bishops.

Second is “a neutral forum” for all parties in the conflict to discover what divides them. This forum would “engage the people on the top of the triangle — the government guys — and the people at the grass roots,” Father Latansio said.

The third phase, he added, is reconciliation, especially with South Sudan’s most vulnerable people, including women and children, who have been the most affected by the ongoing violence.

“To add to these three pillars, we want to strengthen the capacity of the nation” of roughly 16 million, Father Latansio said. For that to happen, people must feel comfortable returning to their homes. As many as 4 million South Sudanese were believed at one point last year to have fled the country or been internally displaced; more recent estimates put that number at 2 million.

Even Juba, the seat of government, is unsafe at night, Bishop Dau told CNS.

“We tell our people to go home and not to get caught out at night, because they might get shot at,” he said.

He noted that all the weapons in the multisided civil war are imported. “We can’t even manufacture a pin” in South Sudan, Bishop Dau said. The armaments are coming from “companies that make them and know where to sell them,” he noted, as third parties smuggle cargo containers filled with weapons and ammunition to gain a stronger foothold in their struggle.

Part of the South Sudan religious leaders’ itinerary includes an April 26 appointment with Nikki Haley, the U.S. ambassador to the United Nations. There, they expect to have a receptive ear.

Father Latansio recalled a visit Haley made to a refugee camp in South Sudan.

“She sat on the ground in the camp to listen to the moms. A child translated the speech of the mother to Nikki Haley,” he said.

PREVIOUS: Through work by sisters, church in Cuba extends its reach beyond parishes

NEXT: Doctors criticize court refusal to allow Alfie Evans to go to Italy