Through work by sisters, church in Cuba extends its reach beyond parishes 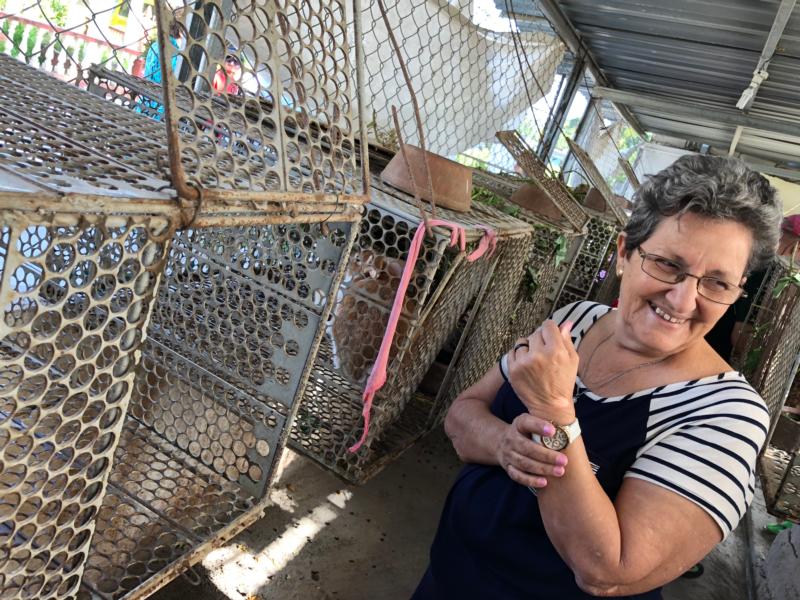 Lidia Rivera stands next to rabbits that live at the community center in Jorobada, Cuba, March 4. Rivera initiated charity work in Jorobada with the help of Caritas as a form of evangelization in 1998. (CNS photo/courtesy Global Sisters Report)

Forbidden by the communist government to run official Catholic schools, a congregation in Havana quietly offers alternative after-school courses focusing on the arts. Parents, who learn about the program by word of mouth or church bulletins, tell the sisters they’d prefer the classes focus on math and science rather than guitar lessons, theater and painting.

But one project in particular highlighted the merits of the artistic assignments.

“We asked the kids to draw someone who loves them very much, thinking they’d draw their mothers, their grandparents, someone from their home,” one sister said. “Instead, they drew Fidel.”

Fidel Castro led the Cuban Revolution and took power in 1959, implementing a communist agenda and depending on the Soviet Union for financial support until its fall in 1991. He was a dictator until 2006, when his health deteriorated and he ceded power to his brother Raul, who stepped down April 19. Fidel Castro died in 2016.

At school it was “drilled into them that Fidel loves them very much,” the sister said. “That’s the benefit of teaching the arts: You’re teaching them to think for themselves, to develop independently.”

The sister’s after-school program — not illegal, but managed quietly and with careful language — is one of many programs throughout the island where Catholic sisters and organizations shore up social services otherwise lacking because of the struggle Cuba’s economy faces from the chill in relations with the United States. More than 75 percent of Cuban households earn less than $1,000 per year, according to the Boston Consulting Group, and 90 percent of Cubans use food rations, which cover basics such as flour and vegetable oil. Shortages occur often.

Through work by the sisters and other programs, the Catholic Church in Cuba extends its reach beyond parishes and strengthens ties with donors, often Cuban exiles in the United States and elsewhere.

As the Soviet Union broke up and support to Cuba stopped in the 1990s, the country entered an economic crisis, and the government realized it needed help, said Archbishop Thomas G. Wenski of Miami. More than a third of Miami’s population is from Cuba.

“Communism is the ultimate ‘big daddy’ state: They take care of everybody’s needs,” he said. “To recognize that a church or somebody else can provide social assistance was a bitter pill for the communists to swallow.”

Following decades of repression, the Catholic Church in Cuba has been rebuilding in the last 20 years. Visits from the last three popes have helped the church’s standing with the government and the Cuban people, maintaining the Vatican’s stance against the 1962 U.S. embargo of Cuba, which covered all economic, commercial and financial exports except for medicine and some foods. While U.S.-Cuba relations briefly warmed in 2015 under President Barack Obama, the Trump administration once again tightened sanctions.

Care is taken to not draw attention from government officials lest there be repercussions. Fear of the government, which discourages publicity on how the church or organizations step in where the state falls short, manifested itself throughout conversations Global Sisters Report had in various parts of Cuba, with subjects requesting anonymity for both themselves and the centers where they work. 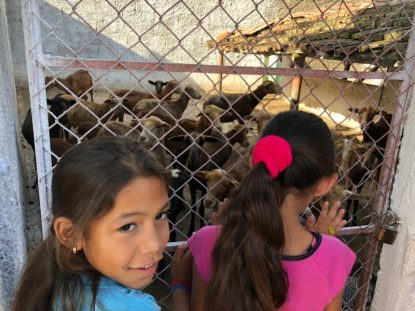 “Publicity is bad because we’re not the ones who are at risk,” said one sister who works at a government-run home for people who are disabled that depends on the presence of her congregation. “The patients are the ones who suffer the consequences.”

Repercussions for drawing too much attention to social services that the church provides may range in severity — a program can be closed, supplies not delivered or managers questioned and intimidated by government officials — so all are artful in the language they use to describe their programs. Still, some church-sponsored programs are well-known and successful in the cities, without interference from the government.

As one Cuban American academic said, “The church in Cuba is mostly there with and for the people, to lift them up, because a lot of people who are suffering do not have family in the outside” who can help them.

Elderly people who do not have family and can only rely on their meager government-provided retirement, he continued, might depend on church-sponsored dining halls, where they can eat breakfast and another hot meal a day. People who need affordable medicine also often turn to the church, which collects donations from parishioners and Cubans who have left the country.

In Santa Clara, about 175 miles east of Havana, the Franciscan Capuchin sisters run a day-care center for about 60 children between the ages of 2 and 5.

While the sisters are not allowed to teach the children, their presence is a form of educating, one sister said.

“There’s no possibility for the church to do any kind of formal education,” said Father Alberto Garcia, a Cuban American spiritual counselor at Belen Jesuit Preparatory School in Miami. “But the church has been able to offer a number of educational programs in different centers,” such as parish programs “helping kids with their homework, support to parents, programs of human values formation, language courses, computer stuff ….”

In the government-run home for people who are disabled, sisters serve as the eyes and hands of the operation, a visible example of how the state depends on religious services. Most of the 180 adults who live in this home are unable to communicate verbally or eat independently. Some use wheelchairs. Their parents either couldn’t afford to take care of them when they were children or were unable to.

Before the 1959 revolution, the sisters ran a school in that building. Once Catholic-run institutions were forced to shut down and the state took over the building, the government started bringing in people who were handicapped for the sisters to look after. But managing the place without officially running it, one sister said, is difficult.

All 27 staff members are employees of the state, with five sisters and three postulants in the home.

“The question is not to impose, but to teach, to try to value the human in the patient,” said one of the sisters.

Caritas, the church’s network of charitable agencies, extends the church’s reach to the larger community by filling gaps in social services throughout the island. Financial support is provided through Boston-based Friends of Caritas Cubana.

In Cuba, support from Caritas also trickles to individual volunteers.

Lidia Rivera, a laywoman from Santa Clara, set her attention in 1998 on Jorobada, a farm town less than 20 miles south of her home. With help from Caritas, Rivera’s work became a source of survival for this community of bean- and plantain-planters, especially after Hurricane Irma last September.

After almost 50 days of no electricity or running water in Jorobada, Rivera dug a well with the help of the local church and Caritas. As a retired doctor, she also helps provide basic health care, such as treating parasitic infections.

“We have no words for how Lidia has helped us,” one resident said. “She’s given her life, love and soul to this community.”

Rivera said the purpose of her work in Jorobada “is only religious, and charity is a dimension of the evangelizing process.”

A big improvement for that community was the community center, once a hut that has been renovated into a chapel, sacristy, kitchen and dining hall for the elderly, laundry facility, and a spare bedroom for when the priest sleeps over. Pens for rabbits, goats and pigs are interspersed around the center.

The Marists used to have Catholic schools in the area, and their graduates regularly volunteer as tutors.

In the vibrant colonial town of Trinidad, two sisters live in a spacious home that’s been transformed to accommodate up to 20 girls from nearby rural communities. They come to the city for education, staying with the sisters on weekdays at practically no charge and returning to their families on the weekends.

“The idea is that we give them an integral Christian formation,” said one of the sisters, who’s been running the home for five years.

“We try for them to live well and know God, that God loves them, so that, in the future, they can be the protagonists in their lives and defend themselves head-on,” she said.

The sisters are familiar faces in the rural areas, visiting often to celebrate sacraments — baptisms, first Communions, confirmations — and they take these opportunities to observe how families are doing and which girls are in the most precarious situations. Far from the city mentality, one sister said, rural life can encourage early pregnancies, and some girls have three or four children while they are teenagers.

Before, the sisters took in girls between the ages of 18 and 21; now, the girls are 12 to 15 years old so the sisters can introduce positive influences in their lives sooner. “When they’re older, they can defend themselves better,” one sister said.

The diocese and the sisters’ congregation help finance boarding for the girls. Some have gone on to graduate from professional schools.

One girl arrived when she was still in elementary school, the younger end of the norm. She eventually joined their congregation — a favorite story of one of the sisters.

“We see the fruits of our work,” she said. “They see the work of sisters who touched their lives; it’s like a tiny hook. Of course, it isn’t for all the girls. But them seeing our work and our influence and becoming curious and interested for themselves … it’s a testimony to our presence here.”

PREVIOUS: Murdered Hungarian youth pastor to be beatified as martyr