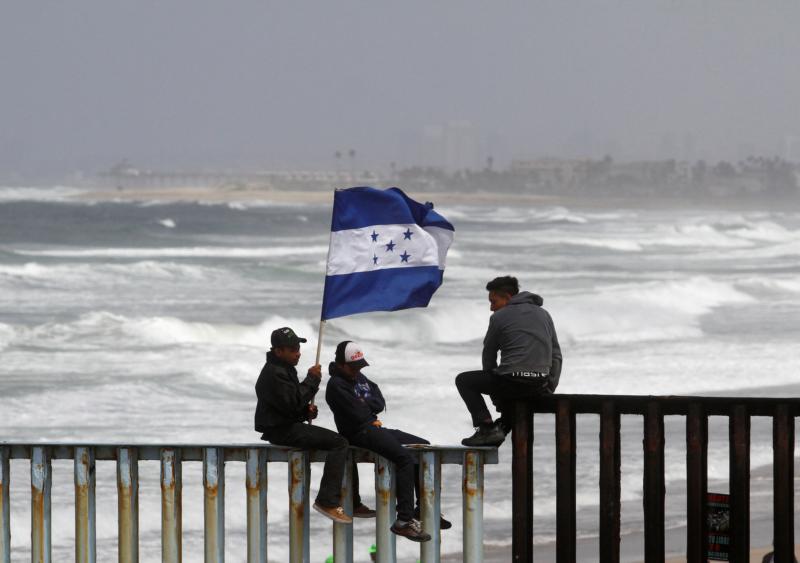 People hold a Honduran flag while sitting on the border fence between Mexico and the United States in Tijuana, Mexico, April 29. The Trump administration was set to decide in early May whether Honduran holders of a special immigration status will be able to remain legally in the country. (CNS photo/Jorge Duenes, Reuters)

WASHINGTON (CNS) — The Trump administration was set to decide in early May whether Honduran holders of a special immigration status will be able to remain legally in the country.

The decision could affect up to 57,000 Hondurans who are protected under the Temporary Protected Status program, popularly known as TPS. The status has over the years granted a work permit and a reprieve from deportation to certain people whose countries have experienced natural disasters, armed conflicts or other exceptional situations so they temporarily can remain in the United States.

During a May 1 press call organized by the Washington-based group America’s Voice Education Fund, Honduran TPS holder Orlando Lopez, of Miami, spoke of his experience and what’s at stake if he and his family are forced to return.

Honduras is one of three countries in Central America referred to as the Northern Triangle, and like the other two — El Salvador and Guatemala — has experienced a high level of violence that has driven many of its citizens northward seeking safety. But many like Lopez arrived in the U.S. following natural disasters such as Hurricane Mitch in 1998.

“I arrived 20 years ago as a result of Hurricane Mitch. We had to flee due to conditions that were worsened because of the storm,” he said. “I thank the U.S. for their cooperation and partnership with our country. We work hard and do not have criminal records. I own a home and business with my family and every year I pay my taxes.”

Lopez said he is “very worried,” because Honduras is not ready to welcome the thousands of displaced citizens.

“Not only would there be chaos caused here by this decision, but there would be an even worse burden placed on my country which is not able to receive us,” he said.

During the call, Patricia Montes, of Centro Presente, a Latin American immigrant group in Boston, said more than half of Hondurans in the country are living in extreme poverty, surviving on about a dollar per day.

“Obviously, Honduras is a country that is not ready to reabsorb people with TPS,” she said. “It is important for us to ask for an 18-month extension of TPS.”

But the future for TPS holders in the U.S. has been a bleak one under the Trump administration, which, one by one, has ended the program for El Salvador, Haiti, Nepal, Nicaragua and Sudan, even as it gave recipients a final window of time to remain and settle their affairs before returning. Even as those nations face threats, from struggling economies and violence, the administration said it has determined that it is safe for its citizens to return.

Hondurans in the U.S. are not the only ones who are worried.

Mayor John J. Bauters of Emeryville, California, who also joined in the press call, said that immigration has been an important factor in driving the economy of California’s Bay Area for the last two decades. That’s why organizations such as the U.S. Chamber of Commerce have opposed ending the status because of how it would affect the economies of certain U.S. cities and towns if members from those communities are forced to leave.

“They’ve been working here for a while, since 1998 after Hurricane Mitch,” he said. “Hopefully Trump will realize that his decision affects a lot of families and urban communities. Immigrants add to our local economy by working. Removing these residents from our communities would only serve to destabilize local economies across the nation.”

Those who are enrolled also present no danger to the U.S., he said.

“These are the people who are working and required to pass background checks every 18 months,” he said, adding that it also would be detrimental to both countries if they are forced to return.

“Honduras certainly cannot accept all these people coming back at this time and it would be embarrassing and demoralizing for us to send so many people back to a country that is in the midst of a humanitarian crisis,” he said.

“Strangers, families, and friends would have to piece together their lives after this decision is made. We believe the president should think critically what the impact of this decision will mean for communities across our country. There isn’t anything worse we could do right now than to remove a massive amount of people who are integral to the American economy and whose family ties and lives are connected primarily to the United States.”