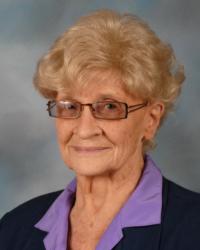 Sister Angela Miller is pictured in an undated photo. (CNS photo/courtesy Sisters, Servants of the Immaculate Heart of Mary)

BALTIMORE (CNS) — Sister Angela Miller, a member of the Sisters, Servants of the Immaculate Heart of Mary, is believed to have been murdered by her nephew on or before he set fire April 28 to the nun’s home in West Scranton, Pennsylvania, authorities said.

Rosemary Smith, Sister Angela’s sister and the mother of Alan Smith, was shot in the head and murdered by her son before he set the fire, according to a May 1 report in The Times-Tribune in Scranton. Alan Smith died in the blaze and officials ruled the death a suicide.

The Smiths lived on one side of a duplex home, while Sister Angela lived on the other, the newspaper reported.

Investigators searched the home for Sister Angela’s body, but failed to find it. They suspect that Sister Angela was murdered by Alan Smith sometime before he set the fire.

A search for her body was continuing May 2 after police identified what they believe could be blood in the trunk of Rosemary Smith’s car, The Times-Tribune reported.

Events unfolded as police arrived at the home to serve an emergency protection-from-abuse order and were met with a shotgun blast fired by Alan Smith after he set the fire, the newspaper reported.

Sister Angela served six years in the Archdiocese of Baltimore and associates recalled her as a fun-loving person.

Deacon Paul Mann, pastoral associate at St. Clare of Assisi Parish in Essex, Maryland, worked with Sister Angela, a popular middle-school teacher at St. Rita School in Dundalk, Maryland, from 1983 to 1986. She was also the co-moderator of the parish’s high school youth group.

“The kids loved her because she was the cool nun, the fun nun,” said Deacon Mann, who worked with the youth group with his wife Irene. “Most religious have the air of mystique about them. She would just be real.”

Father C. Lou Martin, pastor of Christ the King Parish in Glen Burnie, Maryland, was assigned to St. Rita Church when Sister Angela served there and remembered her as “the kind of person who would reach out to people on the fringe.”

“She was very energetic, just a go-get-it kind of person,” Father Martin said. “She could witness to her vocation.”

The Manns said Sister Angela was devoted to her family.

“She asked permission not to live in a convent (in Scranton) so she could take care of her parents,” Irene Mann said. “She stayed there after they died.”

In a May 1 statement, Sister Ellen Maroney, president of the Sisters, Servants of the Immaculate Heart of Mary, said the community was “deeply grieved at the horrific and heartbreaking situation which took the lives of our Sister Angela Miller; her sister, Rose Smith, our employee at the IHM Center for 17 years; and her son, Alan.”

Sister Ellen noted that for more than 15 years, the sisters have worked to raise awareness to the tragedy of domestic violence.

“We unite with all who refuse to be numbed by tragedy,” she said, “but instead use their grief energy to work for the fullness of compassion and justice.”

PREVIOUS: Rockford Diocese prepares for V Encuentro by thinking about the future

NEXT: Hondurans plead for extension of Temporary Protected Status