New Vatican document on economy given high marks in U.S. 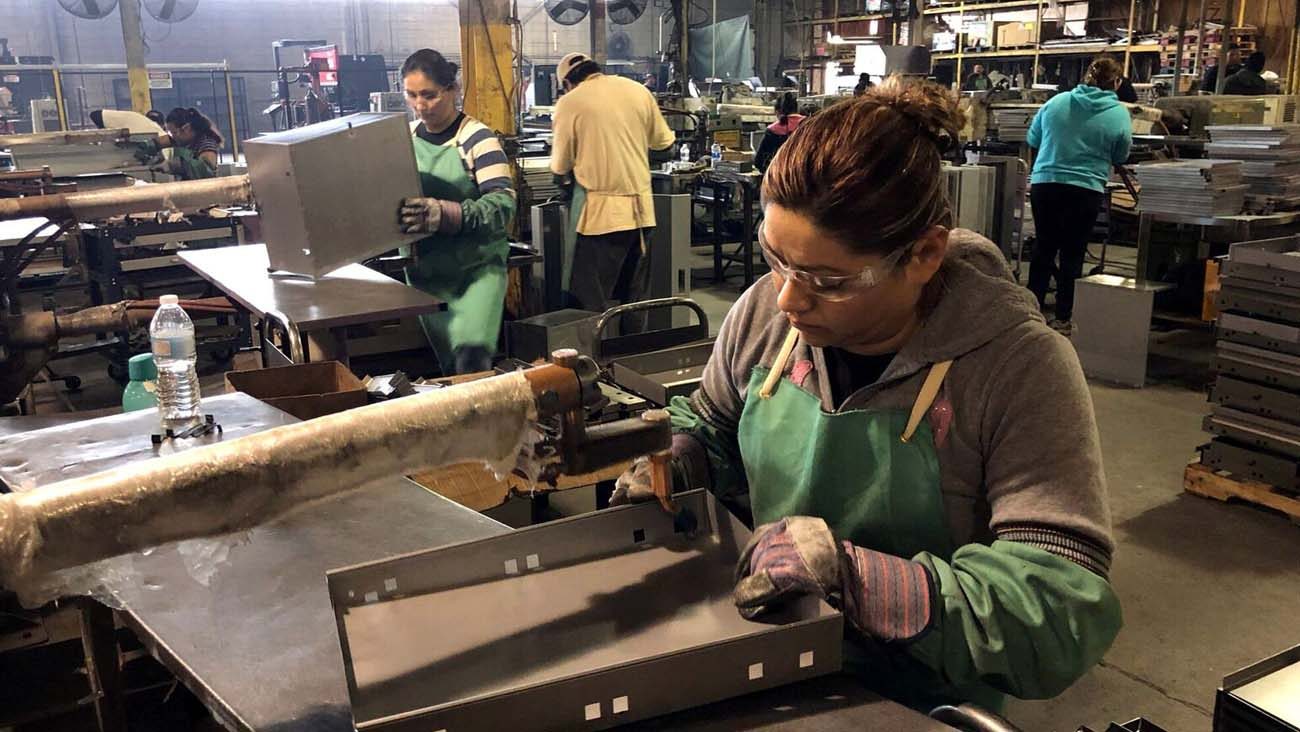 Workers weld drawers on the assembly line at Metal Box International toolbox factory in late in February in Franklin Park, Ill. A new Vatican document on the economy, which contains a strong emphasis on financial transactions and maneuvers, is getting a warm welcome among U.S. Catholics who observe the economic scene. (CNS photo/Timothy Aeppel, Reuters)

WASHINGTON (CNS) — A new Vatican document on the economy, which contains a strong emphasis on financial transactions and maneuvers, is getting a warm welcome among U.S. Catholics who observe the economic scene.

“I think they did OK,” said Father Seamus Finn, an Oblate of Mary Immaculate who is chairman of the board of the Interfaith Center on Corporate Responsibility and head of his order’s Justice, Peace and Integrity of Creation Office.

“I’m not surprised in the things that it comments on — shadow banking, offshoring — things we’ve been following very closely for the past 10 years,” Father Finn said. The world financial crisis, which was dubbed “the Great Recession” in the United States, made its first impact 10 years ago.

The document, dated Jan. 6 but issued May 17, is titled “Considerations for an Ethical Discernment Regarding Some Aspects of the Present Economic-Financial System.” It was a joint product of the Vatican Congregation for the Doctrine of the Faith and the Dicastery for Promoting Integral Human Development.

“These very specific items that are addressed are freely a call to a more ethical and maybe a more cautionary use of some of these instruments if we don’t know what the overall impact is going to be,” Father Finn said. “If we don’t know the fallout or the consequences of an action is going to be … be very careful or don’t use it.”

He added, “I think these instruments by themselves are not inherently destructive. They do perform a particular function in the financial system. It’s the people who are using them. They have to be careful and they have to know what they’re doing.”

William Bowman, dean of the Tim and Steph Busch School of Business and Economics at The Catholic University of America, Washington, also was grateful the Vatican drew a distinction between the financial mechanisms used and those who pull the levers.

“It’s extraordinarily well balanced without taking its focus off the fact that the private sector is there to serve the person and not vice versa,” Bowman said. “This particular document — in acknowledging the role that profit has to pay, that entrepreneurs have to play, makes these markets function well — notes all the pressures to concentrate power in the financial sector.”

The document takes a dim view of “the indiscriminate expansion of profits,” he said, adding, “No profit is in fact legitimate when it falls short of the objective of the integral promotion of the human person, the universal destination of goods and the preferential option for the poor.”

“The financial sector is becoming extraordinarily powerful relative to the national and supranational efforts of governments to regulate it,” Bowman said. “This battle is really dangerous for the economy.”

The document’s timing is important due to “this fear that financial markets are becoming too strong, and it’s impacting on the well-being of people,” he added. “It avoids the temptation of trashing free markets and business and capital. It says these things can be put at the service of man, or become oppressors.

“My sense right now is that’s it’s moving in the latter direction and it has to be pulled back. What is the regulatory framework (to do so)? If we completely go back to that after meeting with the Holy Father, I’d say, ‘Boy, he gets it. He really gets what it’s all about.'”

Father Finn told Catholic News Service he had heard a document was being prepared that would encompass many of Pope Francis’ thoughts on the global economy that he has uttered during his five-year pontificate.

“It gets rather technical in terms of financial issues and economic issues,” said Eric LeCompte, executive director of the Jubilee USA Network.

“It’s clear that the Vatican’s doing that twofold, because they do want to engage in the existing debate that’s taking place right now on these issues at the U.N., the International Monetary Fund and Congress,” LeCompte said. “Tax solutions are being debated that can prevent the next financial crisis. The Vatican is looking in a rather concerned light that we haven’t put in place any real framework to prevent the next financial crisis.”

The second part of LeCompte’s “twofold” analysis: “This situation impacts all of our lives like the oxygen that we breathe. People of faith, Catholics, should try to understand these issues. A stronger reiteration of what these policies are on resolving the debt crisis or the financial crisis.

“What’s surprising is the amount of time it spends on articulating his (the pope’s) current position on taxation,” he added. “The document spends more than two pages on that, looking at those particular issues.”

Asked for comment on the document, Legatus, an organization for Catholic business leaders, sent a statement by executive director Stephen Henley to CNS in an email. Henley said, “The need for Catholic witness in the field of business is ever-present, and today’s society relies on its business leaders to shape cultural and moral attitudes. Legatus takes this responsibility seriously, and since our founding, has sought to build ambassadors for Christ in the marketplace.”

NEXT: Vote on revised medical directives on tap at bishops’ spring assembly