Sex trafficking is ‘rooted in structure of society,’ says speaker 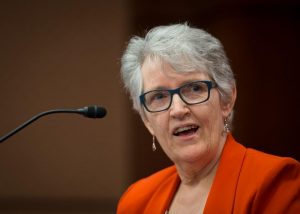 Good Shepherd Sister Winifred Doherty, who is her religious congregation’s U.N. representative, speaks about human trafficking at the U.S. Capitol in Washington May 15. (CNS photo/Tyler Orsburn)

WASHINGTON (CNS) — The fight against human trafficking and sexual exploitation may need its own #MeToo moment, according to a leading trafficking opponent.

Good Shepherd Sister Winifred Doherty, who is her religious congregation’s representative to the United Nations, observed that sex trafficking, “a debasement of the human person,” is “rooted in the structure of society, and more so today.”

The “social acceptance of the prostitution of women and girls” includes the benign label of sex worker. “Prostitution is neither sex nor work,” Sister Doherty told the inaugural Shine the Light conference at the U.S. Capitol May 15. If gender equality can be put into laws, traffickers could “no longer buy and sell people,” she said.

Conference speakers addressed both sexual and forced-labor exploitation in the United States. According to a recent report from the U.N. Office on Drugs and Crime, 79 percent of human trafficking worldwide involves sexual exploitation. It said 18 percent involves forced labor — promising desperate people steady high-paying jobs that don’t exist while forcing them into debt bondage and low-paying jobs.

That, Sister Doherty emphasized, can be going on in one’s neighborhood, and not be something far away. The next time women walk by a hair and nail salon using what appears to be immigrant labor, she said, it’s right to ask, “What’s happening in there? Who’s working in there?”

The Trafficking Victims Protection Act of 2000 was the first comprehensive federal law to address trafficking in persons, but more needs to be done, Sister Doherty said. She also is advocating for the decriminalization of women forced into prostitution.

The conference was co-hosted by the National Advocacy Center of the Sisters of the Good Shepherd with the District of Columbia Baptist Convention. Participants later met with congressional representatives to advocate for two pieces of legislation.

H.R. 4485, also known as Savanna’s Act, would standardize investigation procedures and build databases to strengthen the federal response to the growing number of missing and murdered Native American and Alaskan Native women. It is named for Savanna LaFontaine-Greywind, a 22-year old pregnant member of the Spirit Lake Tribe who was murdered last August.

In the Senate, the Protecting Girls’ Access to Education in Vulnerable Settings Act has been sponsored by Sen. Marco Rubio, R-Florida, to ensure children overseas who are displaced due to ongoing conflicts receive an education.

Two former prostitutes, now both outreach workers helped by Dawn’s Place, a residential rehabilitation center in Villanova, Pennsylvania, and operated by several Catholic religious orders, and at Covenant House Pennsylvania, a facility serving homeless people and refugees in the Philadelphia area, said therapy was key to rebuilding their shattered lives, but it requires a great deal time.

“For me, being in that program,” said the Dawn’s Place graduate, “basically they were teaching me to love me first. It took a whole year of trauma therapy to feel like a new person.”

In the United States, according to statistics provided by the conference, 17,000 children are trafficked for sex annually. That works out to 46 every day.

“Traffickers can sense (past sexual abuse),” said Angela Aufdemberge, president of Vista Maria, a social services organization in Dearborn Heights, Michigan. “The biggest need is to address maltreatment in homes, and regulating who our kids are communicating with on the internet.”

Luring girls, she observed, can be as simple as enticing them to send a nude photo via Snapchat, where photos disappear after being received. With a trafficker, of course, the photos always remain.

Her facility learned of one man “who had been contacting 100 children a day to entice them into sexual exploitation.”

“Survivors need a soft landing, where they can gather themselves,” Chester added.

NEXT: With confirmation before surgery, woman feels love of faith community