With confirmation before surgery, woman feels love of faith community 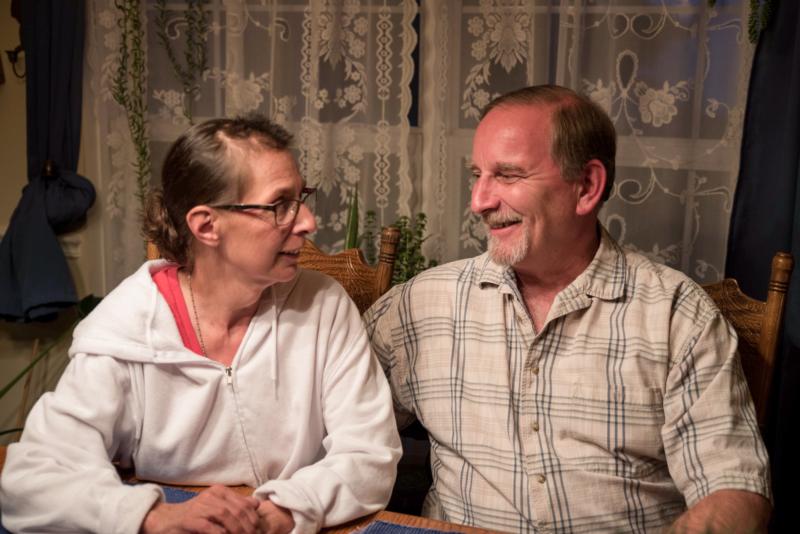 Jim and Kelly Heaton, pictured in a May 1 photo, had their newfound Catholic faith strengthened after Kelly underwent brain surgery to treat a sudden infection. The couple are parishioners at Holy Trinity Church in Gainesville, Va. (CNS photo/Zoey Maraist, Arlington Catholic Herald)

ARLINGTON, Va. (CNS) — It felt like a small miracle when Father Stefan P. Starzynski came to Kelly Heaton’s bedside and anointed her two hours before her brain surgery.

And it seemed unbelievable when her family learned one of her brain abscesses had disappeared.

Kelly was blessed by speedy recovery and diligent doctors. But she feels the greatest gift is that she found the Catholic faith before her illness.

“Had I not had the Catholic family, I don’t think I’d be here,” she said. “That was a true miracle.”

Kelly, a parishioner of Holy Trinity Church in Gainesville, was raised Presbyterian. Her husband, Jim, was raised Catholic. When the couple wanted to get married in the six weeks before Jim joined the U.S. Army, his church said no, as the Catholic Church requires at least six months for marriage preparation.

So they were married at Kelly’s church in Nebraska in 1984. The experience, coupled with the clergy sex abuse scandal years later, made Jim distance himself from his Catholic faith.

“I didn’t want any part of it,” he told the Arlington Catholic Herald, newspaper of the Diocese of Arlington.

For many years, they moved around the world with their three girls while Jim was in the Army Judge Advocate General’s Corps. In 2007, they moved to Virginia where Jim now works as a civilian lawyer at Fort Belvoir.

Though they attended Holy Trinity occasionally, it was their youngest daughter, Jennifer, who truly brought them to the Catholic faith.

“Out on the deck one day, she came and said, ‘Mom. I think I know what we’re going to be. I think we need to be Catholic.’ And I said, ‘Yeah, we do.’ I think God convicted both of us on the deck that day,” said Kelly, tearfully.

They began to attend Rite of Christian Initiation of Adult classes at Holy Trinity. Kelly and Jim started the process of having their marriage validated. “I knew this is where I needed to be,” said Kelly.

In early February, Kelly began to experience flu-like symptoms. But when they went to the hospital, the doctors said she had brain swelling and transferred her to Inova Fairfax Hospital’s Neuroscience Intensive Care Unit.

“Kelly had two abscesses, or infection spots, on her brain, one large and one small, and the small one was very close to the ventricle, which they call the motor of the brain,” explained Jim.

“The brain surgeon said if the small abscess got into the ventricle, Kelly would die or be permanently disabled. Initially, they planned to target the abscesses with antibiotic shots rather than surgery,” Jim said. But then her condition worsened and they opted for surgery.

During this time, Kelly was in and out of consciousness, though she never fell into a coma.

“I bleeped in and out, sleeping all the time and when I wasn’t sleeping, I just prayed my rosary,” said Kelly. “I was so happy that I was a Catholic.”

“I never had met Father Stefan before, but he did what I call a ‘drive-by’ confirmation, completing the process to confirm Kelly, plus he absolved her sins, and gave her the anointing of the sick,” said Jim. “Kelly was comatose and remembers none of it. I was in tears — all of us were in tears.”

The last MRI before she went into surgery showed the smaller abscess had disappeared, and the doctor feared it had ruptured, or traveled into the ventricle. The surgeon successfully removed the larger abscess, and never found the smaller one.

“We credit the Lord and Father Stefan for saving Kelly’s life,” said Jim.

In recovery, Kelly had to learn to walk and talk again. But she healed faster than expected, and today is at almost full strength. “We call her the Miracle Mama,” said Jim.

At the end of March, Kelly was overwhelmed with joy when she was able to see her daughter baptized and confirmed at the Easter Vigil. “I was so happy,” said Kelly.

The Heatons look forward to receiving the sacraments after their marriage is blessed.

“I told Father Starzynski I want one of those blanket absolutions like you gave Kelly because it’s been about 30 years,” said Jim. “Both he and Father Vander Woude said not a chance.”

Kelly’s health crisis was a difficult time for their whole family, but it was full of blessings, she said. “The whole ordeal strengthened our faith,” said Jim.

NEXT: With faith as connecting force, Hispanics get ready to enrich U.S. church