Speaker: U.S. should recognize past flaws on religious freedom 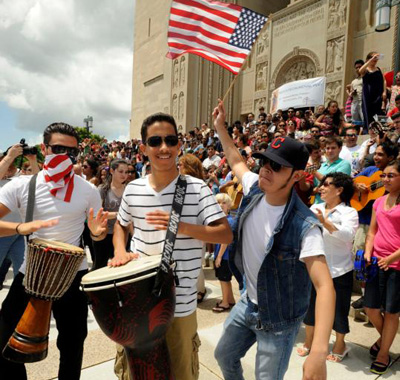 People rally for religious freedom outside the Basilica of the National Shrine of the Immaculate Conception in Washington in this 2013 file photo. (CNS photo/Leslie E. Kossoff)

WASHINGTON (CNS) — It is time for the United States to take a “self-critical” look at how it has treated religious freedom issues among its own leaders, said one speaker at a May 8 policy briefing near the Capitol with the new U.S. ambassador at large for international religious freedom, Sam Brownback, in attendance.

“We need to be more self-critical. We have to acknowledge that we, too, have problems,” said Anuttama Dasa, international director of communications for the International Society for Krishna Consciousness.

While “not as prevalent as other parts of the world,” Dasa said, “we have our share of religious extremists who misuse and misquote” in the United States. Moreover, he added, “we’ve had a history of backing bad guys — and some very bad guys.”

Dasa made his remarks during at the briefing, titled “The Global Crisis in Religious Freedom: State of Play and Recommendations,” sponsored by the Religious Freedom Institute and held at one of the House office buildings adjoining the Capitol.

A member of the institute’s advisory board, Dasa charged, “We provide arms, then we look the other way. We overlooked religious abuses for years, if not decades.”

Dasa said religious freedom advocates must “check the principle that we’re not acting on expediency, not being a blind advocate.”

Historic injustices have not been forgotten, including “the missionaries that were coming as Christians tried to diminish and crush the indigenous peoples” of the Western Hemisphere, Dasa said. “Whatever ethical standards we may have today,” he added, weren’t in place 500 years ago. One outgrowth of that is that “Christianity and Islam are in seen in some parts of the world as parts of an imperial culture,” according to Dasa.

Today, “we need to push our friends as well as our old foes,” Dasa said. “To a large extent, it was Saudi Arabian money that financed … the problem in Pakistan (with violent extremists). We know we need oil, but we need religious freedom, too. Some in this room would argue that we need it more.”

Brownback, in brief remarks during the conference, said some in policy circles “would rather keep religion out of foreign policy.” But “if you’re not looking for it, you don’t see it” when it comes to religious repression, he added.

Taking stock of the upcoming talks between the United States and North Korea over the latter’s nuclear weapons program, Nina Shea, director of the Hudson Institute’s Center for Religious Freedom, said of North Korea: “Once it had a large Christian population. … There will soon be negotiations for defense and also for trade for North Korea. The U.S. should add a third factor: respect for human rights.”

Shea lamented “a renewed crackdown in China” against believers, adding, “Special attention needs to be given to the Middle East, where the first genocide was declared by the government since 2004” with Islamic State’s actions against non-Muslims and Muslim non-adherents to its brand of Islam. In Iraq, where there 1.4 million Christians in 2004, Shea said, “today there are fewer than 200,000 left there.”

Religious Freedom Institute director Thomas Farr said some believe that “If you don’t offer Iraq’s religious minorities an incentive to come back, you’re effectively cutting off pluralism,” an offer that “could also apply to Shia Muslims” in the Sunni Muslim-majority nation.