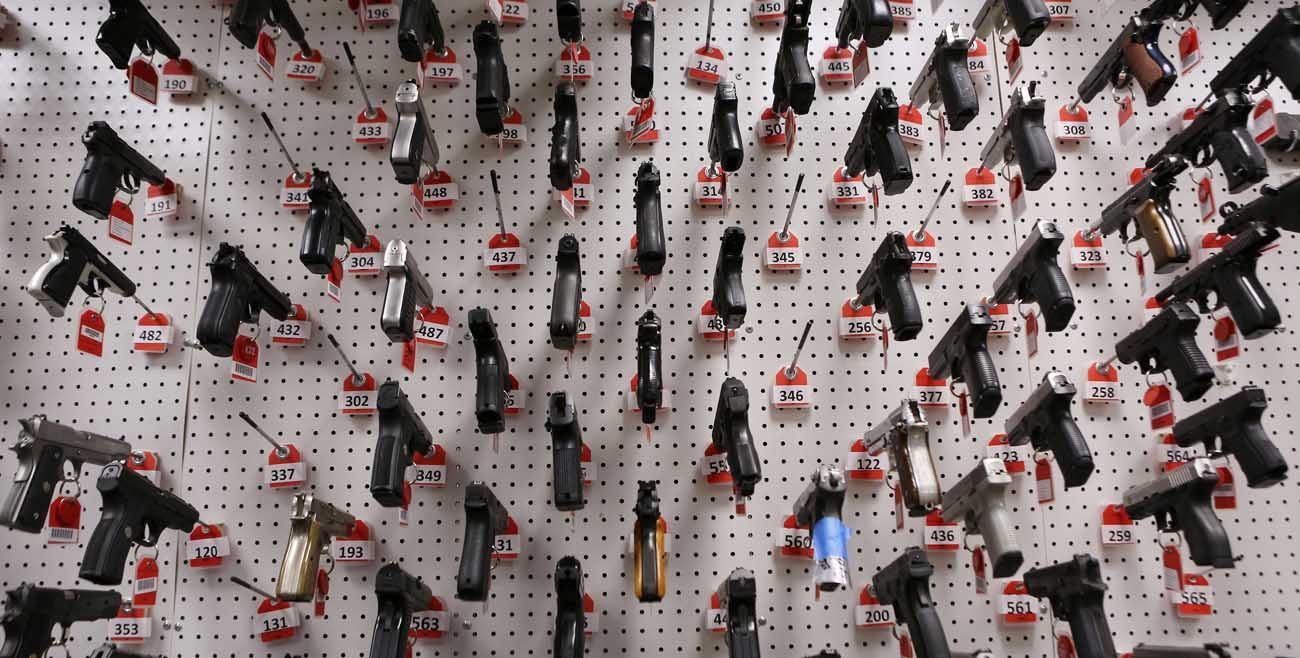 Handguns are seen in this 2013 file photo at the Bureau of Alcohol, Tobacco and Firearms National Laboratory Center in Beltsville, Md. (CNS photo/Gary Cameron, Reuters)

The Interfaith Center on Corporate Responsibility in a news release said such support for the initiative sends “a strong message to Sturm Ruger’s board that business as usual is insufficient given the current climate and that new safety standards responding to the risks guns pose for society are needed.”

The center said that “recent acts of public violence,” like the Parkland, Florida, school shooting, have resulted in “mounting public attention to the role played by military, assault-style weapons” in such incidents.

Representatives of two of the New York-based center’s member groups filed the proposal: Colleen Scanlon of Catholic Health Initiatives, who was the lead filer, and Sister Judy Byron of the Sisters of the Holy Names of Jesus and Mary, who was the co-filer.

The center said its members purchased stock two years ago in gun manufacturers Sturm Ruger and American Outdoor Brands and gun retailer Dick’s Sporting Goods “with the intention of engaging the companies on ways to promote gun safety.”

At the Sturm Ruger shareholder meeting, Scanlon asked the board to describe actions the company is taking to design and manufacture safer guns and accessories.

“Although Sturm Ruger has in the past asserted its support of gun safety measures, we see no evidence of the company’s efforts to produce safer gun products for use by the public,” she said.

“We believe the board has a responsibility to implement policies and practices that will safeguard the lives of its customers and, more broadly, society,” said Sister Byron. “Too many lives have been lost to gun violence for the manufacturers of these products to wash their hands of their responsibility in these events.”

The Interfaith Center on Corporate Responsibility said the shareholder vote at the Prescott meeting also was “a signal of growing unease amid calls for investors to either engage constructively with gun companies on the topic of gun violence or divest portfolios of gun stocks.”

The center also noted that “after constructive dialogue” with Dick’s Sporting Goods, the company stopped selling “assault-style weapons” and increased the minimum age required to purchase a gun.

Dick’s also has hired a Capitol Hill lobbyist to advocate for gun control at the federal level, leading many firearms manufacturers to cut ties with the company.

One of those companies, O.F. Mossberg & Sons Inc., said in a May 9 statement that as “a staunch supporter of the U.S. Constitution and our Second Amendment rights … we fully disagree with Dick’s Sporting Goods’ recent anti-Second Amendment actions.”

In Prescott, attendees at the Sturm Ruger stockholder meeting included the Rev. J. Michael Solberg, senior pastor at the Union Church of Hinsdale, Illinois. “Shareholder support for ICCR’s resolution is very encouraging, and shows the breadth of concern about gun violence,” he said in a statement.

Rev. Solberg called on Sturm Ruger to take its responsibilities “seriously for public safety to ensure future profitability. We encourage them to face these issues and be part of the solution.”

PREVIOUS: Catholics get chance to celebrate, think about Mary with new feast day

NEXT: Speaker: U.S. should recognize past flaws on religious freedom