States bordering Gulf of Mexico rank at, near bottom of new index 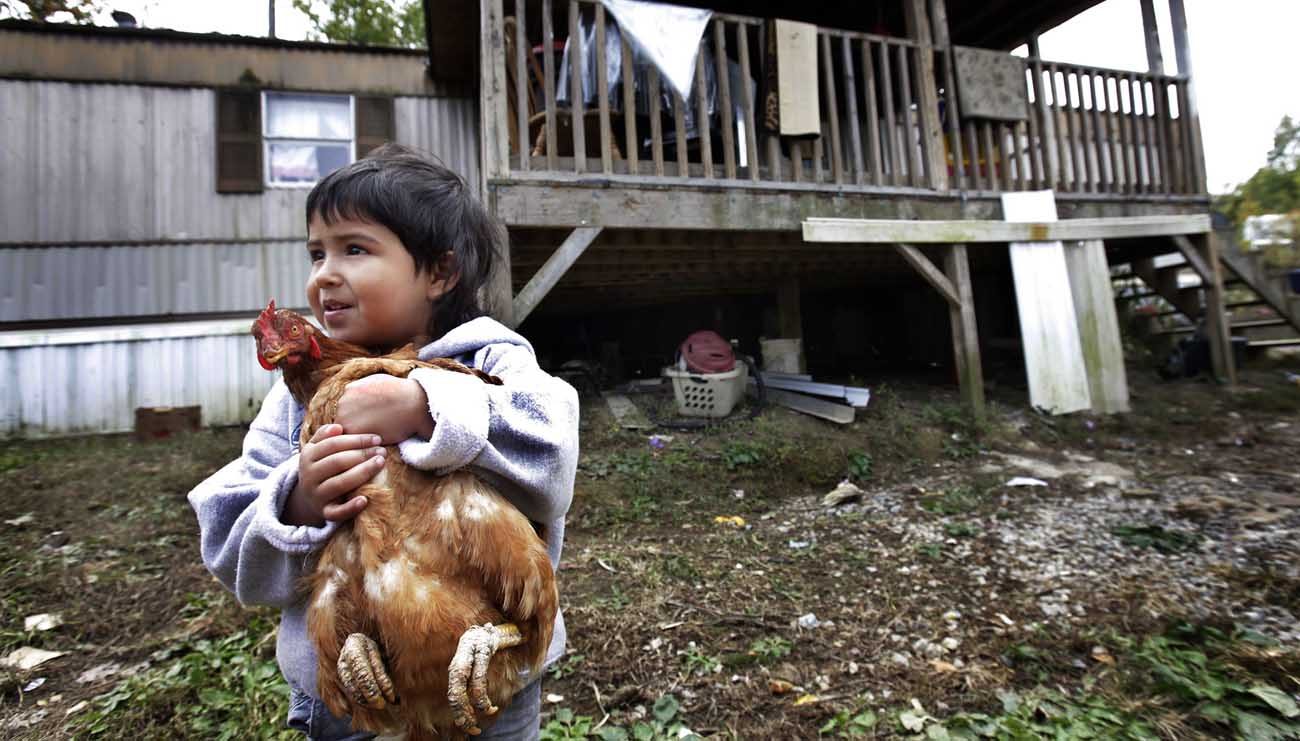 A boy holds a family chicken outside his home in Steele, Ala., in this 2013 file photo. (CNS photo/Karen Callaway, Catholic New World)

WASHINGTON (CNS) — Everything gets ranked these days, from burger joints to colleges. States are no different.

But the state of some states is quite different from their counterparts.

An area called the “Gulf South” — the five states bordering the Gulf of Mexico — rank at or near the bottom of the JustSouth Index issued by the Jesuit Social Research Institute at Loyola University New Orleans. Those states are Alabama, Florida, Louisiana, Mississippi and Texas.

The index, which debuted last year, looks at poverty, racial disparity and immigrant exclusion — areas that the study’s originators saw as important from the viewpoint of Catholic social teaching. The index looked at three aspects of each area before arriving at its rankings.

“Mississippi, Alabama, Louisiana and Texas earned spots in the bottom six rankings” overall, said the study, which was unveiled May 2 at the Capitol. This is an improvement over the first year of the rankings, when they were in the bottom four.

Florida, which had been 41st in the first index, moved up six spots to 35th. But the Sunshine State shouldn’t pat itself on the back quite yet; it finished dead last in poverty.

Jesuit Father Fred Kammer, director of the Jesuit Social Research Institute, said: “Sadly, the Gulf South states continue to lag far behind many others in promoting integral human development for their residents, even though there are some marginal changes in one indicator or another.”

Progress, though, need not be incremental or Sisyphus-like. From last year’s index to this year’s, big leaps were not impossible. Wyoming soared from 24th to second, while Alaska moved from 28th to seventh, and Wisconsin leapt from 33rd to 16th. Likewise, Connecticut dropped from fifth to 20th, Utah slid from 17th to 33rd, and South Dakota slumped from 15th to 43rd.

“The Gulf South has an unmistakable legacy of discrimination and marginalization toward people of color. The disproportionate advantages for white Americans in relation to persons of color in virtually every sphere of life illustrate the deep divisions that exist despite the passage of the Civil Rights Act and the election of the first African-American president,” the study said.

Father Kammer said May 2 the region’s legacy of slavery and racial discrimination contributes to unequal outcomes for whites and nonwhites.

Lane Windham, associate director of Georgetown University’s Kalmanovitz Initiative for Labor and the Working Poor, added the region “has the lowest union density” in the country. “People with union jobs make better wages,” she declared, noting the history of employers who have moved production to the nonunion South to avoid unions and to pay workers less.

Poverty remains a grinding, draining issue in the region. “In 1996, 68 of every 100 poor families received TANF (Temporary Assistance to Needy Families) benefits and in 2014, just 23 of every 100 poor families were receiving benefits,” the report said. “The maximum TANF monthly benefit for a single-parent family of three in Mississippi is $170 compared to $653 in Wisconsin and $789 in New York.”

The region also has fared poorly in adapting to growing numbers of immigrants.

“States in the Gulf South have experienced a significant influx of immigrants into their workforces in recent years and have not yet made adequate adjustments to their social, economic, and political systems in order to promote justice and dignity for immigrant residents,” the report said. “In addition, the Gulf South’s treatment of immigrants is colored by a history of discrimination against Hispanics and African-Americans.”

Immigrants face other forms of discrimination as well, according to the report. “In Texas, schools districts that have experienced an influx of students with limited English proficiency have had difficulty providing effective services to students because the school finance system does not take into consideration the true costs of providing quality language services to immigrant children,” it said.

“Some businesses will attempt to reduce costs by classifying immigrants as contract, temporary, or part-time workers to avoid offering benefits,” it continued. “Not only are these practices harmful to immigrant workers and families but also are not in the long-term interest of the employer, because workers who have health insurance are more present, productive and committed to their jobs.”

On another score, “public school segregation contributes to second-class schools where quality is low and resources are scarce. Additionally, gaps in employment and earnings stemming from racial and ethnic differences embody discriminatory practices and limit the economic opportunities of people of color to the benefit of their white neighbors,” the report said, noting that after federal supervision of public-school districts was eased, more minority students were educated in schools that were predominantly minority-majority.

While the index pointed out flaws in states’ practices, it also offered policy prescriptions.

States and school districts, it said, “should increase the share of resources allocated to schools serving a large percentage of minority students. Additional funding would allow those schools to attract and retain high-quality teachers, and provide critical support services for at-risk students.”

It added, “States can create incentive housing zones in which developers could request a project-based subsidy from the state for a specified number of affordable rental units developed within the zone.”

“The 2010 Patient Protection and Affordable Care Act provided an option for state leaders to expand the Medicaid program, largely funded with federal dollars, to provide coverage to the poorest persons in the state,” the report said. “Nineteen states, including four in the Gulf South region, have chosen not to do so.”

NEXT: Pope ‘most fearless man I ever met,’ says filmmaker Wenders