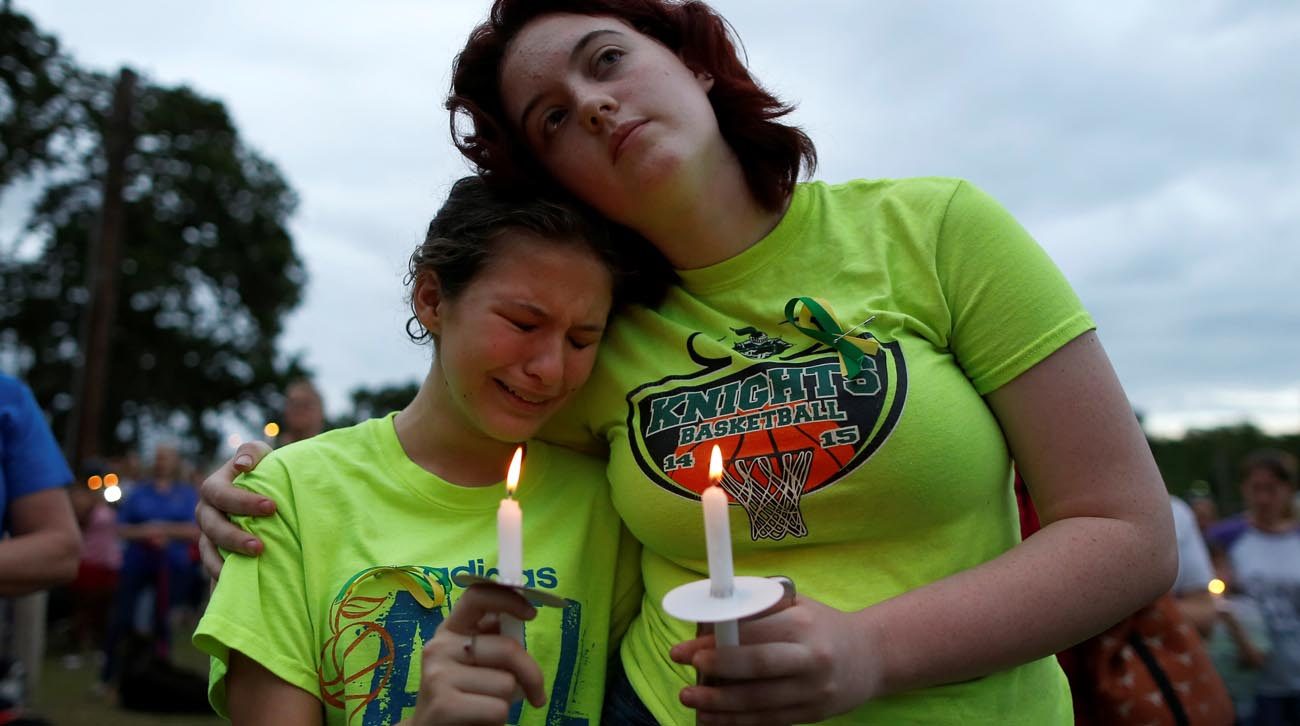 A young woman weeps during a vigil in memory of the victims killed in a shooting May 20 at Santa Fe High School in Texas. As more details emerged about the May 18 shooting that left 10 people dead and 13 injured at the Houston-area school, the student who authorities said confessed to the attack was being held in isolation May 19 as officials identified the victims. (CNS photo/Jonathan Bachman, Reuters)

UPDATED – HOUSTON (CNS) — In response to the May 18 school shooting at a Houston-area high school, Cardinal Daniel N. DiNardo of Galveston-Houston said the archdiocesan community would “unite to support and offer healing to those affected.”

“As a society, we must strive for a way to end such acts of senseless gun violence in our schools and communities,” he added in a May 18 statement.

The cardinal said he was “deeply saddened” and that his prayer and the prayers of Catholics in the archdiocese are with the “victims and families of those killed and injured in this horrific tragedy.”

In a separate statement as president of the U.S. Conference of Catholic Bishops, Cardinal DiNardo said: “Our community and our local church joins an ever-growing list of those impacted by the evil of gun violence. I extend my heartfelt prayers, along with my brother bishops, for all of those who have died, their families and friends, those who were injured, and for our local community.”

The school shooting, occurring just three months after the shooting in Parkland, Florida, took place when a male shooter opened fire at a Santa Fe High School the morning of May 18 killing 10 — eight students and two teachers — and injuring another 13 people.

A suspect taken into custody was identified as 17-year old Dimitrios Pagourtzis and another person of interest also was detained and questioned. Explosive devices also were found at the school and off campus.

At a late-afternoon hearing May 18 before a magistrate judge, Pagourtzis acknowledged that he understood the murder charges against him and was ordered held without bond. Authorities offered no motive for the shootings.

The shooting was the deadliest in Texas since a gunman attacked a rural church late last year, killing more than two dozen people.

“Sadly, I must yet again point out the obvious brokenness in our culture and society, such that children who went to school this morning to learn and teachers who went to inspire them will not come home,” Cardinal DiNardo said in his statement at USCCB president. “We as a nation must, here and now, say definitively: no more death!”

He prayed that “the Lord of life” would be “with us in our sorrow and show us how to honor the precious gift of life and live in peace.”

“We experienced an unthinkable tragedy at our high school this morning,” Santa Fe Superintendent Leigh Wall said in a message posted to Facebook.

“As soon as the alarms went off, everybody just started running outside,” 10th-grader Dakota Shrader told reporters, “and next thing you know everybody looks, and you hear boom, boom, boom, and I just ran as fast as I could to the nearest floor so I could hide, and I called my mom.”

Another student told CBS News he ran behind some trees, heard more shots, jumped a fence and ran to a car wash. He said he saw firefighters treat a girl who had a bandage around her knee and may have been shot.

Bishop Michael F. Burbidge of Arlington, Virginia, said in a May 18 tweet: “Please keep the victims of the Houston-area school shooting in your prayers. Pray also for their family members and friends who now begin a tragic grieving process. For those killed, grant eternal rest unto them, O Lord, and bestow grace and strength to all in their community.”

Texas Gov. Greg Abbott called the assault “one of the most heinous attacks that we’ve ever seen in the history of Texas schools.” He called for a statewide moment of silence the morning of May 21 and announced a series of roundtable discussions to be held about school safety and ending school shootings.

White cross with the names of those shot at the Santa Fe school have been put up along a memorial outside the school. Churchgoers offered prayers for the shooting victims at Sunday services May 20.