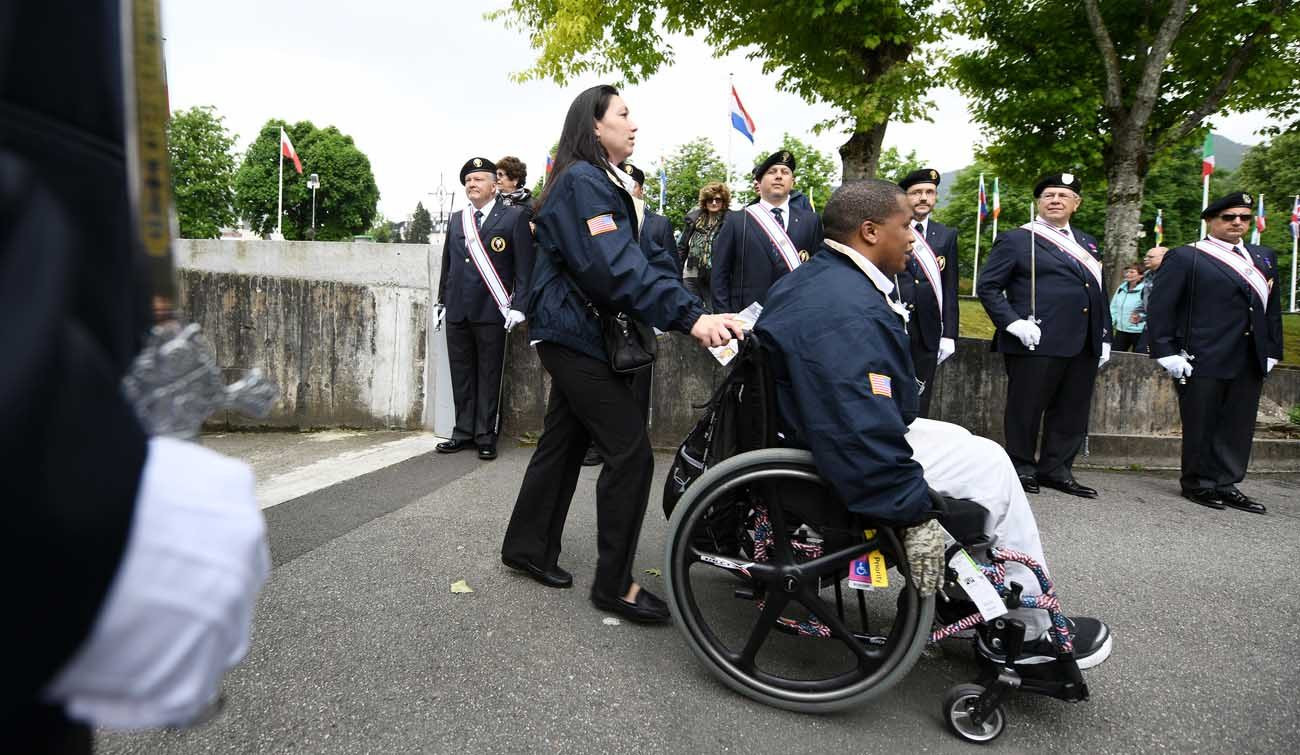 Maj. Jeremy Haynes is escorted in his wheelchair May 17 as he takes part in the International Military Pilgrimage in Lourdes, France. Haynes, a first-time spiritual pilgrim and Lourdes visitor, said he is a changed man since visiting the shrine, where Mary appeared to St. Bernadette Soubirous in a series of visions in 1858. (CNS photo/Tamino Petelinsek, courtesy Knights of Columbus)

Veterans taking part in the 2018 Warriors to Lourdes pilgrimage to France said the journey has positively influenced their lives and benefited those around them.

Maj. Jeremy Haynes, a first-time spiritual pilgrim and Lourdes visitor, said he is a changed man since visiting the shrine, where Mary appeared to St. Bernadette Soubirous in a series of visions in 1858.

“The trip has been life-changing for my wife and me,” Haynes told Catholic News Service. “With faith as our compass, we remain committed to moving forward.”

Haynes was shot four times in Afghanistan and sustained injuries that have left him struggling to overcome the physical constraints of paralysis. It has been a difficult journey. He also seeks healing for wounds in his family life that occurred prior to his physical injury.

“With a minimum emphasis on faith, my family life was a disaster and divorce was imminent. After being shot multiple times, I recall sinking into a dark place,” said Haynes. “Despite being a sinner, God showed mercy by sparing my life and allowing me to witness the birth of my son. Taking part in this spiritual journey has cleansed my soul and created a stronger connection with my wife.”

Haynes, who went on the Lourdes trip to seek healing “mentally, physically, spiritually, and emotionally,” said he was honored to visit Lourdes with military from around the world. The Warriors to Lourdes trip — sponsored by the Archdiocese for the Military Services and the Knights of Columbus — occurred in late May, during the 60th annual International Military Pilgrimage to the Marian shrine in France.

“We broke bread together, worshipped together, and promoted peace together. Although we speak different languages, faith connected us,” Haynes said. “I experienced the power of prayer as being a universal language that led me to encounter awesome individuals.”

The Rev. Steven Rindahl, an Anglican priest and U.S. Army veteran, took part in the pilgrimage and said he believed the journey benefited all who participated in it.

“There have been people who have been touched in so many different ways. It would be difficult to make a list to encompass all the different blessings people have received while they’ve been here,” said Rev. Rindahl, a retired U.S. Army chaplain who has served in duty stations in many states, including Texas, New York and Georgia.

Rev. Rindahl, who has ministered to active-duty soldiers and veterans, has worked with veterans afflicted by post-traumatic stress disorder as an “extensive piece” of his total ministry. In addition to emotional stress, people exposed to combat often suffer from a condition he refers to as “moral injury,” which he describes as a conflicted conscience resulting from complex or traumatic wartime experiences.

“War is an unnatural thing. They get this sense of guilt or shame,” said Rev. Rindahl, who believes this condition can be treated successfully with a faith response, particularly the sacrament of reconciliation.

“The great thing about Lourdes is that it is a known place for healing. Regardless of what your injury is — whether it’s physical, emotional or damage to your soul — when a person says, ‘I want to go to Lourdes,’ they’re going specifically with a heart and mind open to receiving God’s grace and what God has in store for them,” said Rev. Rindahl.

Retired U.S. Army Capt. Gary M. Rose said the 2018 Lourdes journey helped a friend recently suffering from severe PTSD connected with “a very bad, horrible battle” that happened in 1966. Rose said there has been a “noticeable improvement in his demeanor” since their return.

“Every single person that I know that went on that trip has come back much better than they were when they left for Lourdes,” said Rose, a Catholic. “Even me — I feel a lot better. My outlook is far better than it was a week or 10 days ago.”

Rose said while visiting the shrine he was often asked by others whether he believed the Mary was present.

“I got asked, ‘Do you think Mary is here?’ I don’t know. I can’t personally say, ‘Mary is here,” said Rose. “But I can personally say that there is some entity in the Lourdes shrine area that spreads nothing but good and seems to improve the demeanor and the psychological aspects of everybody that I associated with that went to Lourdes with me last week.”

Haynes said he is extremely grateful to all those who sponsored the opportunity and who volunteered at it — and also expressed a special thanks to organizers for allowing his wife to take part in the journey with him.

“Thank you for equipping me with the tools to become a better God-fearing man, husband, father, and citizen,” said Haynes.