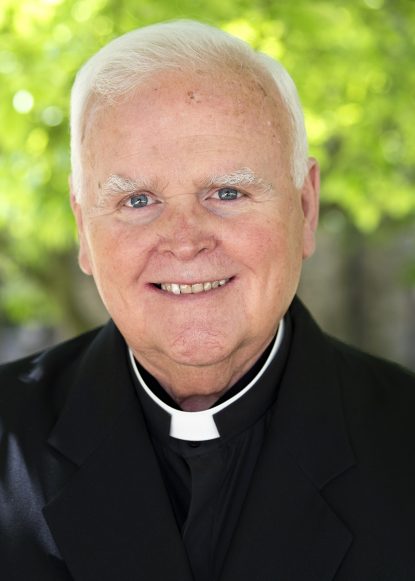 Most recently, he completed a term as provincial superior of the Eastern Province of the Congregation of the Mission, as the Vincentians are formally known, with his offices on the shrine campus.

As the shrine director he succeeds Father William O’Brien, who is retiring.

Going all the way back to Father Carroll’s childhood in St. Raymond of Penafort Parish, as the third of the five children of James and Gladys Carroll, he well remembers regularly accompanying his mother and his siblings to the weekly novena at the Miraculous Medal Shrine.

Another major influence on his vocation to the Congregation of the Mission was his uncle, the late Father James Caine, also a Vincentian priest. He entered the Vincentian novitiate in 1970, two years after his graduation from Bishop McDevitt High School.

He received his bachelor’s degree in philosophy from Niagara University and master’s degrees from Mary Immaculate Seminary in Northampton and Loyola University in Chicago.

Over the years he had a number of assignments including school minister at Archbishop Wood High School and 16 years at St. John’s University in Queens, New York, where he worked mostly in campus ministry and for the university’s Rome campus as well as executive vice president for student services.

He was elected provincial superior for the Eastern Province in 2008 and served in that post until the election of Father Stephen Grozio last year.

The Miraculous Medal traces back to a design revealed to St. Catherine Laboure, a young member of the Daughters of Charity, in 1830 by the Blessed Virgin, who promised all who wore it would receive many blessings.

Philadelphia’s Central Association of the Miraculous Medal was founded in 1930 by Vincentian Father Joseph Skelly, who was introduced to the devotion as small child by his mother.

Now Father Carroll, who also was introduced to the devotion by his mother, is the latest director of the Central Association.

“The Blessed Mother gave the Miraculous Medal to St. Catherine Laboure and the task of promoting the Medal was given to the Vincentian Fathers,” he said. “It was the wisdom of CAMM’s founder, Father Joseph P. Skelly, to invite men and women who knew the promise of the medal to become promoters.

“My hope as director is to share the promise and the gift of the Miraculous Medal to as many people as possible. This can be done with the support and help of our promoters.”

The message of the Miraculous Medal, he said, “is hope. Share your needs with Mary and she will present them to her Son. God will share his grace with you. Come to the altar.”

Now his great joy is to be permitted to do that at the very shrine where his own faith was nurtured as child through devotion to the Blessed Mother, instilled in him by his own mother.

For more information on the Central Association of the Miraculous Medal see MiraculousMedal.org.

PREVIOUS: Music stirred his heart, led him to cusp of priesthood