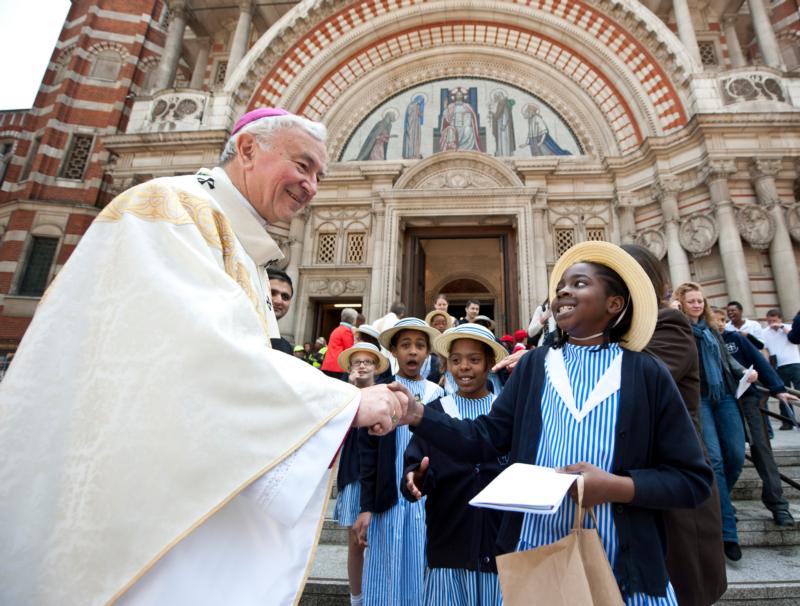 Archbishop Malcolm McMahon of Liverpool, chairman of the Department for Education of the Bishops’ Conference of England and Wales, said the government had sided with a “vocal minority of campaigners who oppose the existence of church schools.”

Bishop Mark Davies of Shrewsbury said the policy, announced May 11 by Damian Hinds, the secretary of state for education, indicated that secularist ideology was trumping the rights of Christian parents to educate their children in their faith.

The bishops had repeatedly asked the government to scrap its controversial 50 percent cap on the intake of Catholic pupils in any new “free schools” established outside of the control of local authorities, or councils. The bishops argued that they could not canonically support a Catholic school that refused to accept a Catholic child simply because he or she was Catholic.

A free school is a nonprofit, independent, state-funded school that is not wholly controlled by a local authority. Although the schools are free to attend, the name is not related to school fees.

In her platform for the 2017 general election, British Prime Minister Theresa May promised to abolish the cap, introduced eight years ago by her predecessor, David Cameron.

Given her assurances, the bishops expected Hinds, a Catholic who went to school in the Diocese of Shrewsbury, to remove the cap.

But Hinds told BBC Radio 4 in a May 11 interview that after he “reflected long and hard,” he had concluded that it was “right that we continue to have that cap.”

Archbishop McMahon responded by accusing the government of breaking its promise and of dropping the pledge it had made “to our country’s 6 million Catholics.”

He said the government had “ignored the tens of thousands of Catholics who campaigned on this issue” in favor of arguments advanced by a secularist minority who claimed that social cohesion was wounded by the existence of faith schools.

“Catholic schools are popular with parents of all faiths, ethnicities and backgrounds. Despite this we will remain barred from participating in the free-school program,” Archbishop McMahon said in a May 11 statement posted on the website of the Catholic Education Service, an agency of the bishops’ conference.

He continued: “The Catholic Church has had a long and positive relationship with the state in the provision of education, and we see today’s decision as a regressive step in this historic partnership.”

Preaching at a Mass for the national meeting of the Catenian Association in Telford May 13, Bishop Davies repeated the archbishop’s analysis that the government was capitulating to secularist lobbyists.

“It is a decision which is not merely a betrayal of a manifesto pledge or the promises made to the Catholic community, it represents a deeper shift in attitude across the whole political spectrum, where the rights and choices of Christian parents in raising their own families are made subservient to an ideology,” he said.

“We know church schools represent the fullest ethnic diversity and contribute enormously by their values to social cohesion,” he continued. “It appears to be an ideological understanding of ‘diversity’ which has seen the church barred from a particular field of education in spite of the facts.”

Bishop Davies added: “This was a very definite defeat for Catholic education and more specifically the aspiration of parents seeking a Catholic education for their children. … It is a defeat from which an ominous lesson can be drawn of how a government can acquiesce with a small and largely secularist lobby to undermine the freedom in which Christians can live and educate their children.”

The Catholic Education Service has worked repeatedly to demonstrate that the 2,142 Catholic schools in England and Wales are among the most diverse in the country, with the majority serving less affluent families within the state sector and drawing about 36 percent of students from ethnic minority backgrounds.

The Department for Education explained in a statement on its website that the church will be able to open schools without limits on the intake of Catholic pupils, but they will be outside of the free school system and will be under the control of local authorities.

“The department will work with local authorities to create these schools where they are needed, subject to a 10 percent contribution from the provider to the capital costs,” the May 11 statement said.

“To support the measures to promote social cohesion announced in the integrated communities strategy, these schools — as all schools do — will continue to be expected to play an active role in their communities,” it said. “This could include twinning with other schools and ensuring diversity on the governing board.”

But Andrew Copson, the chief executive of Humanists U.K., one of the groups opposed to state-funded Catholic schools, criticized the plan.

“The reality is that the government has lost the argument on this one,” he said in May 11 statement on the Humanists U.K. website.

“The majority of the public and a huge range of civil society organizations came together with us to oppose the lifting of limits on discrimination for new religious free schools. The mainstream view is now against state-funded selective faith schools,” he said.

“Today’s dirty little workaround is simply the government attempting to appease religious hierarchs against the better interests of cohesion, integration, and fairness,” he added.

PREVIOUS: Some Irish believe lives were saved by country’s prohibition on abortion

NEXT: Vatican updates pope’s schedule for visit to Geneva