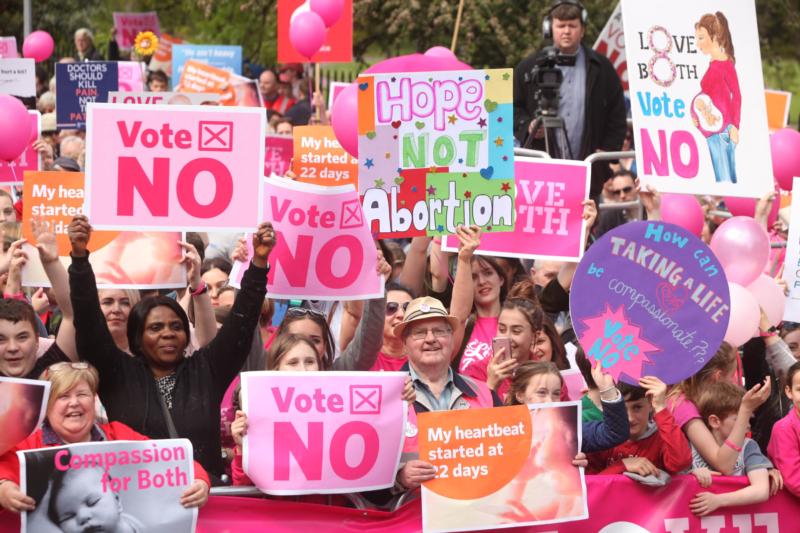 DUBLIN (CNS) — In the last major pro-life rally ahead of Ireland’s May 25 referendum on whether to liberalize the country’s abortion laws, thousands gathered to say “no” to far-reaching proposals that could see abortion on demand up to 12 weeks, and even later in some cases.

In less than two weeks, people in Ireland will be asked if they wish to repeal Article 40.3.3 of the Constitution, known as the Eighth Amendment, which enshrined a ban on abortion in 1983 and gives equal right to life to the mother and the unborn child.

The Irish bishops have warned that if the Eighth Amendment is repealed, legislation the government plans to introduce would make Ireland one of the most liberal abortion regimes in Europe.

Among the speakers who addressed the weekend rally in the shadow of the Irish parliament on Dublin’s Merrion Square was Mary Kenny, 24, a single mother from Pallaskenry. She believes the Eighth Amendment saved her daughter’s life.

“Holly’s life literally hung in the balance in the early stages of pregnancy,” said Kenny, who became pregnant at age 19. “If it had been a matter of just driving down the road to the nearest abortion clinic or to my GP, almost certainly Holly would not be alive today.”

Instead, Kenny believes the near total ban on abortion in Ireland gave her time to think about her pregnancy and opt to keep her baby.

“My first thought was abortion. I looked up the British Pregnancy Advisory Service (BPAS) and decided that I would travel to England to end the life of my small baby,” she said. She would have been one of the 3,265 Irish women who annually make the trip across the Irish Sea to Britain for an abortion.

However, she discovered her passport was out of date, so she could not travel. 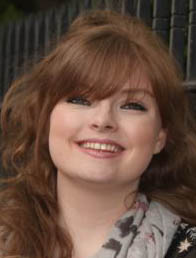 “I became frantic and I ordered abortion pills online,” she explained to Catholic News Service.

She broke down in front of a colleague. “I told her my feelings of hopelessness and (of) the pills that were on the way. She told me she would have given anything to have been able to become pregnant, because all her children were adopted. ‘You can do this,’ she said. At that moment, those small words of encouragement were all that I needed to hear.”

Holly arrived Nov. 19, 2013. Kenny continued with her college studies and has since secured a degree in technical communications and electronic learning at the University of Limerick.

Addressing the rally on May 12, Kenny said: “We know that at least 100,000 lives have been saved by the Eighth Amendment. We meet so many women that regret their abortions, but nobody regrets having their child.”

While polls indicate that the “yes” campaign to repeal the Eighth Amendment currently polls at 45 percent of voters, the gap between the two sides has been narrowing in recent weeks, with 34 percent saying “no” and 18 percent of voters still undecided. Nearly 4 percent gave no opinion. 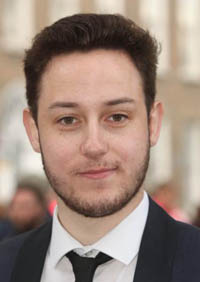 Gavin Boyne, 20, a student of philosophy at Trinity College Dublin, told CNS he is strongly opposed to a repeal of the Eighth Amendment, which he believes saved him from being aborted.

Warning that repealing the Eighth is stripping unborn babies of their humanity, Boyne said a “yes” vote would suggest that “choice and convenience take precedence over human life, and that is a very slippery slope to go down. We have seen cases in the past where a certain group of people has been dehumanized and anything then was permissible.”

On campus, he has found “a very strong ‘yes’ presence.” Many students are “very hostile and aggressive,” but he said he worries that “they have been fed soundbites, not facts.”

Someone else who knows the challenge of being pro-life on campus is 21-year-old Katie Ascough. She was impeached as University College Dublin’s Students Union president over her decision, following legal advice, to remove information from the student union handbook on procuring an abortion. 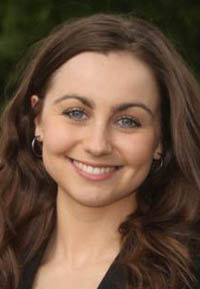 Ascough, a graduate in medicinal chemistry and chemical biology, told CNS, “My impeachment, if nothing else — it highlighted the issue of freedom of speech in our country, especially on college campuses.”

“We were told at that time that she was incompatible with life and that over 90 percent (of) children diagnosed with this don’t make to a year old. But Kathleen has defied all medical expectations, and she is still with us today at 11 years of age. She is our little miracle,” said Harkin, 43, of County Down.

Harkin is a member of the support group Every Life Counts, which assists parents whose children are diagnosed with a life-limiting condition. If the referendum passes, she believes the impact on children with a disability will be dramatic.

“Unborn children with special needs will be eradicated. It is heart-breaking for me, because I think special needs people bring so much to our families and our communities; they are a blessing. They teach us how to love and they bring out the best in us,” Harkin said.

“There will be huge pressure on parents if they get a diagnosis of disability. In Britain, 90 percent of babies with Down syndrome are aborted, and with no time limits. What does that say about the value of disabled people in our society? It is really worrying — we have got to prevent that happening.”

NEXT: Bishops decry U.K. refusal to remove cap on Catholics in ‘free schools’