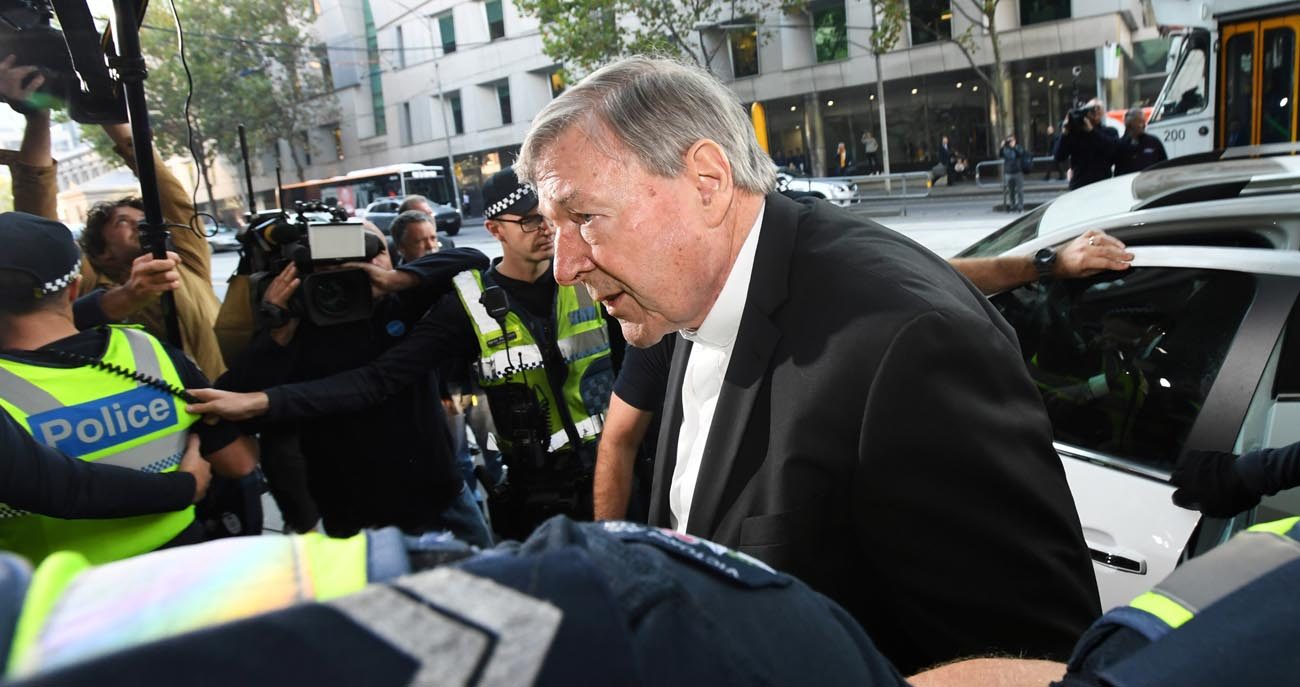 Cardinal George Pell, head of the Vatican Secretariat for the Economy, arrives at the Melbourne Magistrates Court in Melbourne, Australia, May 1. After a monthlong pre-trial hearing, an Australian magistrate ordered Cardinal Pell to stand trial on multiple charges of sexual abuse of minors, charges the cardinal consistently has denied. The magistrate dismissed some of the charges. (CNS photo/James Ross, via Reuters)

While dropping some of the charges, including what Cardinal Pell’s lawyer described as the most “vile,” Magistrate Belinda Wallington announced May 1 that she believed there was enough evidence presented in connection with about half the original charges to warrant a full trial.

The Melbourne court did not publish a complete list of the allegations, but news reports indicated they involved alleged sexual offenses committed in the 1970s at a pool in Ballarat, where then-Father Pell was a priest, and at St Patrick’s Cathedral in Melbourne in the 1990s when he was Archbishop of Melbourne.

The 76-year-old Cardinal Pell, head of the Vatican Secretariat for the Economy, took a leave of absence from his position in the summer of 2017 to face the charges. His lawyer told the court May 1 that he had already surrendered his passport.

A date for the jury trial could be announced as early as May 2.

The Vatican press office released a short statement May 1 saying, “Last year, the Holy Father granted Cardinal Pell a leave of absence so he could defend himself from the accusations. The leave of absence is still in place.”

Before leaving Rome, Cardinal Pell had told reporters at a Vatican news conference, “I’m innocent of these charges. They are false. The whole idea of sexual abuse is abhorrent to me.”

A statement issued by his attorneys after Wallington’s decision was announced said, “Cardinal George Pell has at all times fully cooperated with Victoria police and always steadfastly maintained his innocence. He voluntarily returned to Australia to meet these accusations. He will defend the remaining charges.”

The cardinal also thanked “all those who have supported him from both here in Australia and overseas during this exacting time and is grateful for their continuing support and prayers,” the statement said.

Archbishop Denis Hart of Melbourne “has declined to make any comment in relation to the decision of the magistrate Belinda Wallington to commit Cardinal Pell to face trial in the County Court,” said a note on the archdiocesan website. “Archbishop Hart expressed his confidence in the judicial system in Australia and said that justice must now take its course.”

NEXT: Catholic media must not fall behind in digital age, pope says