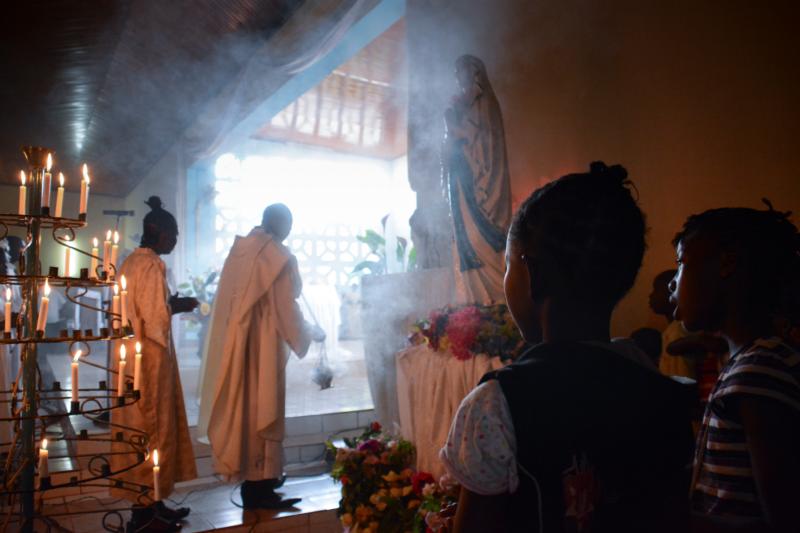 Faithful attend a Mass at St. Savior Catholic Church in Bangui, Central African Republic, in this 2015 file photo. The country’s Christian and Muslim leaders designated May 10-12 as days of prayers for peace and reconciliation. (CNS photo/Stringer, EPA)

“These unfortunate events signal a Machiavellian game plan by certain known, so-called friendly countries, with the connivance of certain compatriots,” the president of the Catholic bishops’ conference, Cardinal Dieudonne Nzapalainga, said in a declaration with Muslim and Protestant members of the country’s Platform of Religious Confessions.

“This is why we urge the general population, and particularly young people, wherever they find themselves, not to be dragged into hatred and violence, and appeal to all our nation’s living forces, as well as political parties, for greater solidarity in overcoming this lasting crisis.”

The religious leaders designated May 10-12 as days of prayer to safeguard the country “from the threat posed by its enemies.”

The declaration said the assault on Bangui’s Our Lady of Fatima Church by “a terrorist group of enemies of peace and social cohesion” had “deeply dismayed” religious leaders. The incident, which left 24 Catholics dead and 170 injured, reflected plans to “partition the country, make it ungovernable and ultimately turn it into a protectorate.”

They demanded the government and U.N. peacekeepers “do everything to find, apprehend and bring to justice the authors of these odious acts.”

U.N. troops remained on alert May 9 against further violence following the church attack, which the government blamed on remnants of Seleka, a rebel force that briefly seized power in 2013.

At least two people were killed and 10 injured in automatic fire between security forces and armed men May 6 in Bangui’s mostly Muslim PK5 district, as President Faustin-Archange Touadera attended the funeral of Msgr. Albert Toungoumale-Baba and other victims of the church attack.

PREVIOUS: Reborn in baptism, Christians are called to live like Christ, pope says

NEXT: See the yearning for peace in eyes of migrants, refugees, pope says