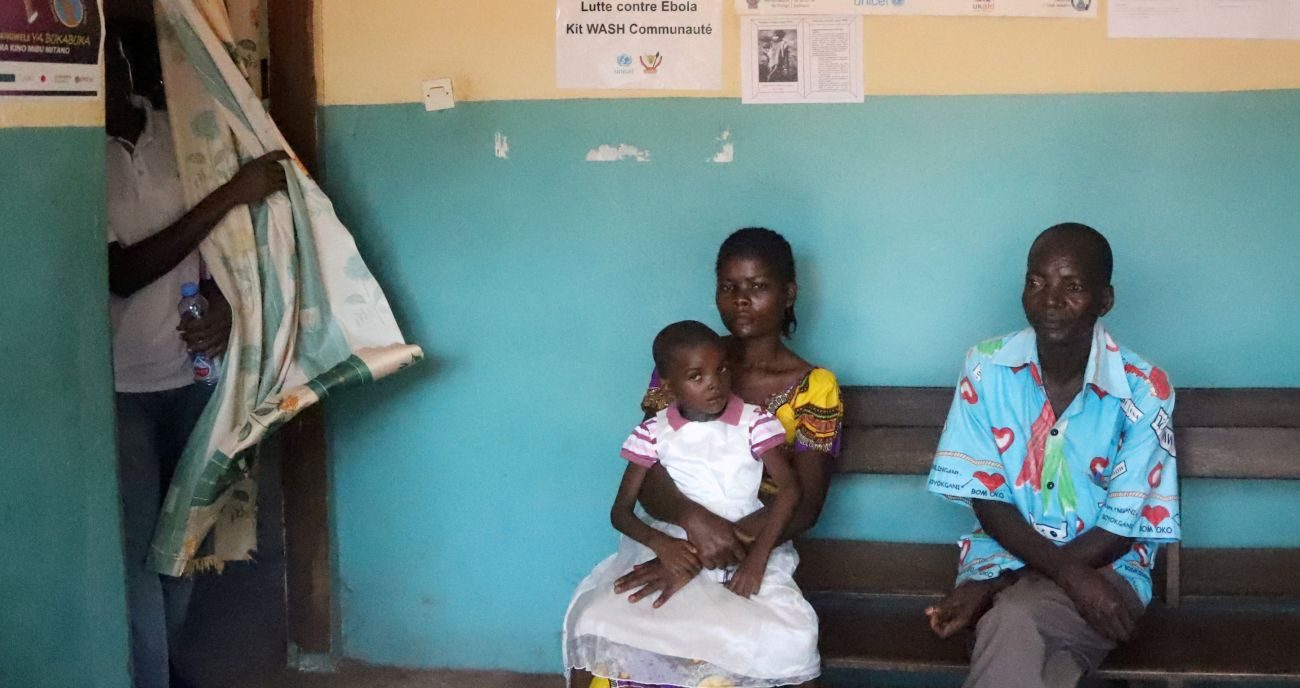 Patients seeking medical attention sit at the health center in Mbandaka, Congo, May 21, during the launch of a campaign aimed at beating an outbreak of Ebola. (CNS photo/Kenny Katombe, Reuters)

CAPE TOWN, South Africa (CNS) — Visits by church leaders to Ebola-affected communities in Congo are helping prevention efforts, while the urban nature of the latest outbreak of the deadly virus is of greatest concern, the country’s bishops said.

Katherine Overcamp of Catholic Relief Services said Coadjutor Archbishop Fridolin Ambongo Besungu of Kinshasa has been visiting and comforting the sick, including a priest.

The priest in Bikoro, a market town south of the northwestern provincial capital of Mbandaka, is “responding well to treatment,” Overcamp said in a May 24 telephone interview from Kinshasa, capital of Congo. She said the priest contracted Ebola while “taking care of someone who passed away.”

Ebola is a virus that causes hemorrhagic fever that spreads through contact with bodily fluids; it is highly infectious and extremely lethal. The virus can be fatal in up to 90 percent of cases, depending on the strain.

“The disease and its extreme effects can terrify people, and we work hard to avoid panic through education,” Overcamp said.

The outbreak had killed at least 27 people by May 24. It was first spotted near the town of Bikoro, about 60 miles south of Mbandaka. There are 28 confirmed Ebola cases, as well as 21 probable and two suspected cases, Congo’s health ministry said May 22.

The presence of Ebola in Mbandaka, a trading hub of 1.2 million upstream from Kinshasa, a city of 10 million inhabitants, “worries us deeply,” said Archbishop Marcel Utembi Tapa of Kisangani, president of the Congolese bishops’ conference.

“Given the nature of the disease and the lack of information, the risk of spreading in a city of 1.2 million inhabitants and in neighboring cities is to be feared,” Archbishop Utembi said in a statement.

Overcamp said the church is “greatly trusted and respected” in Congolese communities, noting that visits by Archbishop Ambongo, vice president of the bishops’ conference and administrator of the Archdiocese of Mbandaka-Bikoro, and other clergy and religious are “helping to get the message” of prevention across.

People need to know what symptoms to look for, how to protect themselves from infection, and how to get to treatment centers, Overcamp said. Communities are trying hard “to cope and to learn prevention mechanisms.”

Congolese are “very worried,” Overcamp said, noting that fears are rising along with the infection rate.

This is an “entirely normal reaction” as people start to see their loved ones getting sick, she said.

“We do not have much control as yet over preventing contact with patients, and that’s what is dangerous,” she said in a May 18 statement from Caritas Internationalis.

Caritas is “counting on the involvement of priests, men and women religious, teachers and nursing staff working in the affected areas,” the statement said.

The threat of the epidemic’s spread must “be taken seriously at provincial, national and regional levels,” Archbishop Utembi’s statement said.

He called on Congolese authorities and national and international organizations to take “the necessary measures to respond effectively to the emergency.”

Acknowledging the serious difficulties of people in affected areas, the archbishop urged them to trust in God’s help and to facilitate the work of health teams.

People should not fall into despair and resignation, nor “give in to fear and stigma that risk hindering” the response to the epidemic, he said.

In this outbreak, “what’s new is the vaccine effort,” Overcamp said, noting that the experimental vaccine that international aid groups and local authorities plan to deploy has been found to be very effective.

“We are encouraging people to take advantage of this cutting-edge vaccine,” she said.

The World Health Organization and others are using a “ring vaccination” approach, targeting the contacts of people infected or suspected of infection and then the contacts of those people.

With front-line workers at risk of contracting the virus, dozens of health workers in Mbandaka have already received vaccinations.

“There will be many lessons learned from the West African experience” of Ebola, which sickened more than 28,000 people and killed more than 11,000 in Sierra Leone, Guinea and Liberia, Overcamp said.

In the 2014-2016 epidemic, where large numbers of people were contracting the disease from touching the highly infectious dead bodies of victims, CRS — the U.S. bishops’ overseas relief and development agency — helped arrange “dignified, yet safe, funerals,” she said.

This outbreak is Congo’s ninth since the disease made its first known appearance near the northern Ebola river in the 1970s.

PREVIOUS: Everyone must have affordable health care, Vatican official says

NEXT: Gazans more desperate than ever after border clashes, says CRS official