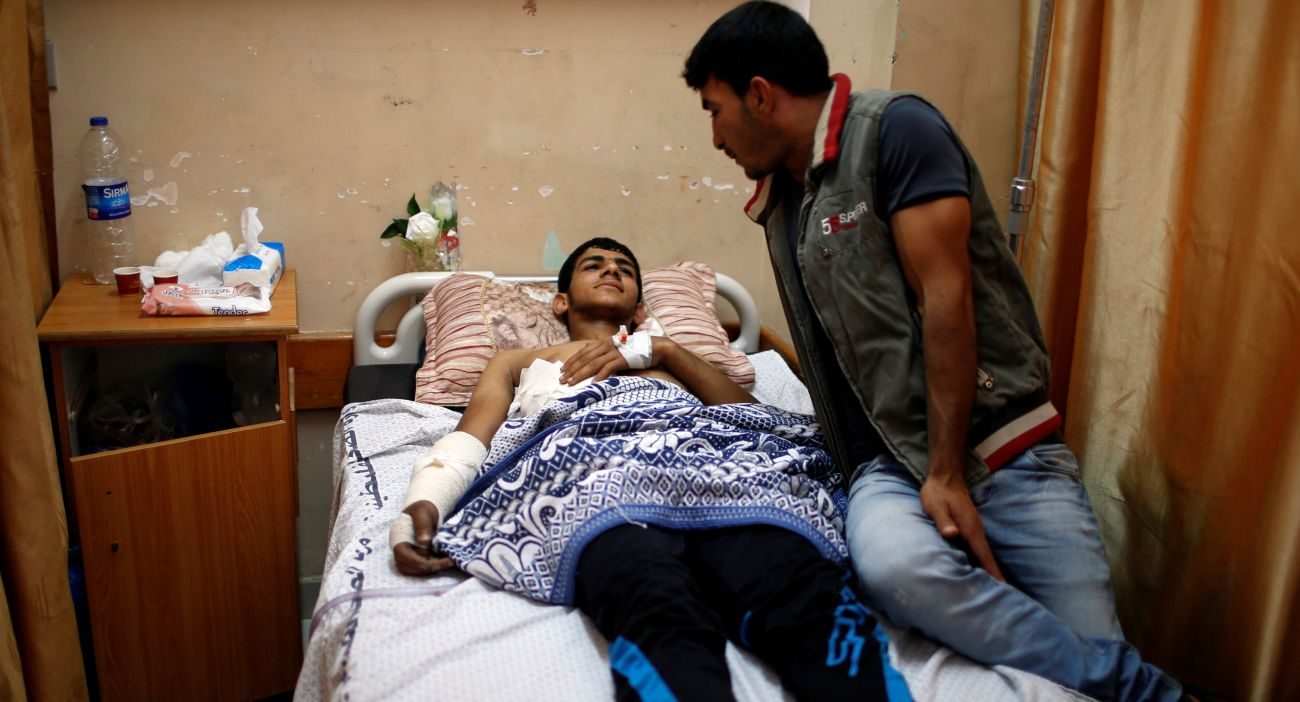 An injured Palestinian lies on a bed May 15 at a hospital in Gaza City. Already in a precarious state, Gaza's health system faces a medical emergency, with more than 1,000 people injured in the recent Gaza border demonstrations which flared up since March 30. (CNS photo/Mohammed Salem, Reuters)

JERUSALEM (CNS) — Already in a precarious state, Gaza’s health system faces a medical emergency, with more than 1,000 people injured in the recent Gaza border demonstrations that flared up since March 30.

Hilary Dubose, country representative for Catholic Relief Services, said hospitals have already been suffering from lack of medicine, proper medical equipment and enough electricity to run them, but the sudden swelling of injured patients has pushed the hospitals over the edge.

“They were pushed to the breaking point even before the demonstration injuries,” said Dubose, who visited Gaza May 22. “The injuries have pushed them (past) that point now. It is important that humanitarian actors support the medical system.”

Humanitarian organizations such as CRS, the U.S. bishops’ international relief and development agency that receives some of its funds from the U.S. government, are hampered in their work, she said. The government has withheld funds not only to UNRWA, the U.N. organization tasked with providing assistance to Palestinians refugees and their descendants, but also has put a hold on all U.S. funding to Palestinians pending an “administrative review.”

“We can’t provide any humanitarian aid. It is making the situation worse. We don’t know what impact it will have,” Dubose said, noting that there are 155,000 people going without humanitarian assistance in Gaza because of the freeze.

CRS has had to make drastic cuts in its programs, she said, and has retained only a skeleton staff in its Gaza office. CRS programs in the West Bank are not affected because those do not receive U.S. government funding, she said.

People are at the end of their ropes, said Dubose. Gazans get only four hours of state-provided electricity per day; 95 percent of water in Gaza contaminated; unemployment in Gaza is 44 percent among the general population and 62 percent among young people.

“People can’t earn a living and support their families. Young people can’t get married, because here to get married they need a house and a means of supporting their bride,” she said. “People can’t accomplish their very simple dreams of getting married and having a family.”

During her visit with the Missionaries of Charity in Gaza, she heard the story of a young man who had been engaged for two years but had not yet been able to marry because he had no way to support a family or provide a house.

“His sister told us that he had gone to the demonstrations feeling prepared to die, and he did,” Dubose said. “Conditions are bad, with no hope for change. There is so much hardship and frustration.”

After 11 years of an international blockade people are getting desperate, she said. There is a lack of freedom of movement, and young people are unable to travel for job or educational opportunities, she said. If there were some signs of hope, of change, people would not feel so desperate, she added.

“There has really been marked shift in (the ability of people to hope.). People are really reaching levels of frustration I have not witnessed before,” said Dubose. “It is so claustrophobic. People are so stuck. There is a loss of hope.”

NEXT: Remains of St. John XXIII begin pilgrimage in his home diocese