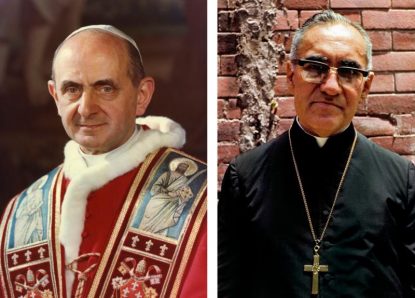 Pope Francis has cleared the way for the canonizations of Blesseds Paul VI and Oscar Romero. They are pictured in undated combination photos. (CNS photos/files/Octavio Duran)

VATICAN CITY (CNS) — The Vatican announced that final approval would be given May 19 for the canonizations of Blesseds Paul VI, Archbishop Oscar Romero and four others.

Pope Francis already cleared the way for their canonizations earlier this year with the publication of decrees recognizing a miracle attributed to the intercession of each one of the blesseds.

The Vatican said May 3 that an “ordinary public consistory” — a meeting of the pope with cardinals resident in Rome and invited bishops and other dignitaries — would be held May 19 to finalize the approval of six canonizations. This meeting of cardinals and promoters of the sainthood causes formally ends the process of approving a new saint.

The dates and locations for the canonization ceremonies are expected to be announced shortly after the consistory.

Meanwhile, Cardinal Pietro Parolin, Vatican secretary of state, has said that Blessed Paul’s canonization will take place at the end of the Synod of Bishops on youth and discernment, scheduled for Oct. 3-28.

The other men and women to be canonized include: Father Francesco Spinelli of Italy, founder of the Sisters Adorers of the Blessed Sacrament; Father Vincenzo Romano, who worked with the poor of Naples, Italy, until his death in 1831; Mother Catherine Kasper, the German founder of the religious congregation, the Poor Handmaids of Jesus Christ; and Nazaria Ignacia March Mesa, the Spanish founder of the Congregation of the Missionary Crusaders of the Church.

NEXT: Pass on faith through deeds, not words, pope says