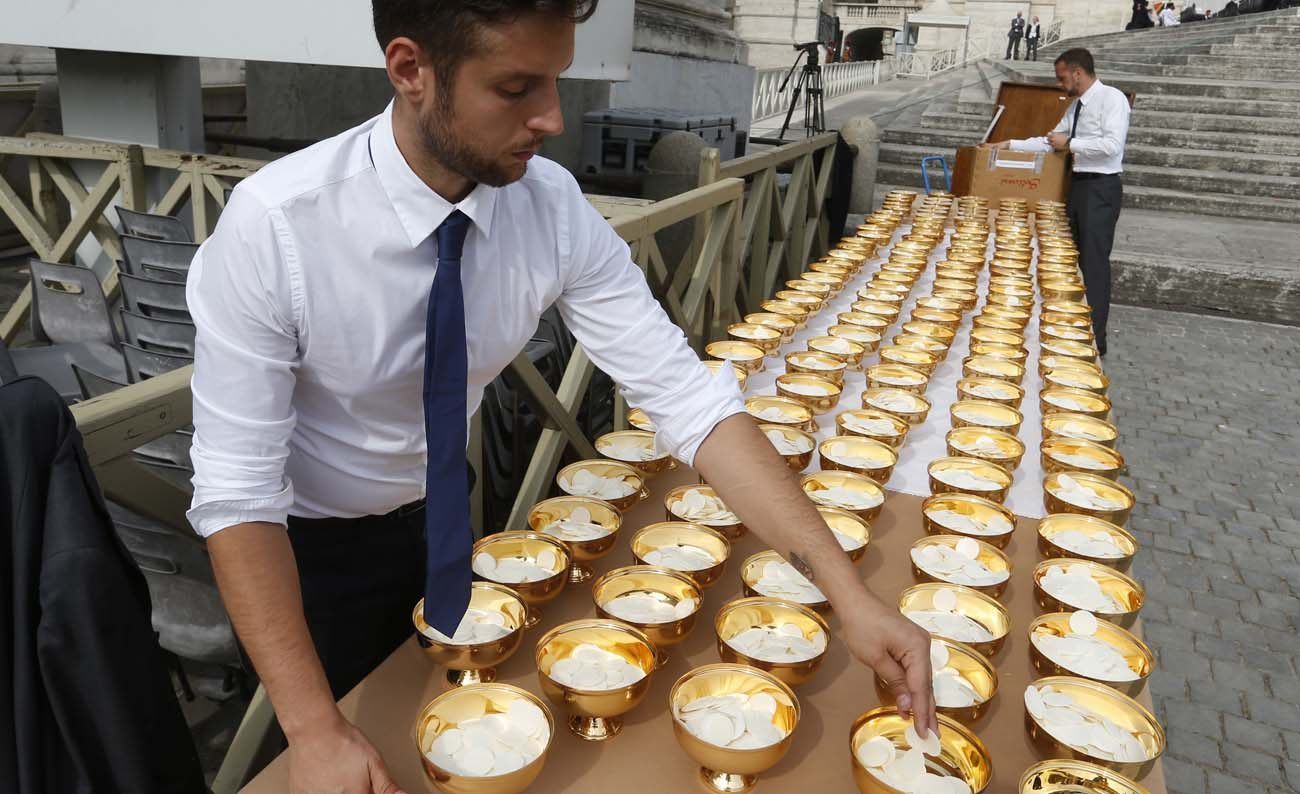 An assistant prepares ciboria of hosts for Communion before Pope Francis' celebration of Mass marking the feast of Pentecost in St. Peter's Square at the Vatican June 4, 2017. Six German bishops are meeting with Vatican officials to discuss a proposal to allow greater access to the Eucharist for Protestants married to Catholics. (CNS photo/Paul Haring)

VATICAN CITY (CNS) — The German bishops are not the only bishops in the world to propose or adopt pastoral guidelines for allowing an Anglican or a Protestant married to a Catholic to receive the Eucharist under certain circumstances.

In fact, the Pontifical Council for Promoting Christian Unity encouraged bishops and bishops’ conferences to develop such guidelines in its 1993 “Directory for the Application of Principles and Norms on Ecumenism.”

The bishops’ conference of Germany has not released its guidelines publicly, but the dispute that the guidelines provoked seemed to indicate that the circumstances they envisioned for eucharistic hospitality were more a matter of regular occurrences than special occasions.

Although two-thirds of the German bishops approved the draft guidelines, seven of the bishops wrote to the Vatican’s Christian unity council and the Congregation for the Doctrine of the Faith questioning whether the guidelines could be described as “pastoral” — therefore, the responsibility of the bishops’ conference — or whether they had crossed the line into touching on the faith and unity of the church itself, thus requiring Vatican approval.

The Vatican press office announced April 30 that six German bishops, including a cardinal promoting the guidelines and a cardinal objecting to them, would meet May 3 at the Vatican with top officials from the pontifical council and the doctrinal congregation.

Bishops from Europe, North America, Australia and southern Africa have issued guidelines for allowing interchurch couples to go to Communion together on special occasions; most list those occasions as family funerals and the baptism, first Communion, confirmation, ordination or wedding of their children. Some bishops also include the couple’s wedding and wedding anniversaries, as well as Christmas, Easter and Pentecost.

From region to region the guidelines reaffirm Catholic teaching that, as the directory said, “Eucharistic communion is inseparably linked to full ecclesial communion and its visible expression.”

Full, regular sharing of the Eucharist will be possible only when the Christian churches experience full, corporate and visible unity, the Catholic Church continues to teach.

But, the directory also said, the Catholic Church “also recognizes that in certain circumstances, by way of exception, and under certain conditions, access to these sacraments may be permitted, or even commended, for Christians of other churches and ecclesial communities.”

The directory — and bishops around the world who have issued guidelines — make special pastoral provisions for a married couple made up of a Catholic and a member of another mainline Christian church when both spouses are baptized in Christ and united in the sacrament of marriage, raising children and attending church together.

But when the Southern African Catholic Bishops’ Conference (which includes the bishops of South Africa, Swaziland and Botswana) in 1998 issued guidelines that went beyond listing special occasions when the non-Catholic spouse could receive Communion, they were asked first by the pontifical council and then by the doctrinal congregation to make revisions.

The final version was published in 2003 and, most notably, eliminated a paragraph that had been in the revised version published in 2000. The passage removed spoke of the “unique situation” of interchurch couples and how their sacramental marriage bond “seeks to be expressed and deepened by the unity of the couple at the eucharistic table.”

The deleted paragraph left open the possibility that the non-Catholic spouse could experience “serious spiritual need” each time he or she goes to Mass with the family; still, it said, the parish priest must refer the couple to the local bishop before the couple could regularly receive the Eucharist together.

The bishops’ conferences of England and Wales, Ireland and Scotland jointly issued guidelines in a document called “One Bread One Body” in 1998, insisting that sharing Communion was possible only when there is “a danger of death or if there is some other grave and pressing need.”

But, they said, the “grave and pressing need” at times could include “a unique occasion for joy or for sorrow in the life of a family or an individual. It is for the diocesan bishop or his delegate to judge the gravity of the need and the exceptional nature of the situation.”

“What do we mean by a ‘unique occasion’ in the life of a family or an individual?” it said. “We are thinking of an occasion which of its nature is unrepeatable, a ‘one-off’ situation at a given moment which will not come again. This may well be associated with the most significant moments of a person’s life, for example, at the moments of Christian initiation (baptism, confirmation, first Communion), marriage, ordination and death.

“The conditions of canon law must always be fulfilled,” the text continued. And “the exceptional nature and purpose of the permission should be made clear, and appropriate preparation should be made for the reception of the sacrament.”

The U.S. bishops’ brief guidelines, published in 1996, said, “Members of the Orthodox churches, the Assyrian Church of the East and the Polish National Catholic Church are urged to respect the discipline of their own churches. According to Roman Catholic discipline, the Code of Canon Law does not object to the reception of Communion by Christians of these churches.”

For Anglicans and Protestants, the situation is more complicated and Catholic church law requires that they “manifest Catholic faith in this sacrament,” as the directory phrased it.

Shared faith in the real presence of Christ in the Eucharist is not unlikely, however, because it formally has been affirmed over the course of more than 50 years of formal theological dialogue between the Catholic Church and the Anglican and mainline Protestant churches.

Therefore, the norms published by the Diocese of Rockville Centre, New York, in 1999 stated, “Episcopalians and Lutherans can be presumed to believe in the real presence. For members of other communions there may be need for some further discussion concerning their belief in the Eucharist.”

At the same time, the 2008 guidelines of the Diocese of Saskatoon, Saskatchewan, said, “the church does not require other Christians to have more knowledge of the sacrament or more faith and holiness than the Catholic faithful have. This principle is particularly pertinent in applying terms of the law that speak of the other Christian ‘manifesting Catholic faith’ in the sacrament, having the ‘proper disposition’ and being in ‘spiritual need.'”

The Vatican, bishops, bishops’ conferences, pastors — particularly in places where interchurch marriages are common — and couples who regularly attend services at each other’s churches continue to discuss the limits and possibilities of eucharistic hospitality.

Those discussions, the ecumenical directory said, should lead to prayer and a greater commitment to working for Christian unity.

“When members of the same family belong to different churches and ecclesial communities, when Christians cannot receive Communion with their spouse or children, or their friends,” the directory said, “the pain of division makes itself felt acutely and the impulse to prayer and ecumenical activity should grow.”

NEXT: Date set for final approval of canonization of Blesseds Paul VI, Romero